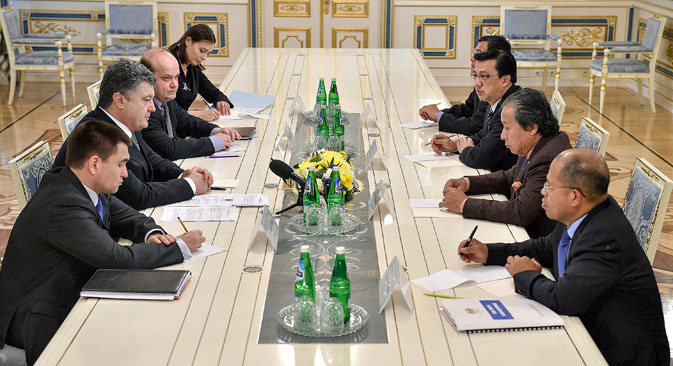 Gazeta.ru reports that Ukraine’s Verkhovna Rada may hold a closed session, the main topic of discussion being the introduction of martial law in the Donbass. Source: Reuters

RBTH presents a selection of views from leading Russian media on the latest developments in Ukraine following the July 17 Boeing 777 catastrophe in Ukraine's Donetsk Region, including the appointment of a Russian aviation official to the investigation commission, and reports on the possibility of martial law being declared by President Petro Poroshenko.

The newspaper Kommersant reports that an employee from the Interstate Aviation Committee (IAC) (an executive body of 11 former Soviet states, headquartered in Moscow) has been included in the international commission investigating the Boeing crash in the Donetsk Region. By participating in the investigation, the official will have the right to oversee its objectivity and even officially express disagreement with his colleagues’ conclusions, the newspaper writes.

However, disagreements are unlikely to arise among the members of the commission, as they are merely tasked with “confirming that the airliner was serviceable, its pilots did not commit any errors, and the crash was caused by shelling,” Kommersant reports. The representative from the IAC is a Russian expert.

Kommersant stresses that if the IAC official deems the investigation subjective or politically biased, he will be able to express his official disagreement with the results. However, in the newspaper’s view, the political significance of a Russian being invited to participate in the investigation should not be over-exaggerated.

“Obviously, questions regarding who shot down the Boeing, and whether or not the attack on a civil aircraft was an accident or deliberate, will remain behind the scenes of the international investigation,” the newspaper writes.

The military authorities and members of the Russian, Ukrainian, and U.S. special services will continue to debate politics, “although these people, in contrast with the technical experts, are unlikely to ever be able to reach a consensus,” Kommersant reports.

According to Nezavisimaya Gazeta, Ukrainian president Petro Poroshenko regularly claims that a war is being waged against Ukraine, but he is refusing to declare martial law. During a meeting with representatives of parliamentary factions and groups, the Ukrainian president explained that martial law would mean a pause in lending from the International Monetary Fund (IMF) and a ban on supplies of military and dual-purpose commodities to Ukraine, the newspaper writes.

“Representatives of the presidential team also believe that martial law would make it impossible to hold parliamentary elections in the East, which means that residents of the Donetsk and Lugansk regions won’t be able to vote,” Nezavisimaya Gazeta reports.

Moreover, western experts are only just starting to investigate the Boeing crash, while “Kiev is confidently stating that the plane was shot down by the militias, which received a missile system from Russian territory,” the newspaper writes.

Owing to this, Ukraine could make a show of imposing sanctions against particular individuals in the Russian government. For example, a few days ago, the Ukrainian Interior Ministry initiated an investigation against Russian Defense Minister Sergei Shoigu and Russian businessman Konstantin Malofeyev, who are suspected of organizing military-technical aid for the breakaway Donetsk and Lugansk people’s republics.

“With regards to sector sanctions, they could affect enterprises in the military-industrial complex, machine- and aviation-building, and the space industry. These are highly sensitive, high-tech fields,” a Nezavisimaya Gazeta analyst writes. According to him, “exports of Russian goods to Ukraine are not as substantial as Ukrainian deliveries to Russia,” and Ukrainian producers will have to search for new sales markets. Kiev says the sanctions could affect several Russian banks, but only in the case that the Ukrainian security services proves their implication in “financing terrorism.” However, Nezavisimaya Gazeta’s analyst doubts that this will happen. 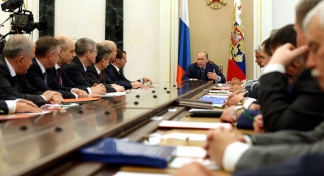 Gazeta.ru reports that Ukraine’s Verkhovna Rada may hold a closed session, the main topic of discussion being the introduction of martial law in the Donbass. The attempt to prevent early parliamentary elections can clearly be traced to the desire to change the status of the regions affected by the armed conflict, according to Vladimir Fesenko, chairman of the management board of the Penta Center for Applied Political Research.

Ukrainian law indicates that only the president can decide to implement martial law. Accordingly, the parliamentary deputies cannot force Petro Poroshenko to introduce martial law; they can only urge him to do so. Besides that, martial law is coupled with the possibility of confiscating private property, even living quarters, to meet the army’s needs. This, according to Gazeta.ru, will “hardly increase the popularity of hostilities.”

Read more: The media battle over MH17: The Kremlin vs. the world