Will there finally be a payoff for Yukos investors? 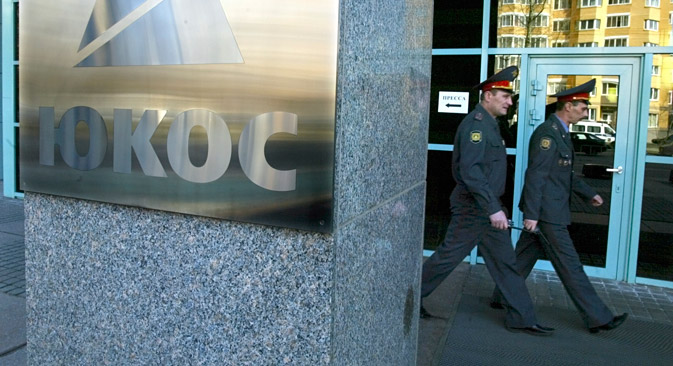 Yukos building in the beginning of 2000-s. Source: AP

A court in The Hague has issued a $50 billion judgment against Russia, but getting the country to pay up is no easy task.

The former shareholders of Yukos, once Russia’s largest oil and gas company, have won a $50 billion judgment against Russia in the Permanent Court of Arbitration in The Hague. If Russia fails to prove its case on appeal, any of the country’s overseas assets not being used for representational purposes may be seized at the plaintiffs’ request.

According to the ruling, published on July 28, Russia, as the losing party, must return around $50 billion to the former shareholders. This amount includes the 70 percent of the company that belonged to the plaintiffs, as well as uncollected dividends with a discount for risk. The amount is essentially compensation for the company’s bankruptcy and sale of its assets in 2004.

According to the arbitration, Russia violated the Energy Charter Treaty when in 2004 it de facto expropriated the oil company from its legitimate owners by putting the oil company Yuganskneftegaz, a key asset of Yukos, under the control of state oil major Rosneft.

Foreign Minister Sergei Lavrov and representatives of the Ministry of Finance said that Russia will appeal the arbitration decision in Dutch courts. According to officials, the appeal will be based on the grounds that Russia has not ratified the Energy Charter, but only signed a merger agreement, which means that The Hague did not have jurisdiction over the case.

Regardless of the result of the appeal, the news is not good for Russia’s economy. The Hague tribunal named Rosneft and Russian gas monopoly Gazprom as beneficiaries of the Yukos bankruptcy, which means that their overseas assets are up for grabs. “Since Gazprom and Rosneft were involved in the case as co-defendants of the Russian Federation, the decision to recover $50 billion also extends to them,” said Dmitry Gorbatenko, a lawyer at the law offices Pleshakov, Ushkalov, and Partners. According to Gorbatenko, this means that it is possible to divert the payment of compensation at the expense of Gazprom and Rosneft, and in the worst case, to seize their assets abroad.

Alexei Kozlov, chief analyst at the UFC investment company, sees the effects of the current geopolitical situation in the ruling.

“Certainly, the decision has a large political component. For Russian companies, the court's decision lies in the general field of countering Russian business activities,” Kozlov said.

Russia has 10 days from the announcement of the court ruling to file an application to appeal the decision in Dutch courts, said Vladislav Tsepkov, a senior partner at the law offices of Urlov and Partners. According to him, Russia has until January 15, 2015 to repay the plaintiffs. Otherwise the judgment will begin to accrue interest.

There is a precedent for the seizure of Russian assets following judgments handed down by foreign courts. The most well-known case occurred in 1993, when a Luxembourg court upheld a claim against Russia filed by the Swiss firm Noga. The claim was for $300 million, and for several years the company seized Russian assets, including warplanes, an exhibition of paintings and money from the foreign accounts of state-owned companies. However, in 2009 the U.S. Federal Court of Appeals rejected Noga’s claim against Russia.

In 1998, German entrepreneur Franz Sedelmayer won about 2 million euro from Russia in a Stockholm arbitration court. His payoff was a long time coming, however. In 2010, the Stockholm court seized the Russian trade mission building in Sweden, and in February 2014, the building was sold at auction and the money paid to Sedelmayer.

Experts predict that if Russia fails to overturn the court’s decision on appeal, the plaintiffs in the Yukos case will also seek Russian assets abroad for sale. According to Gorbatenko, seizures may be made of “absolutely any asset belonging to the Russian Federation that is not covered by state immunity.”

Vitaly Tsvetkov, head of the information analysis department at Russian consulting firm Gradient Alpha, said that the property covered by state immunity is defined as foreign property used for state needs and includes embassies, consulates, and representative offices. Tsvetkov said that Russia does not have $50 billion worth of commercial property outside of the country. “The foreign assets that belong to state-owned companies are under threat, but there has been no legal precedent to seize this type of real estate. Therefore, litigation over these assets will be lengthy and complicated,” Tsvetkov said.