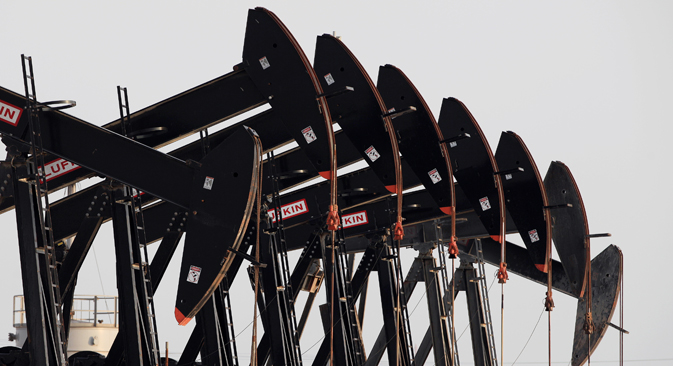 A new agreement between Russia and Iran envisages closer economic cooperation between Moscow and Tehran, including an oil contract worth up to $2.35 billion per year. The 5-year deal is the latest move in a growing struggle between global competitors to stake a claim to the Iranian market.

Russia and Iran have signed a Memorandum of Understanding for a period of five years, signaling a sharp intensification in economic cooperation between the two countries. The document, signed on August 5, lays the foundation for a comprehensive multi-billion dollar deal for trade in the oil sector between the two nations.

“The memorandum provides for the expansion of trade and economic cooperation in the fields of construction and reconstruction of power generating capacity, the development of power grid infrastructure, the oil and gas sector, as well as the supply of machinery, equipment and consumer goods,” read a statement by the Russian Ministry of Energy.

The ministry clarified that specific contracts within these areas will be discussed in Tehran on September 9-10 at the meeting of the Intergovernmental Commission of the Russian Federation and Iran.

Oil in exchange for goods

First and foremost the deal concerns the purchase of Iranian oil by Russia. Initially, the sides discussed very large quantities – up to 25 million tons per year, which is about a quarter of all Iranian oil. Now, according to Kommersant, the sides have agreed to a more modest volume, in between 2.5-3 million tons per year. Iran will sell its oil slightly cheaper than the cost of Brent, and the annual contract could reach $2.35 billion.

But even 3 million tons per year, which is 1.5 percent of Iran’s own production, is a significant amount, according to Investkafe analyst Gregory Birge, who points out that this amount represents 10 percent of Russia’s oil exports to Asia-Pacific and 2 percent of its oil exports to EU countries.

“For the oil market, it's a significant amount, especially if sanctions imposed against Russia in the future adversely affect the level of domestic production of oil,” said Birge.

Russia may re-export the Iranian oil in raw form, or it could be processed and exported as petroleum products, or it could also be used in the domestic market.

The main problem with cooperation in the oil sector remains finding supply options that would be possible under the existing oil embargo on Iran. Previously, Russia considered the supply chain in Belarus and Ukraine, where Russian companies have a processing capacity. But this possibility was abandoned for political reasons. Now it is assumed that the main direction of supply will be China and consumers in Africa (possibly South Africa).

In addition to crude oil, Iran can supply Russia with “petrochemicals, cement, carpets, processed fruit, and vegetables,” said the Russian ambassador to Tehran, Levan Dzhagaryan. Iran intends to use the proceeds to buy products and services from the Russian Federation. According to Mehdi Sanai, the Iranian ambassador in Moscow, Tehran is interested in purchasing Russian machinery, rails, heavy trucks, metals, and grain.

The agreement between the two countries also involves the participation of Russian companies in projects in Iran for the construction and reconstruction of power plants and networks. Therefore, according to the ambassador, Tehran is interested in Russia's participation in the electrification of its railway network.

Iran is also considering the possibility of purchasing several hundred megawatts of electricity from Russia. In addition, the ambassador said Tehran would welcome the launch of joint projects to create mini-refineries in Iran and develop gas fields there.

Sanctions have accelerated cooperation with Iran

According to experts, the signing of the Russian-Iranian Memorandum right now has largely been made possible due to the aggravation of relations between Russia and the West.

“Moscow has invested a lot of effort in finding a diplomatic solution to the Iranian nuclear issue and was ready to refrain from actions that could cause a sharp reaction from the United States. But the situation has changed,” said Kommersant PIR Center expert Andrei Baklitsky.

“Russia is now much less interested in listening to the recommendations of the U.S.,” continued Baklitsky, who added that Iran, whose importance to the West has greatly increased, in connection with the events in Iraq and the search for alternatives to Russian hydrocarbon, now has more freedom to maneuver.

“Furthermore, before, Moscow had to consider the threat of U.S. sanctions for violating the oil embargo against Iran; but now, when the Russian oil sector has also been hit by sanctions, this factor of less importance,” he said.

Another reason for the rapid implementation of Moscow’s plans in relation with Tehran – as experts are calling it – is the intensifying struggle to win the Iranian market. Since late last year, when the process of lifting sanctions against Iran began, representative business delegations from China, the UK, Germany, France, Italy, Austria, Sweden, and some other countries have already visited Tehran.

A few days ago, Reuters and The Wall Street Journal, citing sources from German industrial companies, reported that because of the situation surrounding Ukraine and the U.S. and the EU-backed sanctions against Russia, German businesses may redirect their investments in the Russian economy to Iran. The German Chamber of Commerce predicts, after sanctions against Tehran will be further weakened, that annual German exports to Iran will reach 10 billion euros (in 2013 they amounted to 1.85 billion euros).