Evolution or revolution? The rise and rise of luxury hospitality in Russia 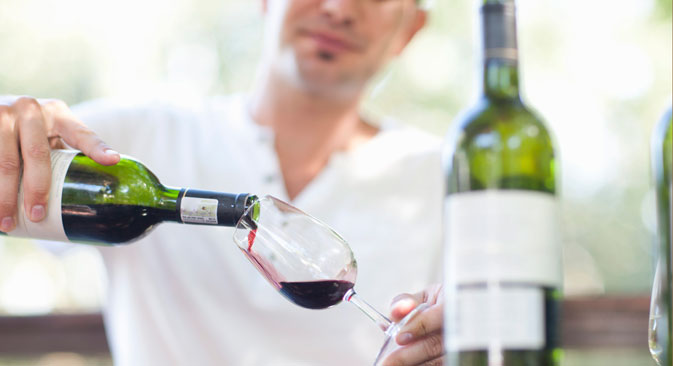 As the industry develops and more players enter an increasingly competitive wine market, it will be interesting to see what trends emerge in the next five years. Source: Photoshot / Vostock Photo

From expensive champagne to fine-dining restaurants and exclusive bars, both experts and industry insiders agree that Russia's luxury food and drink sector is taking off.

Let’s banish the tired cliché of Russians consuming copious amounts of vodka, the sugary champagne wannabe Sovetskoye Shampanskoye and little else. The past 15 years have seen a sustained growth and development in the Russian fine-wine market, with imported luxury labels now commonplace across urban Russia’s increasingly glamorous restaurants, bars and nightspots.

Russians are becoming more discerning in their wine choices, which has helped give rise to a burgeoning hospitality scene with hundreds of key players and, crucially, an evolving pattern of consumer behaviour.

Russians who lived through the economic turmoil of the Eighties and Nineties will hardly recognise the wine and hospitality landscape of today. President Mikhail Gorbachev’s series of domestic reforms aimed at reducing alcohol consumption and production almost killed the wine market in Russia in the Nineties. Per capita consumption plummeted and recovery came only in the early 21st century.

However, imports of wine are growing. According to the International Wine and Spirits Research group (ISWR), Russia imported more than 7pc more Italian labels in 2013 than 2012. Russians are drinking more French and Spanish wines, too.

Wine is the fastest-growing sector of the alcohol market, although there are important caveats. First, low-cost domestic produce continues to dominate; second, a lot of imported wine is of the cheaper variety.

Helen Windle, an IWSR analyst, says: “The fine wine market is smaller, but has grown as the wealth of the nation, and that of the emerging middle class, has grown. There are now many specialist wine shops offering advice, and many importers have focused on educating waiters and sommeliers in restaurants about wine choices and food pairing.”

Her analysis of the market is echoed by insiders working in Russian hospitality. While the growth across the hospitality trade is limited to the major urban centres of Moscow and St Petersburg, and to a lesser extent Kazan, Novosibirsk and Ekaterinburg, there is potential for sustainable growth. “Today, the Moscow restaurant and bar scene is characterised by dynamic development; new restaurants are opening every week, and there are suggestions for every taste,” says Novikov sommelier Anna Aprelkova.

Anton Galkin, head sommelier at the Ritz-Carlton Moscow, agrees, adding: “I would say that there is a gastronomic boom in Moscow; the number of wine bars is also growing.”

This has presented new opportunities for importers and distributors. According to Mr Galkin, over the past five years the number of wine-trading companies has increased by an average of three per year so the market is now brimming with luxury labels.

At first glance, this may suggest wealthy Russians are slavishly following the most recognisable brands – such as Cristal and Lafite – without any real interest in the culture of wine appreciation. The reality is more complex. “Many successful people are seriously developing an interest in wine: reading professional literature, visiting wineries, tasting wider varieties. Demand is becoming more selective; people know exactly what they want and the price for this wine,” says Ms Aprelkova.

Mr Galkin agrees, but sees the process as evolutionary rather than revolutionary. “In general, Russian consumers are becoming more adventurous. However, if we are talking about the affluent clientele, they remain quite conservative in their taste, preferring French grand cru wines.”

The trade agrees that certain brands still carry great sway with wealthy customers. “In our restaurant, the bestsellers are renowned manufacturers, such as Leflaive, Angelo Gaja and Trimbach,” says Ms Aprelkova. “ I am inclined to hope that guests will be more open to experiment in a few years, and we can then offer them something truly unique.”

Regardless of how Russia’s collective palate evolves, from a commercial standpoint the imported wine market’s growth means good business. This expanding empire of food and drink has created a new demand for skilled professionals. As a result, in 2012 the sparkling wine producer Abrau-Durso opened the Krasnodar Region’s first gastronomy school. If it’s successful, others will surely follow.

Russian wine: Measuring up to the competition

As the industry develops and more players enter an increasingly competitive wine market, it will be interesting to see what trends emerge in the next five years. With the quality of Russian wine from niche producers increasing, will even the more discerning Russians revert to domestic produce for their evening tipple? And with Crimea and its wine makers finding easier access to Russia’s large market, it may be that imports will have to fight harder to retain their share of the pie.

“We are including a selection of the best local wines on our wine list and launching Russian wine tastings in a month or so,” says Mr Galkin. "High-quality Russian wines have their own character that I’m sure our guests would appreciate.”

With high taxes on imported alcohol and import licences costing more than a million roubles, domestic wine has a major head-start over imports. Whether these newer, quality-led Russian players can compete with the prestige attached to the big names of France and Italy remains to be seen. However, Mr Galkin believes that the top-end prices of certain wines will fall, as rising costs push them beyond all but the super-rich.

Ms Aprelkova agrees: “I have noticed the growing sophistication of our guests, they are travelling a lot all over Europe and tasting the best wines at local prices, so they are reluctant to pay exorbitant prices in Moscow.”

Today, despite a few ups and downs, there have been more winners than losers in the wine trade. And, whatever direction the industry takes, one thing is certain: there is no going back to the dark days of the Gorbachev era.

In the Eighties, a school leaver wishing to enter the sommelier profession would have found the choices sorely wanting. Now, as Russia’s growing middle class continues to get a taste for the finer things in life, this career choice may present an opportunity as exciting as it is unusual.