A matter of principle: Managing finances in Russia, sharia style 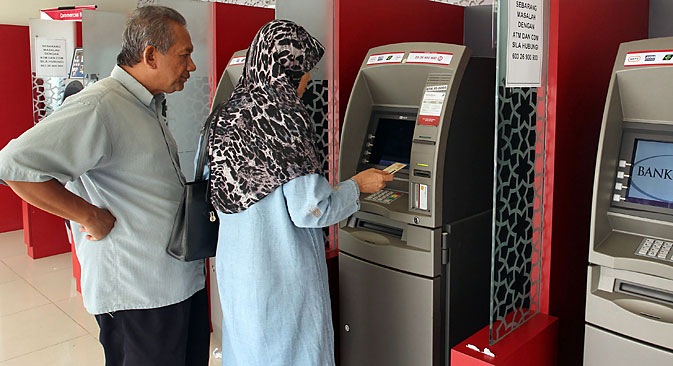 Islamic banks in Russia are in a rather tricky position from the point of view of their legal status, taxation and contractual relations. Experts attribute it to the lack of the relevant laws and regulations and to the overall lack of awareness among the general public about what Islamic banking is. However, the sector is now being actively developed and shows promise for the future.

One of the success stories in global finance of the last few decades has been the rise of Islamic banking, with $822 billion worth of assets being managed in banks compliant with Islamic principles around the world by 2009, according to banking industry publication The Banker.

The work of any Islamic bank is based on sharia norms, which prohibit charging or paying interest (riba), require it that transactions be linked to real assets and ban speculation. In addition, Islamic banks do not finance alcohol, tobacco and gambling business or the production of pork.

However, although the sector has been forging ahead in many parts of the world, including many western countries, sharia-compliant banks have found the going tougher in Russia. The country’s first Islamic bank, Badr-Forte, appeared back in 1991, but five years later it was stripped of its license by the Central Bank “in connection with the bank’s failure to implement federal laws …and the repeated violation during the course of a year of the federal law “On counteracting the legalization (laundering) of criminal proceeds, and the financing of terrorism”.

Since then there have been no attempts to establish a purely Islamic bank in Russia. However, several organizations that function in a similar way to Islamic banks have appeared in the country during the last five years.

A partnership, not a bank

The main difficulty that Islamic banks come up against in Russia is that under the law on banks and banking, a loan is a paid service. Whereas under the requirements of Islamic economics a loan is granted free of charge, explains the head of the economic department at the Russian Council of Muftis, a member of the coordination council of the Russian Association of Experts in Islamic Finance, Madina Emirovna Kalimullina.

Since Islamic banks do not view granting loans as a source of profit, their work is limited to two areas: joint ventures, i.e. direct investment and shareholdings (mudaraba and musharakah), and trade, i.e. selling goods at a mark-up (murabahah). However, Russian laws limit banks' rights to have shareholdings and engage in trade, which creates challenges for Islamic banks in the country.

"In order to overcome these restrictions, entities are set up not as banks but as other legal forms, for example trust partnerships, partnerships, trade companies, consumer societies, etc., which perform the functions of Islamic banks," Kalimullina explains.

However, she adds, to have full-fledged operations, these entities need to be able to provide cash and settlement services and be able to perform other, purely banking, operations. That is why the issue of creating the necessary legal framework for Islamic banking in Russia is very much on the agenda.

In addition to difficulties in the legal field, Islamic banks also have to deal with the problem of additional taxation on financing. Ordinary banks are exempt from VAT on financing, whereas Islamic financial institutions have to bear an additional tax burden since they buy and resell assets.

"Under sharia law, one cannot sell goods that one does not own. If a company needs money to purchase equipment, a bank buys the necessary equipment and sells it at a premium," explains Isa Maadinovich Maadinov, manager of the Masraf financial house. In Western countries, there are special tax breaks for transactions like these.

"Islamic banking is based on principles of cooperation between the bank and the client on a project. It follows that the bank shares profit from the project with the client. The client knows what project the bank invests in and fully shares in the risks," says Investcafe analyst Mikhail Kuzmin, adding that Islamic banks usually invest in real estate and target-specific projects.

As for contractual relations, Islamic banks are banned from changing contract terms and charge interest on an overdue payment, which some unscrupulous clients often take advantage of.

"Honesty – this is our problem," says head lawyer at the Tatarstan International Investment Company, Maya Mazo. "To avoid complications, we pay particular attention to checking our counterparties. Our partners' managers must adhere to sharia norms, this is the only way we could guarantee that all obligations will be met."

The sector is ready to develop

Despite all the difficulties, Islamic banks in Russia are determined to stick to their principles. "We are not afraid of sharia norms. What we are afraid of market-economy norms and the danger that Islamic banks may not be able to survive the competition," says Masraf manager Maadinov.

Russia has made some headway in developing Islamic banking: Contacts with foreign Islamic organizations have been established; an expert community has been built; Islamic economic education and training programs have been developed, and efforts have been made to widen awareness of the norms of Islamic financial operations.

Of the Russian regions, Tatarstan has the best developed Islamic banking sector. The Volga republic accounts for a third of all sharia transactions in Russia, to the tune of $1-2 billion. In experts' estimates, the market of Islamic financial instruments has a development potential of $1,500 billion.

"There are prospects but without support from the state, we are unlikely to succeed. As far as I am aware, the Central Bank has already received a query on providing incentives for this sector. The establishment of the Eurasian Union should promote the development of Islamic instruments," Maadinov concludes.

Russia in the context of Islam business banks