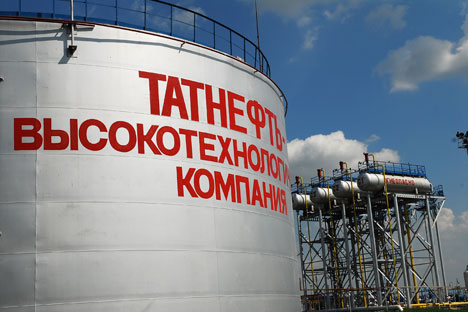 The Tatarstan oil firm Tatneft has won a case against the Ukrainian state over what was seen as an illegal takeover of oil company Ukrtatnafta in 2007. Tatneft previously held a controlling stake in the Ukrainian firm. However, Ukraine intends to appeal against the ruling before the end of the month.

The Russian oil company Tatneft has won a case against Ukraine in the International Court of Arbitration, winning $100 million in damages. The Paris-based ICC Arbitration ruled that Ukraine acted unlawfully when in 2007 it assumed control over shares in the Ukrtatnafta company.

The Ukrtatnafta company was set up under the aegis of Ukraine's major petroleum products manufacturer, the Kremenchug oil refinery (capacity 18.6 million tons).

Originally, it operated as a joint venture with Tatarstan. The controlling stake (55.66 percent) belonged to the Tatarstan side, including Tatneft and its affiliated structures, with the remaining 43.05 percent of shares owned by the Ukrainian State Property Fund and controlled by Naftogaz and 1.1 percent owned by tycoon Ihor Kolomoyskyi's Privat Group.

Tatneft supplied the refinery with high-sulfur crude oil and was looking at modernization options.

However, in 2000-2006 relations between the parties soured. After a series of lawsuits, the Tatarstan shareholders' stake in the refinery was reduced nearly to zero and the company acquired new shareholders with close ties to the Privat Group.

In an interview with Forbes magazine, Tatneft managing director Nail Maganov described what had taken place as "a lawless raid." In 2008, the company filed a suit with the international court of arbitration.

Originally, the lawsuit was for $520 million, but later the figure was increased to $2.4 billion. The international court of arbitration upheld the Russian company's suit only partially, to the tune of $100 million.

According to Vitaly Kryukov, head of the Small Letters analytical project, this amount is far from enough to compensate Tatneft for incurred losses and benefits forgone but it symbolizes significant progress in the legal proceedings, as it has confirmed that the Russian company's claims are justified.

However, Ukrainian Justice Minister Pavlo Petrenko has already announced that Ukraine intends to appeal against the ruling by the end of August. In the opinion of the head of the Moscow-based law firm Nikolayev and Partners, Yuri Nikolayev, if Ukraine refuses to comply with the ruling of the international court of arbitration, Tatneft can seek compensation at the expense of Ukrainian assets abroad, for instance money held in the accounts of Ukrainian state companies.

Based on Interfax, Kommersant and Tatarstan Today reports.