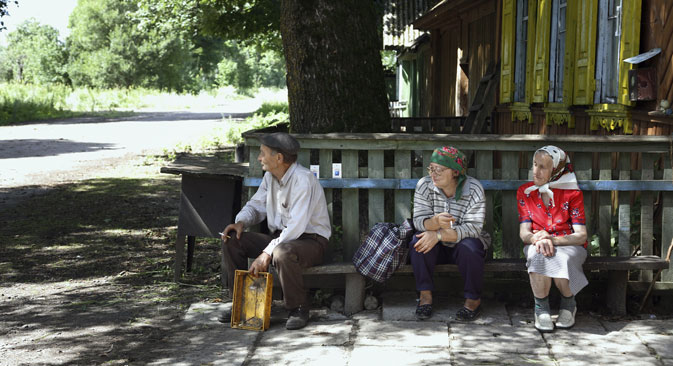 The freezing of transfers into pension funds has been undertaken in other countries in the past. Source: Photoshot / Vostok Photo

For the second year running, Russia has blocked contributions into pension investment funds in order to finance current pension payments. While the move appears to have been made to cover a hole created by the demographic situation in the country, the decision will be costly for Russia’s investment market.

For the second year in a row, the Russian government has decided to freeze the portion of pension contributions allocated for investment.According to the Ministry of Labor and Social Protection, these funds will be used to finance current pension payments.

Contributions for 2013, amounting to some 550 billion rubles ($15.2 billion), have already been frozen, with the government intending to do the same with a further 700 billion rubles' worth of pension savings for 2014.

The move, which the Ministry of Labor and Social Protection says is necessary in order to finance current pension payments, will leave major Russian companies without investment and will force banks to raise interest rates.

The current pension system, which was introduced in Russia in 2003, gives citizens an opportunity to manage part of their pension savings, thereby influencing the size of their future pensions.

Employers contribute 22 percent of a worker's salary to the Pension Fund, 16 percent of which forms the insurance segment of the pension and the payment of the current pensions, while 6 percent goes into an accumulation fund that can be used for investment.

"In 2014, and now also in 2015, the accumulative part is being redirected to the distribution component. This means that all the money collected from employers goes on payments to current retirees," explained a spokesperson for the Ministry of Labor, the initiator of the move.

Sergei Khestanov, an economist for the ALOR Group, explains that the deficit in the Pension Fund has occurred because of the country’s demographic decline. The population is aging, and while 20-30 years ago there were 6 workers to one pensioner, now there are fewer than two, and their contributions do not cover current needs.

The first moratorium on the so-called ‘accumulative part’ of pension contributions was introduced in the second half of 2013. As a result, 550 billion rubles’ worth of contributions never reached non-state pension management funds and Vnesheconombank, an absence that “the banking sector and corporations have already felt” on the market, according to deputy head of the Pallada Asset Management investment company Alexander Baranov.

“The 'cost' of money has risen: Internal refinancing has become more expensive," says Baranov. This has resulted in a devaluation of the ruble and a sharp rise in foreign exchange rates.

The negative effects are already being felt by ordinary Russians: At the end of last year, minimal interest rates for individuals started at 8 percent, whereas in 2014 loans have become 2 percent more expensive, with interest rates starting at 10 percent.

This year's situation will be further exacerbated by the departure of foreign investors, Baranov adds.

Who will miss out on pension investment?

The mechanism for investing pension contributions envisages that the money, via asset management firms, is invested mainly in equity in major Russian companies, government and corporate bonds, or is deposited with major banks.

The segment of pension contributions destined for accumulation funds formerly went to the state development institute - Vnesheconombank (VEB), which acts as the state management company - and non-state pension funds in nearly equal parts.

"Unlike the state management company, an NPF can afford greater risks and therefore get a higher yield," explains Alexander Baranov. Between 2009 and 2013, NPFs' return on pension assets was almost twice as high as that achieved by VEB.

Now the government intends to extend the moratorium on the accumulative segment of pension savings to 2014 contributions too. In other words, the financial market will suffer a total investment shortfall of 650-700 billion rubles, or nearly 1 percent of Russia's GDP.

"This will result in the cost of loans and debt refinancing growing in 2015 for banks and corporations, for the federal and regional finance ministries. It is hard to estimate the exact figure that they will have to pay extra, but it will be comparable with the amount of frozen funds, i.e. the very same 700 billion rubles or maybe even more," Baranov says, predicting the potential consequences.

The freezing of transfers into pension funds has been undertaken in other countries in the past. For example, Hungary opted out of the accumulative system in 2011, while in 2010-2011 there were no payments into the accumulative segment of pensions in Estonia, and in Slovakia the amount of accumulative payments was reduced from 9 to 4 percent. There is also a practice of voluntarily funded programs in which the employer and the employee independently form a pension accumulation fund.

The Ministry of Labor confirmed to RBTH that the decision had taken global experience into account. The ministry also noted that non-government funds had proven themselves not to be a particularly effective instrument: Interest earned on investments was, on average, below the rate of inflation. The accumulative segment is to be made voluntary in the future, says the Ministry of Labor.

Read more: Getting babushka to Skype>>>