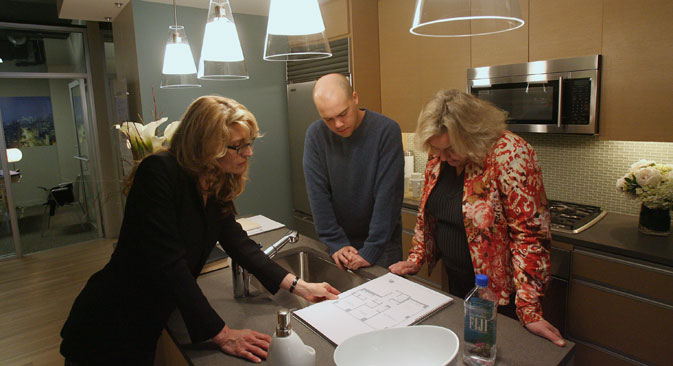 Russians spent over $1 billion on real estate in the U.S. in 2013. Source: Getty Images / Fotobank

Statistics show that Russians are losing interest in U.S. real estate, but those in the market say that their experience shows that the situation is more complex.

In the last six months, demand among Russians for residential real estate in the United States has seen a serious decline, with requests plummeting by nearly 50 percent, according to international real estate company Knight Frank, which has 335 offices worldwide and two in Russia.

“Some buyers have put their demand for American real estate on hold, while others have reduced their budget for a purchase, and still others have changed the country in which they want to buy real estate,” said Lyudmila Aksenenko, director of the international real estate department at Knight Frank Moscow. According to her, Russians spent over $12 billion on real estate abroad in 2013, over $1 billion of which was invested in the U.S.

Data from the National Association of Realtors in the U.S. also show that the interest of Russians in American properties has fallen in recent years. According to their statistics, the share of Russians in real estate transactions with foreign capital fell from 3 percent in 2010 to 2 percent in 2012-2013, then further to 1 percent in the first half of 2014.

The portal Tranio.Ru, which specializes in selling foreign real estate, reported that it received 35.7 percent fewer applications for U.S. real estate from Russian clients in August 2014 than in August 2013.

“According to our data, on the backdrop of deteriorating relations between these two great world powers and the imposition of anti-Russian sanctions, the American real estate market has demonstrated a 43 percent drop in demand from Russians,” said Igor Indriksons, who manages real estate investment for Tranio.ru.

Muscovites turn their garages into homes

His colleague Yulia Kozhevnikova blamed the media for the decrease in interest. “Buyers are being cautious. This mood is connected with the negative information and tensions being pumped out in the media,” Kozhevnikova said. According to her, whereas last year buyers tended to ask questions about price dynamics and the prospects for market development, this year they have primarily been asking about sanctions and possible restrictions on travel to the U.S.

Meanwhile, sellers of U.S. real estate who work directly with Russian clients on the ground say that their experience has been somewhat different. “As of this time, we have not observed any changes in demand for real estate from Russian investors,” said David Cohen, C.E.O. of New York-based Etage Real Estate.

“Deals which were inked previously are closing without issues, buyers are getting financing for their purchases, and those who are now in the market in a serious way have not been deterred,” Cohen said.

According to him, Russians purchasing and investing in the U.S generally have strong bonds with the country and, while the propaganda war and tit-for-tat sanctions have certainly made buyers very concerned, it has not been cause for these individuals to radically change their plans.

Anna Levitova, a managing partner at Evans Real Estate, which has branches in New York and Moscow concurs with Cohen. “We generally aren’t seeing a decline in interest from Russian investors. People who feel threatened by Russia’s current politics are interested in real estate,” Levitova said.

In it for the long term

For the most part, those Russian buyers still interested the American market view it strictly as an investment. According to research by Tranio.Ru, 58.8 percent of realtors believe that Russians buy real estate in the U.S. primarily as an investment.

For comparison, according to real estate investment and development group HAP, foreign investment in U.S. real estate totaled $92.2 billion between March 2013 and March 2014, a 35 percent year-on-year increase. Foreigners accounted for 7 percent of all transactions on the American market.

She did point out one notable shift, however. In the first half of 2014, Russians focused their interest on the lower rung of the premium segment, away from the upper tiers of the market. In New York, the most in-demand apartments are located in Manhattan with a view of Central Park, Aksenenko said. Average prices on the New York market are $22,700-$27,800 per square meter, or even higher for new projects.

In general, there is no reason to believe that a decrease in demand means that Russian buyers are fully withdrawing from the market, said Kozhevnikova of Tranio.ru. “Russians are still engaging in transactions in New York, California, and Florida,” she said.

Read more: How to rent an apartment in Moscow – your personal life hack>>>