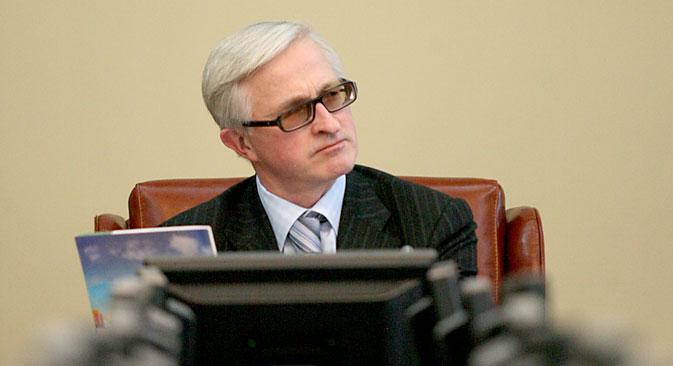 RBTH spoke to Alexander Shokhin, President of the Russian Union of Industrialists and Entrepreneurs (RSPP), former Deputy Prime Minister and one of the authors of Russia's market reforms in the 1990s about whether the Russian economy will be able to guarantee import substitution and restructure itself in the conditions created by the sanctions war between Russia and the West.

Alexander Shokhin speaks to RBTH about the prospects for Russia’s economy. Source: RG

RBTH: Some economists believe that the Russian economy will only gain from the sanctions, precisely due to the development of import substitution. Do you think these hopes are justifiable?

Alexander Shokhin: For many sectors, in particular for the agroindustry, there now exists an additional opening for ‘reconquering’ a part of the domestic market. The RSPP's monthly business indicator shows that in the last few months there has been an increase in demand for production from Russian companies.

At times this is the result of the ruble's devaluation in the beginning of the year, at times the restrictions on imports. But in general the entrepreneurial mood has improved in comparison with previous months, even though it still has not reached a positive level: In August the indicator was 49.6 points, at a neutral evaluation of 50 points.

In addition, import substitution, especially in high-tech production, requires time: It is impossible to find a solution in just a couple of months. However, this does not mean that Russia can wait to modernize its industries and augment their innovativeness and just do it later. Later will be too late.

RBTH: How has political instability, the instability that is also linked to the Ukrainian crisis, reflected on Russian business? Can we say that Russia is perhaps losing its traditional partners?

A.S.: You can't say that business will not suffer from the sanctions. There are two key areas: the attraction of financial resources and new technologies. According to certain calculations, the restriction on accessing long-term financing has already had an effect on the growth of Russian companies' borrowing costs on foreign markets. The potential reduction in the capitalization of Russian companies is calculated at 15-20 percent from the level of July 16, 2014 (the MICEX has fallen to 1250-1180 points). It is difficult to evaluate the restrictions on technology exports, but it is likely that it will have long-term effects on the modernization of the Russian economy.

There are partners who have been forced to halt certain projects, mainly in the investment sector. In particular, in the past two years the state Rusnano Сorporation has been working on an important project: the creation of a direct investment fund with the European Bank for Reconstruction and Development (EBRD). The EBRD's investments were going to be over $100 million. In today's climate these plans most likely will not become a reality, which will have an influence on overall attempts to attract private investments and develop new technologies.

RBTH: Many western companies are afraid that Russia will turn to protectionism and economic isolationism. Do you think that Russia has changed its economic policy priorities?

A.S.: The Russian entrepreneurial community actively interacts with its foreign colleagues; therefore there can be no talk of isolationism. The support of national business is a normal practice for any country, as long as it does not contradict international obligations. It took Russia a long time to join the WTO and it fully observes its obligations. We must use the opportunities that the WTO grants us, we must actively use its instruments as far as trade disputes are concerned, for example, antidumping procedures.

Despite the suspension of Russia’s accession to the Organization of Economic Cooperation and Development (OECD), we are still trying to implement legislation on bringing Russia's legal and regulatory framework into accordance with OECD norms. We think that this implementation is important for Russian businesses and foreign companies operating in Russia, since it creates a common legal and regulatory dimension. Of course we intend to expand collaboration with Asian and Pacific countries, yet this will be done not in lieu of our policy to deepen ties with Europe, but in addition to it.

RBTH: Economic growth has slowed down in the last few years. What is this due to and what is the government doing to break this trend?

A.S.: In many respects the existing restrictions are determined by structural problems in the Russian economy, as well as the lack of a favorable investment climate. The level of unpredictability is very high for making strategic decisions, even where everything depends on government organs and not on external factors. In the last few years the problem of corruption has worried businesses less than before, but it is still one of the top five main impediments to the development of business.

Russia has not been able to fully eliminate administrative barriers. However, some regions have managed to create a more favorable business environment than the country in general. This year four leading Russian business associations, including the RSPP and the Agency for Strategic Initiatives, created the pilot National Rating of Investments for the subjects of the Russian Federation. The winners were the Kaluga, Ulyanovsk and Kostroma regions, the Republic of Tatarstan and the Krasnoyarsk Territory. Twenty-one regions have participated in the rating this year and next year it will cover all of Russia's subjects.

RBTH: Russia is planning on deepening ties with the countries of the Eurasian Customs Union. In your opinion, what does this mean for foreign companies and exporters to Russia?

A.S.: The establishment of the Eurasian Customs Union and the Eurasian Economic Union creates additional opportunities for foreign companies in the form of an expanding market of goods, services, capital and labor that will function according to WTO regulations.

RBTH: In 2013 Russia presided over the G20, and the RSPP, of which you are the president, chaired the B20. Were you able to make contacts with foreign partners?

A.S.: According to the feedback we received from our B20 colleagues, Russia's chairmanship was the most successful in the entire existence of the B20. Without minimizing the achievements of our predecessors, I wish to note that, regarding the number and the activity of participants, our chairmanship was unrivaled. There were more than 140 proposals prepared by the seven target groups; more than half are included in the outcome documents of last year's G-20 summit. We collaborated and continue to collaborate closely with the G20 nations, paying special attention to the Troika partners and the authorized representatives of business circles from Mexico and Australia.

As a result, the package of recommendations, approved during the B20 Summit in Sydney, in many ways is based on the White Paper, which was given to the heads of state representing the G20 countries during the summit in St. Petersburg in 2013. We are now working in order to have our line continued next year, when Turkey will chair the G20.

RBTH: How important does the role of organizations such as RSPP become in times of large import substitution programs introduced by the government? What are RSPP's proposals in this particular case?

A.S.: One of the most serious problems facing business, one that RSPP is trying to solve, is the lack of qualified personnel. A survey that we organized reported that 70 percent of companies encounters a deficit of qualified workers and more than half of companies - a lack of machine operators and equipment. Without a radical change in the personnel factor the implementation of the import substitution program is impossible. And RSPP's most significant proposal is not to increase the fiscal burden on businesses. Achieving this will be the most difficult part. There is discussion about an entire series of initiatives to increase taxes and obligatory insurance payments. However, RSPP hopes to persuade the government to stimulate business, and not to limit its development by extracting more and more resources.