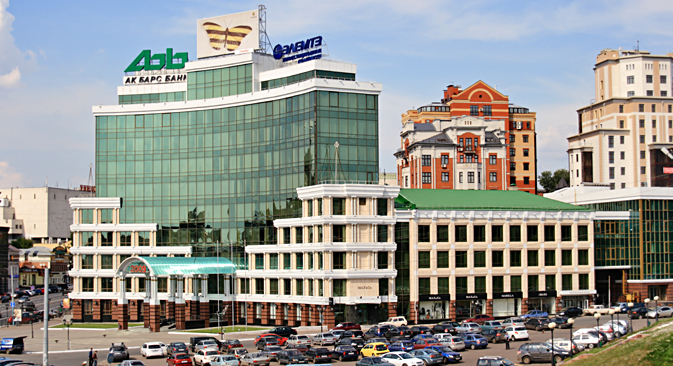 AK BARS, which has its headquarters in Tatarstan and which is Russia's only bank working according to the Islamic model, has published its accounts. Experts say that at a time when a large part of the Russian financial market has been hit by western sectorial sanctions, the attraction of Islamic money can become an alternative to capital from the European markets.

Obtaining funds via Sharia-compliant forms of finance may be even cheaper than using traditional channels, according to accounts published by the Russian AK BARS bank, the first to use Islamic standards.

The accounts indicate that, for the first half of 2014, the $100 million that the bank obtained with its Murabaha financing instrument had an annual cost of 5.37 percent. In comparison, AK BARS currently has two Eurobonds worth $1.1 billion with rates of 8.75 percent and 8 percent.

The bank's press office said that with the reduction of opportunity on the traditional capital markets due to EU and U.S. sanctions, the Islamic financing market offers a lot of potential to Russian banks.

Yudenov believes that, judging by the final calculations of the partial payment of dividends on AK BARS' investment projects, the bank's general efficiency does not differ greatly from the classical scheme: The bank also attracts deposits and gives credit.

Finam Management analyst Anton Soroko thinks that the key difference between Islamic and regular banking is that the former prohibits the charging of interest. Therefore, financing with Islamic capital often resembles investment projects: The credit organization bears the risks along with the borrower, and the profit will vary according to the project's success.

“The bank is directly interested in giving money towards the most efficient and advantageous projects, which is important for the development of the economy on the whole," says Soroko.

In particular, Soroko explains that AK BARS' Murabaha instrument is a commercial agreement in which the seller demonstrates the costs he bore for selling the goods and sells them to another party through a hire purchase with a markup of the original value.

Consequently, the buyer knows the amount of the margin in advance. Besides the Murabaha, Islamic banking has a leasing instrument, the Ijara, as well as the Islamic equivalent of the obligation, the Sukuk.

Getting around legal obstacles

Ernst & Young calculated the global Islamic banking asset market at the end of 2013 to be $1.7 trillion. However, one of the major complications arises when it comes to choosing the object of the Murabaha: Russian banks are banned from trading.

For this reason, banks use various ways around the legislation. For example, the bans do not affect precious metals, which lie at the core of the mechanism used by AK BARS. Moreover, the bank must satisfy a series of criteria in order to receive credit from Islamic investors. In particular, it cannot finance alcohol or gambling businesses, as well as participate in the construction of pig farms.

BARS spent three years satisfying all the conditions necessary for obtaining Islamic funds. In turn, one of Russia's largest state banks, VTB, in 2010 announced its plans to attract funds through the issue of a sukuk. Yet this initiative was never realized.

"Currently, there is a trend in Russia whereby banks are attracting Islamic banking capital, which is built on a completely unusual principle for Europeans," says Soroko.

A matter of principle: Managing finances in Russia, sharia style

In his words, the Russian market on the whole has a lot of potential for these deals. The management must therefore present the opportunities to the investors in a correct manner.

"It is especially appropriate for infrastructure projects, where 'cheap' and 'long-term' money is needed." For this reason, according to Balakirev, "in the future the popularity of this type of financing will only grow."

Russia in the context of Islam currency banks