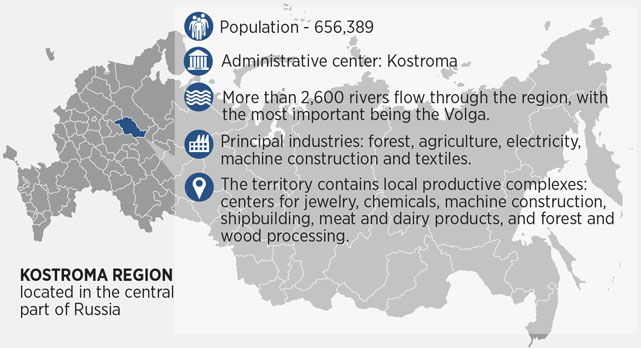 This year, the administration of the Kostroma Region will increase support for small and medium businesses to 68 million rubles ($1.7 million) – triple the amount of support it provided in 2012. Meanwhile, big business is anticipating an active influx of investment from Asia, with China expressing interest in joint projects in the jewelry industry, agriculture, and wood processing. Kostroma Region Governor Sergei Sitnikov gave RBTH the details.

The Kostroma Region currently maintains trade and economic ties with more than 80 countries, including China, Germany, the Netherlands, Ireland, the UK, the United States, Ukraine, Italy, Uzbekistan, the Czech Republic, Turkey, and Azerbaijan.

Fourteen cooperation agreements have been signed with the regions of foreign states; joint projects are currently being implemented in the region with investors from Switzerland, the U.S., Finland, and China.

New investors in the Kostroma Region

Foreign investors are showing interest in the Kostroma Region as a promising territory for investment.

On the one hand, we get positive recommendations from partners who are already implementing their own projects here, whose experience has convinced them that it is effective to work with the Kostroma Region.

The region’s international prestige has also grown significantly since the results of the National Rating were released in May 2014, which placed it among the five best areas in Russia in terms of investment climate.

Of course, the unstable political situation has an influence on decision-making, but the majority of the partners with whom we have already signed agreements are continuing to work with us.

The company Kronostar, which is part of the Swiss concern Krono Holding, is continuing its active investment policy on the basis of its existing wood processing facility. In 2013, approximately $13 million (500 million rubles) were invested in developing the enterprise. The company is also going to expand its production line.

The American company National Oilwell Varco is scheduled to launch a drilling rig factory in the first quarter of 2015. In total, the project is worth 2.7 billion rubles ($70.3 million).

As a whole, the Kostroma Region has achieved balance in working with the West and the East. But we are currently, of course, putting emphasis on actively developing foreign economic ties with countries in the Asia-Pacific bloc, particularly China.

We view China as a promising partner. The Kostroma Region is home to a council for facilitating the work of Chinese investors, and the regional investment portal features a special section in Chinese containing up-to-date information on investment law and free investment areas.

In April of this year, during a working visit to China, I met with the governor of the Shandong province, members of the China Gold Association, and Chinese jewelry companies.

In June, after the visit, there was a presentation on the region at the Chinese Embassy in Moscow, and later a business mission made up of leaders of Chinese companies from Foshan [in the Guangdong province – RBTH] and the Shandong province and a press tour for representatives of China’s leading information publications to the Kostroma Region.

Chinese investors have already started working on organizing modern agricultural enterprises, developing agritourism, and developing logistics. They are also interested in working together on wood processing and construction.

Jewelers from the Shandong province are ready to work with the company Almaz Holding on production and technology for jewelry manufacturing.

These examples prove that investors are highly interested in the region and that we are extremely open to investors. Anyone who comes to the land of Kostroma with mutually beneficial proposals will be given full support and assistance.