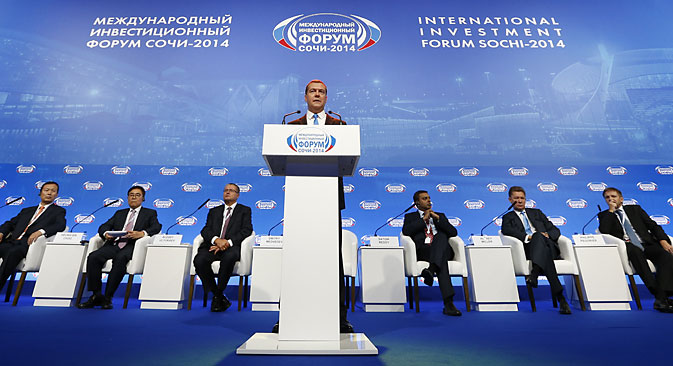 Russia has introduced customs duties on Ukrainian goods, Prime Minister Dmitry Medvedev has announced at the Sochi Investment Forum. However, they will come into effect only if Ukraine officially enacts the trade chapter of the association agreement with the European Union.

Russia has introduced customs duties on Ukrainian goods, however, for the time being they will not be applied, Prime Minister Dmitry Medvedev announced at the Sochi Investment Forum on Sept. 20, 2014.

"We have agreed that the trade and economic section of Ukraine's association agreement with the EU will not be applied until 2016. But we cannot allow EU goods at give-away prices to flood the Russian market," Medvedev said.

Therefore, he explained, import customs duties have been introduced on Ukrainian goods and they will be applied if Ukraine starts enacting the trade chapter of the association agreement. "We are taking these steps in order to protect our manufacturers against unfair competition," the prime minister added.

Earlier, on Sep. 15, Russia, Ukraine and the EU reached a compromise on implementing Ukraine's association agreement with the EU that would make it possible to retain the duty-free trade regime that exists within the CIS till at least the end of 2015.

For that period, additional measures to protect the Russian market and Russian manufacturers will be developed. For its part, the European Union will for the same period extend preferential trade terms, unilaterally reducing import duties on most Ukrainian goods.

"The Russian side has managed to secure an interim success. During the transition period – till at least the end of 2015 – with Ukraine retaining free trade within the CIS and with duty-free import of Ukrainian goods to the EU, European exports coming into the country will continue to be subjected to duties, which will minimize the risk of their re-export to the Customs Union and Russia in particular," explains Maxim Klyagin, an analyst with Finam Management investment company.

At the same time, should the reached agreements be broken, Russia can introduce protective mechanisms by way of protective tariffs on Ukrainian imports.

After in late June 2014, Ukrainian President Petro Poroshenko signed the trade chapter of the association agreement with the EU, Russia proposed raising duties on Ukrainian goods.

The thing is that a key part of the economic part of the association pact is a free trade zone agreement between Ukraine and the EU, which envisages cancellation of import duties.

At the same time, Ukraine is also a member of the CIS free trade zone, which also includes Russia. Therefore, Russia was concerned that its market will become inundated with cheap duty-free European goods.

Ukrainian President Petro Poroshenko already explained that the postponement does not require any amendments to be introduced to the agreement with the EU.

In addition to pushing back the introduction of duty-free trade, Russia also insists on extending the period during which sanitary and customs controls will apply.

According to the Russian Economic Development Ministry, the cancellation of import duties on European goods coming into Ukraine may result in their re-export to the Russian market and a reduction in Russian exports going to Ukraine.

According to the ministry, these changes in trade regulations could affect a third of turnover, including 144 commodity groups, featuring food, petrochemical and engineering products.

In just a year after the agreement comes into effect, Russian producers could lose a total of 100 billion rubles ($2.6 billion), the ministry has calculated. Starting from July, Russia has imposed a ban on importing practically all agricultural products from Ukraine.

According to the Customs Service's statistics, since the start of the year, imports from Ukraine have dropped by a quarter (down to $7.1 billion), whereas Russian exports have, on the contrary, increased by 9.4 percent (to $13.2 billion).