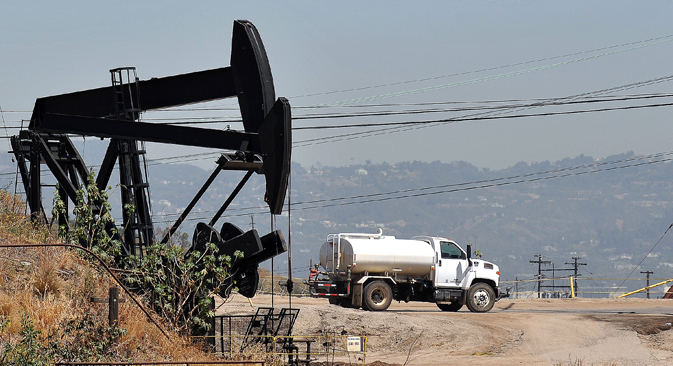 According to the study by Citigroup, in order for the Russian budget to be balanced in 2014, Russia needs a price of $105 a barrel, Iran needs $130, and Saudi Arabia and Qatar $89 and $71, respectively. Source: AFP / East News

The price of Brent oil has tumbled to $92.2 a barrel, placing the Russian federal budget in jeopardy. Russian analysts believe that the decrease in oil prices is related to demonstrations in Hong Kong, the strengthening of the dollar, as well as the drastic growth in oil production in the OPEC countries and the U.S.

The record slump in oil prices is threatening the Russian federal budget: During trading on October 2 the price of Brent oil dropped to $92.2 a barrel, marking the biggest fall since the 2008 crisis, when the price of oil was as cheap as $38.4 a barrel. The price of Brent has fallen by 19.9 percent since June 2014.

"The abundance of oil on the market due to the increase in production in the U.S. and weak consumption in the world are driving prices down in the current year, which is obviously raising concern in Russia," says Ivan Kapitonov, deputy director of the Faculty of Governmental Regulation of the Economy at the Russian Academy of Sciences.

Kapitonov also says that a further decrease in prices is disadvantageous both for America as the biggest oil consumer and for American goods producers, since in this case shale oil projects will no longer be profitable.

Furthermore, in September 2014 the OPEC countries produced a two-year maximum amount of 30.96 million barrels a day.

The decrease in oil prices negatively reflects on the balancing of the Russian federal budget, since its profit percentage is linked to oil prices. According to the Ministry of Finances, the budget will be balanced only if oil prices reach the level of $96 a barrel of Brent.

“It can confidently be said that the average oil price in 2014 will allow the Russian budget to be deficit-free," says Alexei Kozlov, chief analyst at UFS IC.

"Moreover, we do not expect the cost of black gold to decrease this year below the minimal price fixed on September 2,” he said.

However, according to an alternative study by Citigroup, in order for the Russian budget to be balanced in 2014, Russia needs a price of $105, Iran needs $130, and Saudi Arabia and Qatar $89 and $71, respectively.

Kozlov notes that the market is dependent on the agreement between the P5+1 (a group comprised of the five permanent members of the UN Security Council – the U.S., Russia, China, the UK and France – plus Germany) and Teheran on Iran's nuclear program.

"We cannot exclude the factor of oil price manipulation and the artificial increase of supply with the aim of pressuring Russia," he says.

However, in Kapitonov's view, in order to achieve this, Russia's potential enemies would have to make an arrangement with all the OPEC countries – which, fearing a further price decrease, have already begun reducing production volumes.

Currently, as Kapitonov says, OPEC's oil production structures are undergoing important changes, which reveal the discomfort caused by the existing price levels. In particular, Saudi Arabia has reduced production volumes and plans on returning prices to the threshold of $100 a barrel.

"With further decreases, below $90 a barrel, OPEC members may express the need to reduce the quotas within the whole bloc," notes Kapitonov, who adds that the next OPEC session will take place on Nov. 27 in Vienna, but in the case of further negative events in the market, an earlier session can be organized.

According to Anton Soroko, an analyst at investment holding Finam, the strengthening of the U.S. dollar is playing against oil prices. In particular, the U.S. Federal Reserve System is concluding its program of quantitative easing and in 2015 it plans to increase rates, while the European Central Bank has only just announced its quantitative easing program.

"There is a decrease in prices also in gold, silver and other nonferrous metals, which is also related to the growth of the dollar," says Soroko. "The cost of the American currency is at its maximum since 2010."

According to Alexei Kozlov, the demonstrations in Hong Kong, which may negatively affect the growth of the Chinese economy - an economy that is the biggest consumer of oil in Eurasia – are putting heavy pressure on the cost of oil.

Investors, estimating a reduction of oil consumption in the world's second-largest economy, are already factoring their expectations into the prices, remarks Kozlov.