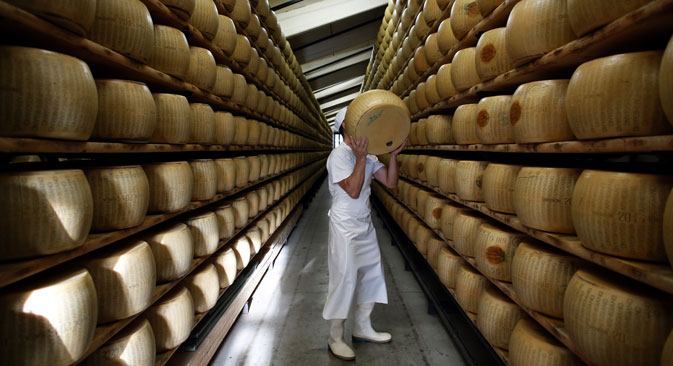 Although Russian leaders hope that sanctions will jump-start domestic industries, economists warn of a lack of accessible credit and fear that the likely result will be recession.

In response to the sanctions imposed by the United States and the European Union on Russia over its actions in Ukraine, for the first time in Russia’s post-Soviet history, the Russian government initiated its own restrictive measures. While the sanctions that Western countries implemented were aimed at limiting exports, Russia’s aim was to restrict imports.

On Aug. 7 the Kremlin introduced a complete ban on beef, pork, poultry, fish and shellfish, milk and dairy products, nuts and fruits and vegetables from Australia, Canada, the E.U., the U.S. and Norway for one year. The list was later amended to allow lactose-free milk, young salmon, trout, seed potatoes, onions, hybrid sweet corn and nutritional supplements.

According to Ruslan Grinberg, the director of the Institute for International Economic and Political Studies at the Russian Academy of Sciences, Russia did not select these items at random.

“In the European Union, agriculture is a subsidized segment of the economy, which usually develops thanks to active support from the government,” said Grinberg. “Thus, the Russian government is trying to influence European politics from within.”

According to this theory, Europe’s supply of food products will increase and cause deflation, therefore damaging the European economy.

The consequences of these retaliatory sanctions, however, have the potential to be much more serious for Russia’s economy.

According to official records, Russia imports about $40 billion worth of agricultural products annually. Approximately 20 percent of all imports and 10 percent of all goods on the market have been affected by the sanctions.

During a session of Russia’s State Council on Sept. 18, President Vladimir Putin suggested that the sanctions could be turned to Russia’s advantage by increasing the competitiveness of the Russian economy, focusing on gross domestic and gross national product, consumption, savings, and capital formation, or the real sector.

“In the next one-and-a-half to two years, it is necessary to take a real leap in the improvement of the real sector’s competitiveness,” said Putin, adding that in the past, such actions would have taken years to do.

According to Putin, the efforts of all federal and regional government departments must be oriented toward developing the real sector. In particular, progess must be made on improving access to credit and creating new competitive conditions for financing business expansion.

Explained Putin: “We need to use one of the country’s most important competitive edges: the capacious domestic market.” It needs to be filled with quality goods made by the real sector, he said, while maintaining the economy’s stability and equilibrium.

Experts reacted to the president’s words with caution, warning that there were many problems that must be overcome before Russian companies could produce, as Putin said, “a sufficient quantity of production that will not be inferior to foreign production in price and quality.”

One problem is having the money to fuel development. “Talk of accessible credit has been around in Russia since the fall of the Soviet Union, but enterprises have still not received it,” says Anton Soroko, an analyst at Finam Investment Holding.

Restrictions on foreign sources of credit as a result of economic sanctions will also not help improve the situation.

Vladimir Osakovsky, chief economist on Russia and the Commonwealth of Independent States at the Bank of America Merrill Lynch is also doubtful about the ability of the Russian economy to show substantial growth in the near future.

“We expect that the macroeconomic situation in Russia will worsen as a result of the accelerating inflation caused by the restrictions on food imports, the fall of consumption and the volume of investment, as well as the reduction of exports,” Osakovsky said in the business publication RBC Daily.

The sanctions that Russia has implemented have already led to an increase in inflation within the country. According to a new forecast by Osakovsky, in the second half of 2014 and the first half of 2015 Russia will sink into a recession, which will be followed by a recovery generated mainly by the base effect.

Alexei Kozlov, chief analyst at the UFS investment company, has a different opinion, however. “The proposal to accelerate the development of the Russian economy that we heard during the State Council session is completely realistic,” he said.

According to Koslov, such high goals are necessary to enact radical changes in the way the Russian economy functions.

“On the whole, Russia has been voicing its aim to reduce its raw material dependence for a long time,” said Kozlov. “In light of the recent events, this goal has been expanded and is now attainable.”

Indeed, despite the sanctions, Russian industrial enterprises are showing positive economic signs. According to data collected in September by the Gaidar Institute of Economic Policy, short-term investment expectations in the industrial sector are still high, on par with those of 2012. In addition, the institute’s “industrial optimism index” came close to the three-year maximum in September 2014.

Between January and July 2014, the production of consumer goods grew by 3.3 percent, passenger cars by  5.7 percent and cargo vehicles by  12.7 percent. Textile and clothing manufacturing increased by 6 percent, and the production of electronic telecommunication components by 17.6 percent.

In the first half of the year, the growth of industrial production was 1.5 percent compared with the same period in 2013, while G.D.P. grew by 0.8 percent. According to a study carried out by the Higher School of Economics, the last time this happened was in 2010-2011. However, it is important to note that today, this growth is entirely the result of orders from the state.

At the moment, according to experts, only a few industrial sectors are experiencing growth. One is the production of vessels, aircraft, spacecraft and other forms of transport. This segment also includes the production of railroad cars, airplanes, helicopters and submarines — a substantial amount of which are purchased by the government and by state companies.

Production in this sector has been growing since the middle of 2013, and in 2014 it increased dramatically. While at the end of 2013, this subsector’s contribution was only 0.1 percent of the growth of industrial production (out of 0.4 percent growth), in the period between January and August 2014, it was already 0.7 percent out of 1.3 percent.

Russia’s metallurgical industry has also experienced growth. The sector has received an additional share of the domestic market because of the ban on supplies from Ukraine. But the demand for increased metallurgical production is also related to construction on the South Stream and Power of Siberia energy pipelines.