Russia is not fencing itself off from the outside world 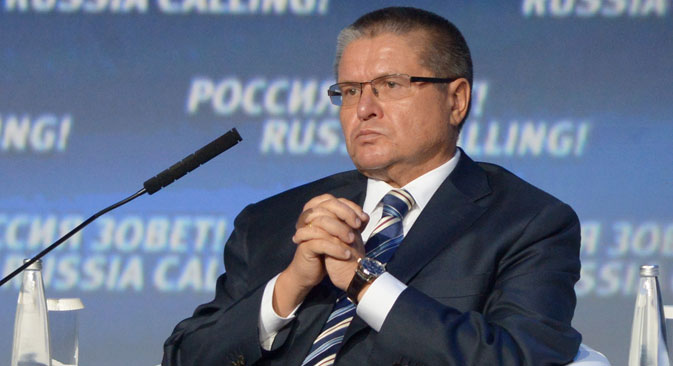 Alexei Ulyukaev: Russia has entered a period of new economic conditions, and the government needs to tighten its belt. Source: RIA Novosti

In an exclusive interview, Russian Minister of Economic Development Alexei Ulyukayev spoke with Viktor Kuzmin of RBTH about how Russia can attract foreign investment in today’s difficult political climate.

RBTH: What changes has the Russian economy recently undergone, particularly as a result of the international sanctions?

Alexei Ulyukaev: We are observing a dual impact of the sanctions on the Russian economy. On the one hand, there is the inevitable decline in growth rates, higher inflation, ruble volatility, and reduced liquidity.

On the other hand, these same new realities are capable of helping overcome the structural imbalances that have long been inherent in the Russian economy.

Purpose of sanctions is unclear for many Russians

The Russian economy possesses a sufficient reserve of durability, which allows it to ensure future growth.

In the World Economic Forum’s Global Competitiveness 2014-2015 report, Russia rose by 11 ranks to 53rd (64th last year) out of 144. The high level of education enjoyed by Russians and its major innovation potential have been identified among its competitive advantages.

RBTH: In that case, how fast will the Russian economy be able to overcome the crisis period?

A. U.: Our economic development forecasts are based on the premise of relative stabilization and a lack of more serious sanctions. Capital outflow may decrease substantially by 2017. The GDP dynamic is expected to rise to 1.2 percent in 2015, versus 0.5 percent in 2014.

Faster GDP growth will primarily be connected with the investment dynamic, which will grow by 2 percent in 2015, versus a 2.4 percent decrease in 2014. We are continuing to work on improving the investment climate so that businesses feel comfortable and safe in all respects. Russia is not fencing itself off from the outside world and is not breaking business ties.

RBTH: How can Russia solve the structural economic problems you mentioned?

A.U.:Russia has entered a period of new economic conditions, and the government needs to tighten its belt. The situation with the budget is compounded by the fact that the country’s revenues will continue to decline relative to previous periods in the long-term, which will prevent Russia from counting on any significant shifts in the government’s economic and budget policy.

At the same time, the present moment seems the best to make the most effective investments in the country’s development. With Russia’s introduction of tit-for-tat sanctions on imports from the United States, Canada, Norway, and the European Union, we have a unique opportunity to develop the most crucial industries, such as agriculture and food processing.

RBTH: In your opinion, which Russian regions might be attractive to foreign investors?

A.U.: The dynamic development of Siberia and the Far East is a national priority, and a decision has been made to introduce profit tax breaks for new investment projects being implemented in this region.

The next step will be to spread them throughout the entirety of Eastern Siberia, including the Krasnoyarsk Territory and the Republic of Khakassia. Besides that, right now the possibility of creating so-called “priority development territories” in the Far East and Eastern Siberia is being considered, with special conditions for launching non-extractive production facilities oriented towards exports.

Five-year holidays are being provided on the profit tax, mineral extraction tax (with the exception of oil and gas), and the land and property taxes, and discounted insurance premiums are being given, to new companies located in the priority development territories.

We plan to create positive business conditions on these territories that can compete with the key business centers in the Asia-Pacific region, including procedures for securing construction permits, connecting to power grids, and going through customs.

RBTH: In your opinion, in what way is Russia currently attractive to foreign investors?

A.U.: In the UNCTAD [United Nations Committee on Trade and Development] World Investment Report 2014, Russia is named as one of the most attractive economies in transition for foreign investors. Our advantages lie in the high return on energy projects, as well as projects associated with natural resources. Not only oil and gas, but also metals and timber attract foreign investors.

Unfortunately, we are still seeing only individual examples of enterprises being created that produce high value-added products. In my opinion, there is major potential in that field for cooperation with South Korean companies.

Russia is objectively interested not only in attracting financial capital, but also in new technology, know-how, and best management practices that would allow it to bring entrepreneurial activity to a new level of efficiency.

In order to reduce the country’s dependence on commodity exports and high-tech imports, and to increase the share of high value-added products, Russia needs to attract investment into modernizing industry, the service sphere, and agriculture.

RBTH: Several major foreign corporations, such as Volkswagen, Siemens, and Samsung, have already entered Russia. Is Russia planning to raise the level of localization of their production?

A.U.: This applies to all foreign industrial enterprises with assembly operations in Russia. Industrial clusters and parks are an effective tool to raise the level of production localization. Many Russian regions have created or are creating such production agglomerates.

The auto industry is definitely the leader. The Kaluga, Kaliningrad and Leningrad regions already have full-fledged auto assembly clusters for the leading global companies. The next logical step is to deploy enterprises that produce components in the regions.