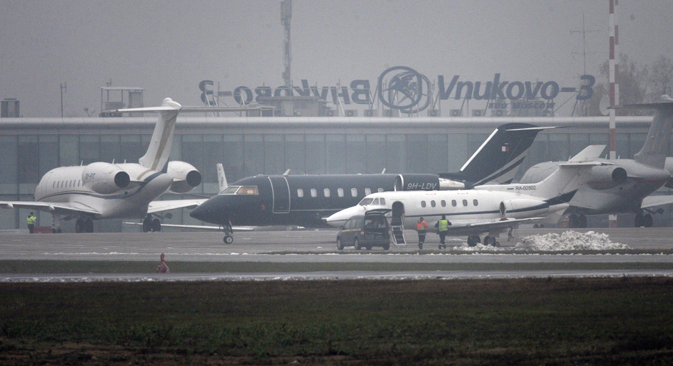 Christophe de Margerie, CEO of French oil and gas company Total, was killed in a plane crash at Vnukovo Airport in Moscow on Oct. 20. RBTH reports on the tragedy and asks how the loss of its head will affect the French giant's joint projects with Russian companies.

The chief executive of French oil and gas company Total, Christophe de Margerie, was killed in a plane crash at Moscow’s Vnukovo Airport on Monday, October 20.

According to the Russian Emergency Situations Ministry, the tragedy occurred shortly before midnight Moscow time when the corporate jet carrying Margerie collided with a snowplow on the runway as it was taking off. Early indications are that the driver of the snowplow was drunk.

“There was a collision with the airfield service's snowplow at 11:58 pm during takeoff. As a result of the collision, the aircraft was engulfed in flames, and the passenger and all crew members were killed. The driver of the snowplow was not injured,” Vnukovo's press service told RBTH.

Total boss Christophe de Margerie was in Moscow for an annual meeting of the Consultative Council on Foreign Investment, which was presided over by Russian Prime Minister Dmitry Medvedev. The French CEO was well known for his opposition to the Western sanctions against Russia.

The consequences for Russian companies

Total's shares fell from 43 euros to 42 euros immediately after the crash. Given the scale of Total's joint projects with Russian companies, all of the largest oil and gas projects in Russian territory could now be in jeopardy. However, Russian analysts and industry experts are convinced that the French company will not abandon its biggest projects.

At the moment, Total is participating in five large projects in Russia: the development of the Kharyaga field in the Nenets Autonomous Area, the Shtokman gas condensate field on the shelf of the Barents Sea, the Termokarstovoye field in the Yamal-Nenets Autonomous Area, the Khvalynskoye offshore field in the Caspian Sea, and preparations for the Yamal LNG project, which entails developing the South Tambey gas condensate field and producing liquefied natural gas.

“Total has significantly strengthened its position on the Russian market in the last two years. The company joined the Yamal LNG project, and Total is also involved in a joint project with Lukoil and Gazpromneft,” Deputy Chief of the National Energy Institute Alexander Frolov said in an interview with radio station Kommersant FM.

Total is a French oil and gas company that is the world's fourth-largest producer after Royal Dutch Shell, BP, and ExxonMobil. In 2013, the corporation produced 207,000 barrels of oil equivalent a day. Total has had operations in Russia for over 20 years.

According to Anna Kokoreva, an analyst at broker Alpari, Total was intending to intensify its integration into the Russian oil and gas industry in the next few years. The French corporation was planning to help develop Russia's Bazhenov Suite, the first shale oil production project in Total's history.

Of course, de Margerie's death does not mean that cooperation with Russia will abruptly cease. Everything will depend on the company's new CEO, Kokoreva said. “But it is certainly dramatic to lose one of our country's colleagues in such difficult times,” she added.

Investcafe analyst Grigory Birg agreed with Kokoreva. “Russia is of priority strategic importance for Total itself. In 2011, the company became a strategic partner for Russia's Novatek on the Yamal LNG project, which among other things involves constructing a liquefied natural gas plant,” he said. The news of de Margerie's death is unlikely to have any influence on the project because the companies have already signed the main agreements, he added.

Snow machine operator with which Falcon collided not drinker, has heart problem - lawyer

“So far, it has already been established that the snowplow driver was in a state of alcoholic intoxication. A decision could possibly be made to relieve several of the airport's employees of their duties while the criminal investigation is being pursued,” the Investigative Committee said. However, the suspect's lawyer Alexander Karabanov denied that his client was in a state of intoxication.

A special commission has been created under the leadership of the Interstate Aviation Committee to investigate the crash. French specialists will join the investigation in the near future.

A criminal case has been filed under Chapter 3, Article 263 of the Russian Criminal Code, which entails the violation of traffic safety rules and aviation machinery operation rules resulting in the death of two or more persons.

The investigation is not considering the version of events alleging a contract killing.

Director of the Moscow Air Traffic Junction Dispatch Center Anatoly Kulik told RBTH that the dispatchers who oversaw the aircraft's takeoff could shed light on the event. They are currently being questioned by investigators.

Christophe de Margerie Christophe de Margerie was born in Paris on August 6, 1951. He graduated from the ESCP Europe business school in 1974, and that same year he was employed in Total's finance division, where he was responsible for the budget and later for exploration and production project financing. He took over as CEO in 2007. De Margerie was Knight of the Legion of Honor and Officer of the National Order of Merit.