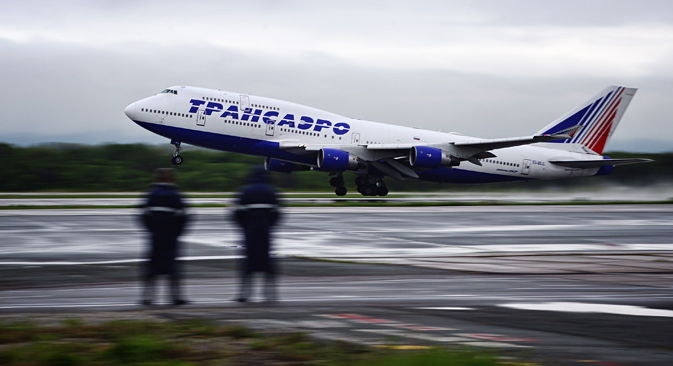 Two of Russia’s biggest airlines have requested aid from the government to cope with falling revenues and the credit crunch.

Transaero and Utair, the second and third players on the Russian market respectively, have appealed to the government for support in the wake of the Western sanctions and the credit crunch. Transportation Minister Maxim Sokolov told Russian news agency TASS that the airlines have had difficulties obtaining credit and were not able to restructure their debt. The increase in borrowing costs against the backdrop of Russian airlines' heavy debt burden has also lead to an increase in expenses related to debt servicing.

According to Dmitry Baranov, a leading analyst with Finam Management, the ruble’s decline really started causing problems in the past few months. "The companies' debt burden was rather tolerable and while the ruble did not decrease, the airlines easily paid off their debts," Baranov said. "But as soon as the ruble began to fall, the companies began having problems, since they receive their revenues in rubles but must make their payments, especially for the supplied aircraft, in foreign currencies." Since the beginning of 2014, the Russian currency has lost 25 percent of its value, which led in turn to a drastic increase in payments to foreign partners.

According to Anna Milostnova, an analyst with UFS IC, it was clear already in the first quarter of 2014, when the ruble fell by 10 percent against the euro, that the currency fluctuation would influence airlines with international flights. "Aeroflot reacted by lowering the prices quoted in euros on international flights from Russia," Milostnova said, but nevertheless, Aeroflot passenger numbers in the first eight months of 2014 declined by 0.8 percent. Moreover, the weakening of the ruble and the reduction of tourist flows led to the bankruptcy of an entire series of Russian tour operators, which also hurt the airlines financially.

Oleg Panteleev, director of the online industry portal Aviaport said that the situation was serious. "The current situation in the airline market can be called critical in the segment of aviation works and pre-critical in the segment of passenger transportation," Panteleev said. He believes that several factors are simultaneously influencing the market: one is the deceleration in economic growth, which has lead to a decrease in passenger traffic. “A cheap ruble reduces the opportunities for vacationing abroad for many Russian tourists, which has led to a reduction in international flights," Panteleev said. This reduction in expendable income will also lead to a need to lower prices to lure in passengers.

Panteleev believes that Russian airlines have become hostages to the market's rapid growth in recent years. "It wasn't enough for the airlines to radically restructure their business by buying modern airplanes to comply with the constant growth in passengers," Panteleev said. "The airlines couldn't develop on their own money. They should have attracted credit." If they had, according to Panteleev, the unusual growth in passenger transportation would have been accompanied by rapid growth of credit borrowing. Under the present model, however, when growth began to decline and costs grew more quickly than revenues – and when borrowing became noticeably more expensive –the industry's financial problems were inevitable.

However, Finam Management’s Baranov thinks that Russian airlines can depend on government support. "The government has said on many occasions that Russia vitally needs to develop air transportation, including regional flights, and that the departure of one of the keys players would deal a heavy blow to air transportation in general, casting the aviation industry several years back," Baranov said. Furthermore, the bankruptcy of an airline would lead to unemployment in many regions and the reduction of revenues to the state budget, so the state is likely to take action to avoid such a scenario.

According to Sokolov, the government has formed a special committee to assess the Transaero and Utair requests and it must develop a response with in a month.