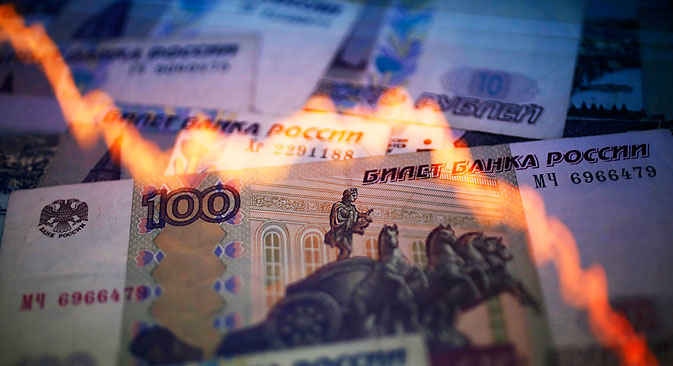 The Russian Central Bank has abandoned its defense of the ruble and declared that it will make no further interventions to prop up the weakening currency. The regulator’s decision resulted in a rapid slide by the ruble on Nov. 5-7. However, analysts believe that ultimately the decision will make the Russian financial system more stable and will turn the ruble into a freely convertible currency.

The Russian Central Bank has switched to a floating exchange rate policy for the national currency, the ruble. Under the new strategy, the Bank of Russia will no longer carry out full-scale currency interventions, i.e. sell dollars on the Russian market.

The regulator has set a cap for its daily dollar sales at $350 million, which, according to analysts, cannot influence the exchange rates.

Previously, the Central Bank would carry out interventions until the ruble rate stabilized. For example, in October 2014, it spent some $29.3 billion to support the national currency, while for nine days since late October it was selling over $2 billion a day.

The press service of the Russian Central Bank explained that the decision to stop unlimited currency interventions will prevent speculation against the ruble. However, the decision to stop propping up the rubleresulted in drastic fluctuations in the ruble exchange rate: During trading on Nov. 8 it first dropped nearly 10 percent against the dollar, but then went up and practically regained its position.

“The Central Bank’s decision forms part of the strategy of switching to inflation targeting, with a floating rate of the national currency being part of it,” says head of research at IK Russ-Invest Dmitry Bedenkov.

At the same time, he adds, the Central Bank has reserved the right to carry out interventions above the $350-million cap should it feel there is a threat to stability. The introduction of daily limits on interventions at the boundaries of the currency corridors is intended to reduce pressure on the gold and foreign exchange reserves, Bedenkov explains.

The Central Bank attributed the drop in the ruble rate that followed to fundamental factors: the fall in oil prices and restricted access to external capital markets.

According to the regulator, it will take the currency market a while to adapt to the new exchange rate policy mechanism, during which time the ruble may fluctuate in either direction.

“The first outcomes of the ‘new strategy’ are simple: The ruble is hitting new lows as the Central Bank’s interventions in recent weeks considerably restrained the drive to sell,” says Anton Soroko, an analyst with the Finam investment holding company.

However, he adds, thus the ruble is gradually covering the path towards becoming a freely convertible currency, which means it will be possible to exchange it into any other currency, bypassing reserve ones.

“For example, now in order to exchange rubles into Swiss francs or Mexican pesos, it is necessary to first convert them into U.S. dollars at the Central Bank rate and only then can the dollars be exchanged into pesos,” Soroko explains. This results in an additional transaction, which increases the costs of the economic agent and makes the key reserve currency all the more influential, he adds.

According to Soroko, in the long term, the switch to a floating exchange rate is good news for the economy, however, short-term expectations are not especially optimistic.

What’s behind the plummeting ruble?

“Firstly, free conversion means that the Central Bank will stop having an influence on the Russian national currency pricing, which in the end will increase volatility,” he explains.

Making short-term currency risk forecasts will become considerably more difficult, which will have a negative effect for companies heavily involved with foreign partners. For ordinary people, it will entail risks associated with a falling ruble, which will affect purchasing power, as some goods are bought with foreign currency, says Soroko.

Having said that, the Central Bank has made it clear that in the event of a drastic and protracted fall by the ruble, it may revert to selling dollars on the market.