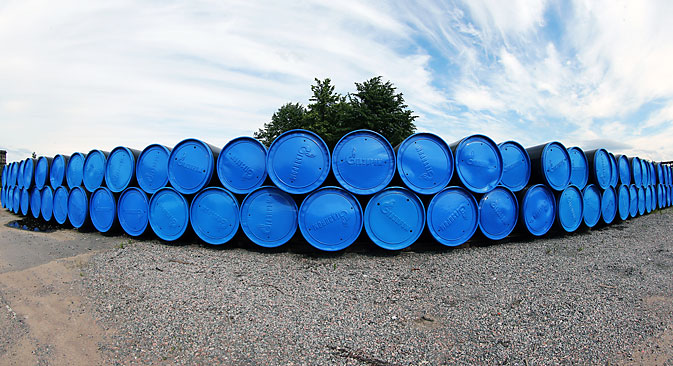 Gazprom and the China National Petroleum Corporation have signed an agreement for Russia to supply China with natural gas for 30 years via the new Altai pipeline. The route could be used to supply up to 100 billion cubic meters of gas annually, though there are questions about the financial viability of such a long pipeline for Russia.

Gazprom's CEO Alexei Miller and Chairman of the China National Petroleum Corporation (CNPC) Zhou Jiping have signed a framework agreement on the supply of natural gas from Russia to China via a "western" route.

The document, signed by the two parties at the APEC summit in Beijing on Nov 8-10, envisages an annual supply of 30 billion cubic meters of Russian gas from Western Siberian deposits to China through the Altai gas pipeline for a period of 30 years. According to Gazprom CEO Alexei Miller, the supply contract using the western route will be signed by the end of 2015.

The Power of Siberia

The 30-year agreement to supply up to 38 billion cubic meters of gas annually through the Power of Siberia gas pipeline from the Chayanda and Kovyktinsky deposits was signed by Gazprom and the CNPC in May. The total value of the contract is $400 billion, with investments in the project estimated to be $55 billion. Construction of the pipeline began on Sept. 1 and exportation is scheduled to commence between 2018 and 2020.

In particular, the document touches upon conditions such as the volume and terms of delivery, the level of "take and pay" (the buyer's obligation to pay a certain penalty in the event that consumption volumes are less than specified in the contract) and the location of the  transfer point for the gas on the border.

In the future, the sides will have to sign a sales contract and an intergovernmental agreement. The contract value, and consequently the gas price, have not been determined. "It is clear that the price will be lower than that of the deliveries made through the eastern route [the Power of Siberia gas pipeline, whose price per cubic meter is not known, though is estimated at $350 – RBTH], since the investments in infrastructure (transportation and extraction) are significantly less," says Grigory Birg from Investcafe.

According to Platon Maguta, general director at the Maguta Fund, the economically rational gas price for China is currently about $380-400 per 1,000 cubic meters. This is influenced by the fact that the supplies will mostly come from the deposits in the extreme north of Russia (Yamal, Yakutia, etc.)

Lately Gazprom has been accelerating the pace of collaboration with its Chinese partners. The construction of the Power of Siberia, the world's biggest pipeline, which will deliver gas through the eastern route, is being carried out at full speed.

"Negotiations on the western route through Altai have been going on since 2010, but then emphasis was given to the ‘eastern’ route, since the main consumers are located in eastern China and the demand is greater there," explained the press office of the Russian Energy Ministry.

The press office also remarked that China's use of gas is constantly increasing: In 2015 China will use from 470 to 930 billion cubic meters. There is also the possibility of supplying up to 100 billion cubic meters of gas annually through the western route. According to Alexei Miller, the western route may be launched even sooner than the eastern one, due to the available pipelines and infrastructure.

"The western corridor is united by a single gas transportation system and by the main deposits in Western Siberia, that is, the resource base already exists," confirmed the Energy Ministry.

Western Siberia's deposits are also the resource base that is used for supplies to Europe.

At the same time, Gazprom still has to modernize the existing gas transportation infrastructure and construct a gas pipeline to the Chinese border, which will pass through rather complicated terrain. Investments in the Altai gas pipeline are estimated at $11-14 billion.

Some experts believe that Russia may freeze the expensive projects concerning the construction of gas pipelines and gas liquefaction that are oriented towards western consumers, since there may not be enough resources to simultaneously realize several large projects. The troubled South Stream project to transport Russian natural gas to Europe via the Black Sea be one of the first.

However, according to the Energy Ministry, for the time being “there is no probability of rejecting the South Stream project. Russia, despite the establishment of trade and economic relations with the Asian-Pacific countries, will remain a reliable supplier of gas to Europe."

However, there are those who think that the sudden acceleration in gas cooperation between Russia and China is conditioned by political, rather than economic factors.

"By all appearances, Russia is actively working with China, and Asia in general, precisely in the context of the western sanctions and the creation of alternative distribution channels for its energy resources," says Anna Bodrova, Senior Analyst at the Alpari Group. "Logically speaking, all these negotiations should have been completed a couple of years ago, so that now it would already be possible to start intelligence work and construction."

Mikhail Krutikhin, Partner at Rusenergy, says that both projects supplying gas to China may turn out to be economically and politically disadvantageous for Russia. Firstly, he says, the western route pipeline will take 5,000 miles to reach China's economically developed regions. For Western Siberian gas to be competitive in terms of transportation costs, the length of the route must not exceed 3,100 miles.

Therefore, it may happen that China will receive the gas at a price that is advantageous only for Beijing. Moreover, it is important to note that the gas market is developing also in Europe, to which Russia supplied 138 billion cubic meters of gas in 2013. The expected volumes of supplies through the eastern and western routes to China are almost twice as less: an annual 68 billion cubic meters until 2020.