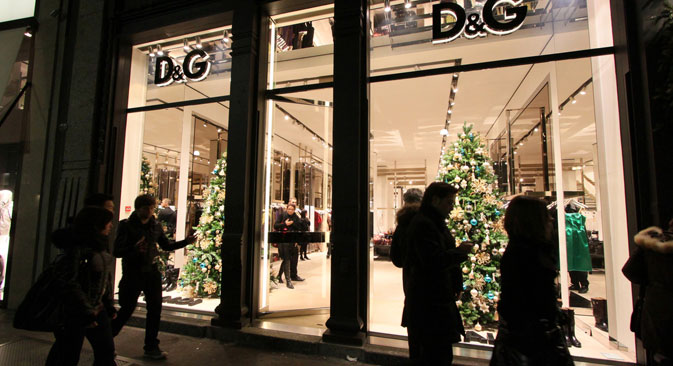 Foreign clothing brands have been invited to localize their production in Russia, with new factories being offered long-term tax breaks until 2025. Furthermore, the Industry and Trade Ministry guarantees manufacturers who accept the invitation a share of the market from the state procurement order.

The Russian authorities have invited foreign clothing brands to localize their production in Russia, Deputy Industry and Trade Minister Viktor Yevtukhov has said in an interview with the Rossiyskaya Gazeta newspaper.

Yevtukhov explained that state support programs currently envisage subsidies for partially recovering the costs of materials, technical upgrades and new investment projects. New factories can also enjoy long-term tax breaks until 2025. Furthermore, the ministry guarantees manufacturers who accept this invitation a share of the market from the state procurement order.

“Since in the Soviet era Russia had a well-established textile industry, our country can occupy a certain niche between the expensive European segment and the so-called cheap Asian-made consumer goods,” said Yevtukhov.

One of the ways of achieving this goal, he explained, is to establish foreign manufacturers’ production facilities in Russia, as is the case with the automotive industry. “This is, of course, a task for the future,” he said. “Having said that, our textile factories already have a good basis to build on.”

In particular, during meetings with the China National Textile and Apparel Council and some leading companies at the Super exhibition in Milan, it turned out that Chinese manufacturers view Russia not only as a distribution market for their goods but are also ready to invest in production in the country. At Southeast Asia’s biggest fashion event, the Mercedes-Benz China Fashion Week in Beijing, a three-year strategic cooperation was signed between the Russian Chamber of Fashion and the China Fashion Association.

The drive to localize production in Russia may bring down prices for clothes made in Russia. “Consumer goods production requires a considerable safety margin in terms of prices. If in terms of quality there are no issues, in terms of costs, we are still running behind [our] Asian competitors,” Yevtukhov said.

He went on to add that in the mass segment it is important to establish relations with large retail chains and to develop sources of raw materials. As for external markets, there are more prospects there for high-tech Russian goods, such as technical textiles and nonwoven fabrics. At the moment, this market accounts for about 30 percent of the industry’s sales. Furthermore, over the last five years the production of nonwoven fabrics in Russia has increased eightfold, while on the EU market, especially in Germany, technical textiles account for 50 percent of the industry’s growth.

Consumer goods manufacturing in Russia continues to grow despite the economic slowdown. According to the Russian Industry Ministry, in 2013 industrial output in the country grew by almost 5 percent. Furthermore, even in the first nine months of 2014, clothing production in Russia grew by 7 percent, whereas overall economic growth in the same period was just 0.7 percent.

At the same time, following Russia’s accession to the WTO and the subsequent cancelation of duties, the production of leather and leather goods dropped by 10.5 and 20 percent respectively.

To address this problem, in August 2014 the Russian government banned the export of semi-finished leather. In addition, the ministry is seeking a similar ban on the export of raw hides. “We are not alone here. For example, Belarus has already introduced such a ban. Arguments in favor of the move include a shortage of raw hides, a high demand for them from Russian manufacturers, and shadow exports,” Yevtukhov explained.

According to him, problems with the domestic production of fabrics are rooted in the loss of a considerable part of the raw materials base following the breakup of the Soviet Union: 100 percent of the production of cotton fiber and natural silk remained in former Soviet republics.

Despite the fact that at the moment most types of synthetic fibers are imported, considerable progress has been made toward establishing domestic production, said Yevtukhov. For instance, there is a large-scale project to produce synthetic fabrics in the town of Shakhty in the Rostov Region. However, he conceded, there is less activity when it comes to establishing new production of fashionable fabrics.

“Since Russia is a leading oil and gas producing nation, we have a good chance of successfully developing the production of synthetic fibers and yarns in Russia, including through developing a production chain at the high end of the petrochemical industry,” Yevtukhov said.