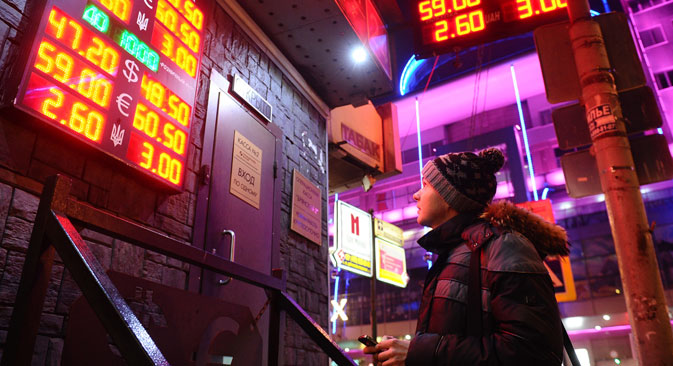 How much money is Moscow currently losing because of economic restrictions? Source: Alexander Ryumin/TASS

Russia’s overall losses due to Western sanctions over Ukraine amount to $40 billion, Russian Finance Minister Anton Siluanov has said. A further $90-100 billion will be lost because of the 30-percent drop in oil prices. According to Russian experts, rising inflation and a falling ruble could be considered to be indirect consequences of the sanctions too.

Overall losses caused to Russia by the sanctions imposed on it by the West over its role in the Ukrainian crisis currently amount to $40 billion, Russian Finance Minister Anton Siluanov said at a forum in Moscow, the Russian business daily Kommersant reports.

Siluanov explained that Russia is losing a further $90-100 billion a year because of the 30-percent drop in oil prices. At the same time, analysts from the influential Institute of Development at Moscow’s Higher School of Economics, having compared two versions of the Central Bank’s latest basic forecast, arrived at different data.

One of those versions envisaged that Western sanctions will be removed in the third quarter of 2015; the other, that they will remain in force up until 2017. The difference in capital flight forecast between these two versions was some $170 billion over a period of three years, i.e. $57 billion a year.

The first sanctions were imposed by the U.S. and EU against Russia in March 2014 after its annexation of Crimea, and mainly targeted Russian politicians. The measures were expanded in April to include more individuals and a number of Russian companies. In July, in response to the escalating conflict in the Donbass region of eastern Ukraine, the West introduced wide-ranging sectoral sanctions, along with restrictions on certain banks and energy firms and a further extension to the list of individuals.

“It is difficult to calculate losses to the economy caused by the sanctions,” says Konstantin Korishchenko, head of the stock market and financial engineering department at the Russian Presidential Academy of National Economy and Public Administration.

“But one can assume that they will be equal to the difference between capital flight in 2014 and 2013. In that case the figure of $40 billion will turn out to be a very optimistic assessment, since capital flight from Russia this year is expected to exceed $120 billion, compared with $67 billion last year,” says Korishchenko, who adds that it is difficult to separate the effect of sanctions from the effect of the switch to a floating ruble rate.

Dmitry Bedenkov, head of research at the Russ-Invest investment company, agrees. “It is practically impossible to calculate the exact amount because it is difficult to give a numerical estimate to the indirect losses caused by delay to or freezing of joint projects, which is not directly linked to sanctions,” he says.

Experts see the drop in oil prices as indirect losses. For example, the Russian budget has been drawn up on the basis of the forecasted price of about $100 per barrel of Brent. As oil prices have dropped to below $80 per barrel, the Finance Ministry is already proposing to cut budget spending.

“When planning the budget for future budget cycles, we should proceed from the oil price forecast that we shall expect. It is likely to be about $80 per barrel,” said Anton Siluanov.

The Finance Ministry predicts that next year, if the ruble rate and oil price situation remains the same, budget revenues will decrease by up to 500 billion rubles ($10.7 billion). The ministry estimates that a similar shortfall may be caused by the risk of an economic slowdown and a reduction in imports.

“Losses caused by sanctions are made up of many elements, but their main result has been a decline in investors’ interest in Russia and an increase in the risks associated with investment in Russian projects,” says chief analyst with UFS IC Alexei Kozlov.

In these circumstances, he continues, Russia has to take active measures to stabilize the ruble, contain inflation within reasonable limits and to implement an import substitution program.

According to Investcafe analyst Timur Nigmatullin, “the need to refinance the debts of some state companies affected by the sanctions and to replace foreign investors’ funds, which cannot now be attracted for certain projects, is resulting in a reduction in sovereign funds.”

Major oil and gas companies Rosneft and Novatek have already asked to be allocated funds from the main repository of Russia’s oil and gas revenues, the National Wealth Fund.

Against this background, Russian companies’ revenues have plummeted. According to the Russian Federal Statistics Service (Rosstat), in September 2014 companies’ income before tax, which accounts for nearly half of all capital investment in Russia, dropped by 83 percent.

As a result, in the third quarter, annual profits fell by 44 percent after a 50-percent growth in the second quarter of 2014 and a drop of 18 percent in the first.

The Economic Ministry explains that if in the second quarter of 2014 exporters’ ruble revenues, in addition to the depreciation of the national currency in the first quarter, were propped up by relatively high commodity prices, then starting from July, they (especially oil prices) dropped. As a result, companies are not prepared to investment in developing production.

According to a poll of entrepreneurs conducted by Rosstat, in November 2014 “economic uncertainty” for the first time was listed among the top three factors restricting investment growth. It was named by nearly 40 percent of polled companies, while another 40 percent named “too high taxes” and 54 percent cited “insufficient domestic demand.”