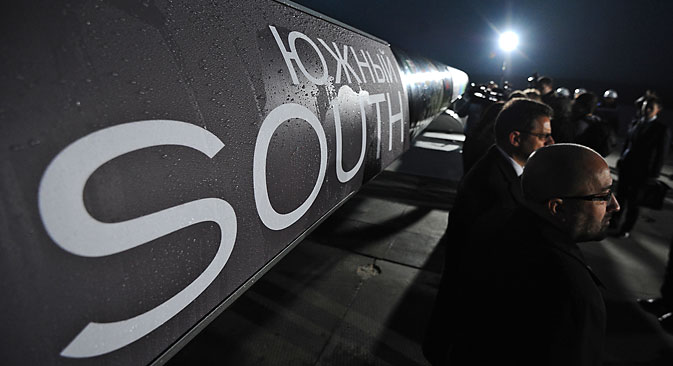 Why has Moscow dropped the project, and who will the decision affect? Source: Ramil Sitdikov/RIA Novosti

Russian President Vladimir Putin has announced that Russia is calling off the South Stream project to construct a gas pipeline to Europe via the Black Sea. According to Russian experts, the recent dramatic increase in the project’s cost could have had a hand in the Kremlin’s decision to abandon it. But who stands to profit and who stands to lose from the decision?

Russia has abandoned its project to build the controversial South Stream gas pipeline linking Russia and Central Europe via the Black Sea, citing Bulgaria’s refusal to allow construction on its territory as a key factor.

Russian President Vladimir Putin announced the decision during a one-day visit to Turkey on Dec. 1, the Kommersant daily reports.

He added that Russian energy resources will be redirected to other markets by promoting and accelerating the implementation of liquefied natural gas projects.

According to Putin’s estimates, Bulgaria will miss out on at least 400 million euros ($500 million) a year in transit fees because of the decision to scrap the project. However, Russian gas giant Gazprom will suffer even more – the company has invested $4.66 billion in the project in the last three years.

Why South Stream was called off

The project operator South Stream Transport estimates that European companies will lose at least 2.5 billion euros because of the abandoned project. Japanese companies who were participating in the project will lose some 320 million euros (a Japanese consortium made up of Marubeni-Itochu and Sumitomo had received a pipe supply order worth that amount.)

“The suspension of the project comes as no surprise given the fact that Bulgaria has long been talking about a ban on laying pipes through its territory. We were completely unable to get our Bulgarian partners to budge,” said Ivan Kapitonov, an associate professor at the Russian Presidential Academy of the National Economy and Public Administration.

In August 2014, the Bulgarian Ministry of Economy and Energy suspended the implementation of the project because it violated the European Union’s Third Energy Package. According to those rules, owners of gas pipelines in the EU cannot simultaneously be gas producers.

After Putin announced the decision to freeze South Stream, Gazprom shares jumped by 1.1 percent. “Investors have a positive view of the decision the concern made yesterday to not continue the South Stream project,” Director of the Analytics Department at Alfa-Forex Andrei Dirgin said.

Later, Gazprom chief Alexei Miller said that the gas giant will channel the gas pipeline away from Bulgaria to Turkey. According to him, the pipeline will carry 63 billion cubic meters of gas a year, 14 billion of which are intended for Turkey itself, and the rest of which will go to the Turkish-Greek border, with the EU as the final destination.

“In this case, Russia will get the same planned effect [as from the South Stream pipeline]: diversified supplies and a way around unreliable transit countries,” said Ivan Kapitonov. He added that European countries may be surprised by the choice of a route through Turkey, since the EU did not anticipate any trade-offs in the project, especially if they involved laying pipes through a country with non-bloc status. As it stands, Russia is depending on Turkey as a transit country, but that is a necessary compromise, Kapitonov said.

Dmitry Baranov, a leading expert at investment holding company Finam Management, said South Stream could be revived in its original form if the EU were to alter its position. “Russia will strictly adhere to the existing contracts for gas supplies to the EU,” said Baranov. In his opinion, Russia is not abandoning its pursuit of diversified gas supplies and is willing to deliver fuel to virtually any nation, since it has sufficient reserves to do so.

“The eastern and western gas supply routes will be retained, and in light of the fact that India is interested in Russian gas, a southern route may also materialize in the coming years,” Baranov said.

According to European Commissioner for Energy Union Maroš Šefčovič, the EU has still not canceled a meeting among the South Stream participants scheduled for Dec. 9, despite Russia’s announcement that it is dropping the project.