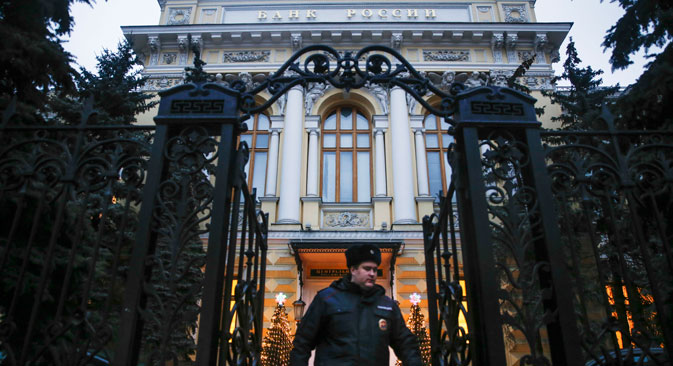 The Russian ruble’s fall against the U.S. dollar and the euro accelerated drastically on Dec. 15-16, with the currency losing 24 percent of its value and setting an unpleasant new record in its history in the process. Russia's Central Bank sharply increased the cost of credit for companies and individuals but the gamble failed to pay off and only temporarily arrested the ruble’s slide.

The Russian ruble has set unwelcome new records over the last few days, plunging drastically against the U.S. dollar and the euro as oil prices continue to drop and confidence in the Russian economy erodes.

During trading on Dec. 15 the ruble decreased by 9 percent against major foreign currencies and on Dec. 16 the plunge continued, exceeding 24 percent, an absolute record in the Russian currency's history. Subsequently, however, the ruble rebounded sharply, rising by 15 percent, before losing value again. Experts believe that the ruble's sudden volatility can be attributed to speculators.

“In the first hours of trading we saw the ruble strengthening rapidly and then falling with practically the same intensity,” says Anton Soroko, an analyst with investment holding Finam.

“Several factors are influencing the dynamic of the Russian currency, or more precisely, its fall. There is a large amount of speculative capital on the market, as a result of which we see inappropriate movements by the ruble that cannot be attributed to fundamental factors.”

No other oil-producing country's currency is falling at such a pace, indicating that other factors are at play besides the price of crude. Press Secretary to the Russian President Dmitry Peskov has said that the ruble's plunge is being significantly determined by emotional and speculative reactions.

“Over the course of a long period of time the ruble's cost was determined by both market and political factors," says Natalya Borzova, Deputy General Director of the Credit Organizations Division at FinExpertiza.

"Today's situation is a direct response to the change of political course and first of all to the actions of the Central Bank, which refused to support the ruble." According to Borzova, it is currently impossible to objectively evaluate the ruble's future because trust in it has been seriously undermined.

"The ruble's sharp recent decline is determined, among other things, by the capital flow out of Russia," says UFS IC's chief analyst Alexei Kozlov. "Consequently, there is an imbalance on the market now between supply and demand, which is resulting in the fall of the Russian currency."

According to Kozlov, the future of the ruble will depend on many factors, including the actions of the Central Bank and the government, which will certainly do everything possible to stabilize the situation of the ruble.

The Russian currency showed signs of a small recovery after Igor Sechin, the CEO of Rosneft (Russia's largest oil company), said that the company would support the ruble and would not buy up dollars on the market.

Experts say that another fundamental factor leading to the decline of the ruble is the fall of oil prices and the negative expectations related to it. In particular, during trading in London on Dec. 16 the price of a barrel of North Sea Brent was down by more than two percent on opening prices. It was trading at a minimum of $58.84 a barrel before prices grew to $59.02.

Earlier, on Dec. 14, 2014, United Arab Emirates Minister of Energy Suhail Al Mazroui announced that the OPEC cartel of oil producers would not decrease its oil production even if prices fell to $40 a barrel.

In reaction to the sudden collapse of the ruble, in the early hours of Dec.16 the Central Bank increased the official interest rate by 6.5 percent from 10.5 to 17 percent - a record in the history of modern Russia - in a bid to stave off further losses.

The last time the Central Bank had raised the rate, which determines the cost of money in the country and is a reference point for banks that give credit to companies and individuals, was on Dec. 11 - from 9.5 to 10.5 percent.

“This is a cardinal decision and it should cool the tempers on the currency market," says Anton Soroko, who says the increase of the official rate will lead to more expensive credit for both businesses and individuals. "However, we wouldn't want the rate to remain at this level for a long period of time because that would result in a sharp decline in Russia's business activity.”

According to Soroko, this would have a serious effect on the population, since consumer credit would become more expensive, as well as on companies, which would experience difficulties financing operative and investment activities.

Anton Soroko, meanwhile, refuses to be pessimistic about the outlook for the Russian economy, expressing the hope that the inexpensive securities of Russian companies could attract an inflow of investment to the country “after the situation on the currency market stabilizes.”