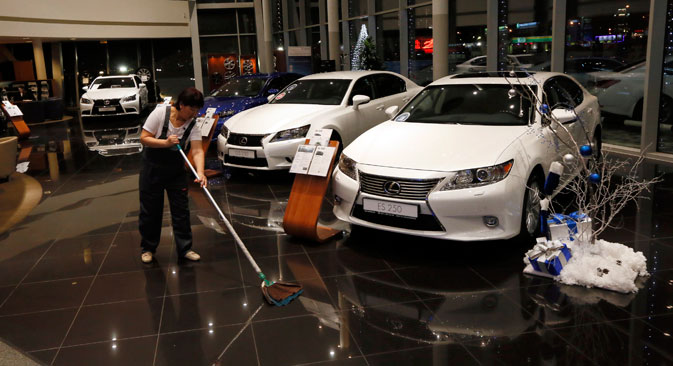 The ruble's dramatic drop against the dollar and euro has prompted dealers to suspend sales of foreign cars and banks to put a freeze on issuing new loans. Even a project to create a new WiFi network in Moscow has been tabled. According to analysts, it is almost impossible to predict the long-term consequences of the ruble's decline for the Russian economy.

The sudden collapse of the Russian currency against the euro and dollar on Dec. 15-16 has unleashed a wave of negative consequences on the Russian economy, analysts assert.

“The key consequences of the ruble’s dramatic decline in recent days is extremely negative for Russians and for the country as a whole,” said Vasily Yakimkin, an associate professor in the Faculty of Finance and Banking at the Russian Presidential Economy of the National Economy and Public Administration.

“Russian banks are now on the verge of panic. Their shares are plummeting,” he said, explaining thatbanks will see a decrease in outgoing loans and incoming deposits in the near future, at the same time that defaults on loans will skyrocket.

Timur Nigmatullin, a financial analyst at the Finam investment holding, said the ruble’s slump primarily carries the risk of destroying any trust market players may have had in the Russian financial system. According to him, “at the moment, currency risks, interest rates, and the risk of regional and federal budgets going unfulfilled are growing too quickly.”

Banks were the first to react to the ruble’s dramatic devaluation. In response to the event, they restricted lending in Russia. Sources at Austrian lender Raiffeisenbank told RBTH that the bank had temporarily suspended loans throughout the entire country.

“Despite heightened volatility on financial markets and the emergency 17 percent increase in the Central Bank’s key rate, Sberbank continues to lend to its clients, including individuals and companies,” said the press office of Russia’s largest bank, state-run Sberbank.

According to the Russian business daily Kommersant, most car dealers have ceased selling vehicles. They did so as soon as it became unclear which exchange rate to set prices at. A ban was also placed on issuing invoices, even for people who had already signed a contract and made an advance payment.

Meanwhile, according to research by the International Air Transport Association (IATA), the exchange rate used in calculating plane tickets for international flights from Russia has skyrocketed by 36 percent in three weeks.

The tumbling ruble is even threatening a program to launch a city WiFi network in Moscow. The people responsible for the project are getting ready to adjust its financial parameters to reflect the switch to domestically produced equipment.

“The weakened ruble has led to growing inflationary pressure, because the country depends not only on exports, but also on imports, as a consequence of which consumer prices are rising,” said Alexei Kozlov, chief analyst at UFS IC.

He said the rising cost of borrowing constrains the normal development of the real sector, which slows economic growth rates and could ultimately lead to recession.

“Declining economic growth rates, together with geopolitical risks, inflationary pressure, and currency instability, will reduce capital’s interest in investing in the country, and as a result it will lead to capital outflow,” Kozlov explained.

As goods and technology become more expensive within Russia, buyers from countries whose national currency has not fallen as far as the ruble have become more interested in making purchases on the Russian market.

According to UCS - one of the largest payment processing companies in Russia - shoppers from Armenia, China, Belarus, Kazakhstan, and other countries dramatically boosted spending in Russian stores in November. There was an 85.73 percent increase in purchases by Chinese buyers, a 78.31 percent rise by Belarusians, and 32.51 growth by Kazakhs.

Residents of Belarus and Kazakhstan were primarily interested in household appliances, demonstrating a 123.1 and 121.85 percent increase in purchases, respectively. Chinese buyers were particularly focused on jewelry and watches, purchases of which ballooned 290 percent.

According to processing company ChronoPay, internet shoppers spent 140 percent more money year-on-year in November using their cards. The number of online shopping transactions was up 27 percent. For Belarus, those figures were 29 percent and 32 percent, respectively.

“Citizens of the CIS have ramped up purchases of expensive and liquid goods, the prices of which have yet to be raised following demand for forex. These goods include vehicles, large household appliances, etc.,” Kozlov said.

Opinion: What awaits Russia’s economy in 2015 after ruble collapse?

Ivan Kopeikin, an expert at BCS Express, said a whole host of factors could stabilize the ruble in the near future. “Today the ruble is rising substantially against the dollar and euro, which is unsurprising after its more than 20-percent decline in the last two days,” he said.

According to Kopeikin, the Finance Ministry announced that it would be selling off the federal budget’s forex balances, which currently amount to $7 billion. However, he warned that no matter how oversold the ruble may be, it almost never starts to grow without an increase in oil prices.