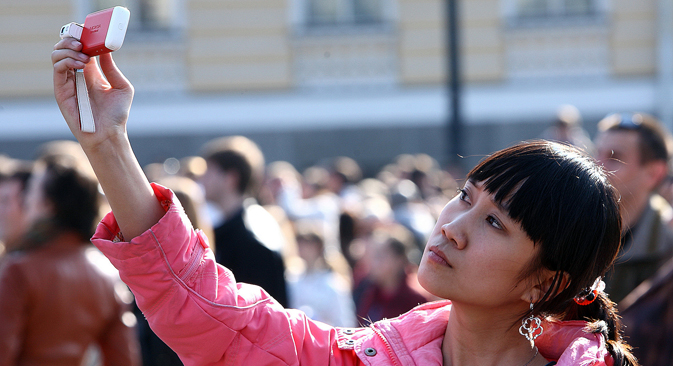 In the first nine months of 2014, the biggest number of foreign tourists came to Russia from China (up 10 percent), whereas visitors from Europe and the U.S., on the contrary, became less numerous. The number of American tourists coming to Russia fell by a third, despite the fact that the depreciation of the ruble has made Russia more attractive for foreign visitors.

The numbers of tourists from Asia visiting Russia are continuing to grow as tourism from the European Union and the U.S. declines, according to new statistics.

In the first nine months of 2014, the biggest number of foreign tourists came to Russia from China: their number grew by 10 percent to reach 358,200 people, said Rosturism, the federal agency overseeing the tourist industry in Russia.

Meanwhile, the inflow of tourists from South Korea saw a record-high growth of 57 percent, reaching 70,000; numbers from Japan also increased, to 49,000 – a rise of 4 percent.

According to official figures (LINK) published by the Russian Federal Statistics Service, the second biggest number of tourists to Russia came from Germany, 318,700 people (down 8 percent); with Americans coming in third, at 120,900 people (down 34 percent compared with last year).

"So far, the deterioration of foreign relations has not affected the inflow of tourists as the shortfall in visitors from the West has been offset by tourists from the east," says head of research at Russ-Invest Dmitry Bedenkov. Furthermore, he adds, domestic tourism in Russia has also increased.

Overall, in the first nine months of 2014, Russia was visited by 24.95 million foreigners, up 4 percent against last year. However, only 2.24 million of them were tourists, 3 percent less than in the same period last year.

Because of the depreciation of the ruble, Russia should in theory have become a more attractive destination for foreign visitors, as prices have shed more than 50 percent of their value in dollar terms in 2014.

"On the surface of it, the weakening ruble is making travel to Russia more attractive since prices, when converted into foreign currency, are down," says Alexei Kozlov, chief analyst with UFS IC. However, in the tourist sector, trends are often formed on the basis of consumer demand rather than anything else.

"The depreciation of the national currency is to the advantage of foreign tourists since their purchasing power is growing," says Dmitry Bedenkov. However, he points out, an acceleration in the depreciation of the ruble leads to a rise in inflation, which is soon reflected in the rise of prices in the tourist sector, including hotels, travel and other services.

According to the Russian Statistics Service, there has been a reduction not only in inbound but also in outbound tourism: In the first nine months of the year, the number of tourists traveling from Russia abroad dropped by 2 percent, to 14.6 million people. The most popular tourist destination for Russians was Turkey (3.056 million people), followed by Egypt (1.9 million) and Greece (976,600 Russian tourists).

"Against a severe depreciation of the ruble, the outbound tourism sector, which has been hit by a series of high-profile bankruptcies this year, remains under serious pressure. Consumer demand for trips abroad, which have become more expensive for Russians, continues to shrink," says Finam Management analyst Maxim Klyagin. According to him, outbound travel may drop by as much as 15-20 percent in the near future.

At the same time, this trend may have a positive side-effect in leading to an increase in domestic tourism. "The weakening ruble makes domestic resorts far more competitive," Klyagin points out.

Having said that, he continues, as is the case with the development of domestic production, in order to make the most of the new opportunities, it is necessary first to address the issues of improving quality and overcoming deficiencies of infrastructure. "The price factor alone cannot ensure a breakthrough in the development of the industry," Klyagin concludes.

Read more: A growing taste for dining out