Is a banking crisis looming in Russia? 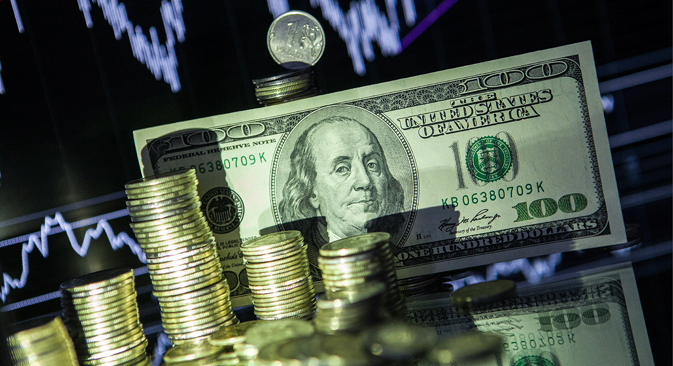 The Russian government will supply banks with nearly $15 billion to help stave off a possible financial crisis. Only banks that are willing to increase credit in the production sector of the economy will be eligible to receive the money. In such a way the government hopes to prevent the possible negative effects of the decline in oil prices and the resulting fall of the ruble.

The Russian government will give banks one trillion rubles (almost $15 billion) to help fight a possible economic crisis. Prime Minister Dmitri Medvedev made the announcement during the Gaidar Economic Forum in Moscow. According to Medvedev, this will provide the banking system with an additional safety net and will help overcome the consequences of the substantial drop in oil prices and the resulting decline of the ruble, which has fallen by 100 percent against the dollar and euro over the last year.

The Central Bank will give financial institutions additional funding through the Contribution Insurance Agency, a special insurance organ that guarantees returns to deposit holders. The funds will be available only for banks that expand credit to the production sector of the economy. Credit institutions wishing to receive additional funds must meet a series of conditions: they must possess their own capital with a value of at least two billion rubles ($385 million) and limit the growth of employee salaries.

"The demands for the banks are not surprising, but they are also not very encouraging," says Anton Soroko, analyst at FINAM Investment Holding. In Soroko's opinion, the capital threshold could have been lower and the demands for crediting key industries could have been different. "With the formulation as it is now retail banks will not be able to use the funds, and they are the ones that will need support in 2016 due to the galloping growth of arrears," says Soroko.

According to Dmitri Medvedev, the advantages of the Russian economy are its relatively small debt, low unemployment rate, presence of currency reserves, as well as society's political unity. At the same time, the government does not intend to "extinguish the economic crisis with money." Yuri Isaev, president of the Contribution Insurance Agency, maintains that about 150 federal and regional banks are eligible to receive government support.

The danger of the crisis

Economists say that the necessity of allotting resources is due to the fall in the ruble. German Gref, president of Russia’s largest financial institution Sberbank, stated during the Gaidar Forum that if Brent Crude oil quotes remain roughly $45 a barrel, the Russian economy may experience a "full-scale" banking crisis. According to Gref's estimates, with the current economic volatility, banks must set aside about three trillion rubles ($46.2 billion) in reserves in 2015. "I don't know how many banks will be able to form such reserves," said Gref.

On the eve of the forum Sberbank disclosed its 2014 financial results. According to the report, the bank net profit fell by 22.1 percent to 305.7 billion rubles ($4.7 billion) due to the formation of substantial reserves. Previous reductions in the bank's profits occurred in 2009 during that economic crisis. Back then Sberbank saw its profits reduced by 300 percent to 36.2 billion rubles ($554 million).

According to the Director of the Analysis Department at Alpha-Forex Andrei Dirgin, a negative factor for banks could be a significant drop in Russia's sovereign ratings. "For this to happen there needs to be a combination of factors like lower oil prices, a weak and volatile ruble and a tightening of the sanctions."

However, Oleg Vyugin, CEO of MDM Bank and former first deputy chairman of the Central Bank, said that, "German's fears are a bit exaggerated. The banking sector will have problems, but most likely they will not be very severe," said Vyugin. Additionally, Central Bank's current First Deputy Chairman Alexei Simanovsky said that, "today the banking system is stable."