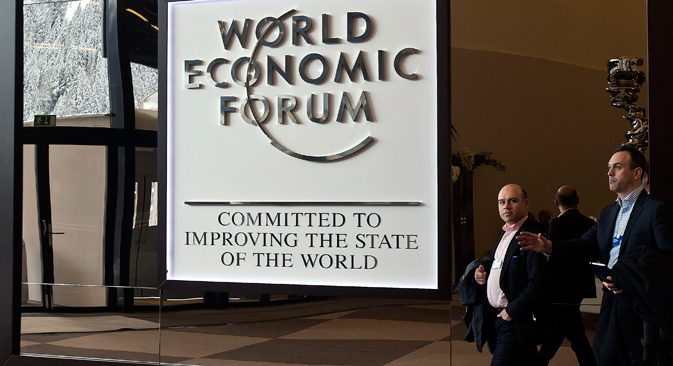 Both Russian President Vladimir Putin and Prime Minister Dmitri Medvedev declined to participate in the forum. The main events within the "Russian Programs" framework are organized by Sberbank and VTB, two state-owned banks currently under EU sanctions. The economic sanctions against Russia were shaping up to be one of the forum's principal themes.

The Russian delegation at the Davos International Economic Forum was headed by First Deputy Prime Minister Igor Shuvalov and Deputy Prime Minister Arkady Dvorkovich, and the main events within the "Russian Programs" framework were organized by Sberbank and VTB, two state-owned banks currently under EU sanctions. Russia's President Vladimir Putin and Prime Minister Dmitri Medvedev both declined to participate in the forum. "The decrease of interest in the Davos Forum is linked first of all to the current lack of dialogue between Russia and the West,” explains Alexei Kozlov, a chief analyst at UFS IC. “However, we shouldn’t say that Russia has become an outcast." In Kozlov's opinion, it should not be ruled out that tensions between Russia and the West could be significantly reduced in the near future and that widespread cooperation could begin anew.

"The Russian contingent consists of top managers of several of the country's largest companies, including VES, VTB, Sberbank, Gazprom Oil and others," says Roman Andreeshchev, professor of foreign area studies and international cooperation at the Russian Presidential Academy of National Economy and Public Administration (RANEPA). Some of these companies, such as the largest state-owned banks VTB and Sberbank, are on the EU and U.S. sanctions list. These institutions are forbidden from obtaining long-term credit from European and American banks. The Swiss government also instituted sanctions beginning in August 2014. At the same time both VTB and Sberbank are Davos's strategic partners, paying an annual contribution of approximately 600,000 Swiss Francs.

In an interview with the TASS news agency, Dvorkovich said that despite the sanctions international investors confirm their obligations regarding investment in Russia. "No one has refused," he said. "On the contrary, everyone says that they will implement the projects in their entirety." Dvorkovich continued by saying that, "in general, everyone thinks that Russia is in a difficult situation," but no one, in his view, is negatively disposed towards Russia.

During the forum economist Nouriel Roubini, who predicted the 2008 global crisis, spoke out against the Russian economic sanctions. "The paradox with Russia is that the sanctions and the fall in oil prices are basically making (Russian President Vladimir) Putin more aggressive rather than less aggressive," said Roubini, speaking at the Price of Instability session in Davos. According to Roubini, Putin believes that western countries intend to replace him, as was the case with Libyan leader Muammar Gaddafi. "In this case, (with the increase of sanctions and the further fall in oil prices) Putin will become more aggressive in the Middle East, the Baltic States, the Balkans and Ukraine," suggested Roubini. This is why, she says, Russia is different from Iran, for whom sanctions serve as a stimulus to improve ties with the West.

In turn, German Chancellor Angela Merkel remarked that introducing the sanctions, in her opinion, had been inevitable, yet in the future they could be canceled if the conflicting sides in Ukraine stick to the Minsk Agreements. Merkel said that the most important thing was to eliminate the reasons for their introduction. "We will not abandon efforts to resolve the situation in Ukraine," added Merkel. "The Minsk Agreements are the foundation for negotiations."

Russian experts believe that the principal discussions on Russia are taking place behind closed doors. "Davos is a place where businessmen and politicians meet, people who have money and power," says Andreeshchev. "Here the most pressing world issues are discussed. But the most important things happen behind the curtains. That's where the main agreements are made."