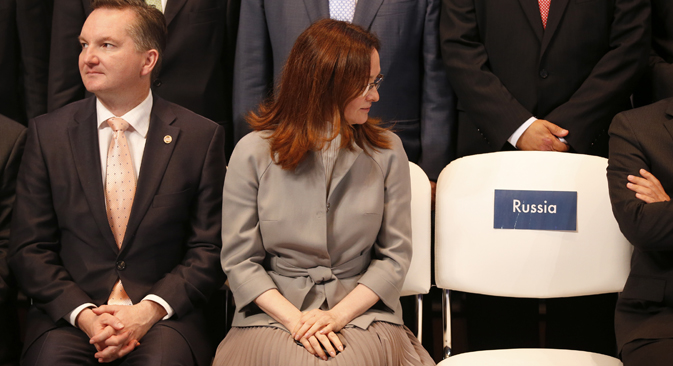 In 2014 Russia witnessed a 250-percent increase in capital outflow as compared to 2013. Moreover, foreign direct investment (FDI) in Russia has practically ceased. Even in the financial crisis of 2008 Russia did not experience such troubling indicators. Analysts believe that in 2015 this trend will persist, although possibly not to the same extent.

Experts have been taken off guard by the figures. The Ministry of Finance had estimated that capital outflows in 2014 would be in the range of $90-100 billion, while the Central Bank had predicted a total of $128 billion.

According to the Central Bank, capital outflow was a consequence of the growth of dollar deposits and the repayment of foreign debts by Russia's private sector due to the limited possibility of refinancing debt because of the economic sanctions imposed on the country.

But the main reason for such a level of capital outflow was the behavior of Russian citizens. In 2014 Russians acquired a record $34 billion through the conversion of rubles, with a significant portion of it being purchased in the fourth quarter. By comparison, in 2008 Russians bought $24 billion. "In recent years the population's income has increased, while the ruble remained sensitive to the fluctuation of currencies,” says Deputy Director of the Gazprombank Center of Economic Forecasting Maxim Petronevich. “This is why it is logical that with the devaluation of the ruble the population began buying foreign currency,"

However, according to Alexander Abramov, head researcher at RANEPA's Center for Financial System Analysis, this doesn’t necessarily mean that this money has left Russia. "It is important to keep in mind that these resources have basically remained inside the country,” says Abramov. “What's changed is the structure of personal savings."

The Central Bank predicts a capital outflow in 2015 of about $118 billion. Experts believe that everything will depend on the continuation of economic sanctions, oil prices and the stabilization of the ruble.

"Oil prices will most likely not return to the levels of $100 a barrel, which means low foreign currency entries," says Yelizaveta  Begulina, head of the analysis department at FBS Brokers. "Furthermore, the condition of the Russian economy will get worse. We predict capital outflow this year to also be above $100 billion."

The Gazprombank Center of Economic Forecasting predicts capital outflow by the end of 2015 to be $100-130 billion, out of which $50-80 billion will be dedicated to the repayment of foreign debt. "The preservation of the sanctions, the possibility of the ruble's further decline and the risk of the reduction of sovereign ratings to a trash level will encourage further capital outflow," affirms Abramov.

Foreign investment is now below zero

Foreign direct investment stopped coming to Russia at the beginning of 2014 according to Central Bank data. The overall amount for the year will be available later, after the publication of the fourth quarter data. The total amount of foreign capital outflow for the first three quarters was $21.7 billion.

The outflow affects all sectors that regularly received FDI including oil and gas, metallurgy, trade, agriculture and real estate investment.

"Currently, there are direct and indirect bans on investing in Russia and our western partners now have doubts about some of Russia's large-scale projects," explains Abramov.

As a result of the cooling off of Russian-German relations, investment in Russian machinery and pharmaceuticals has been reduced. "Many German companies started canceling their investment projects in Russia with 41 percent slowing down their investment," says Begulina. "Moreover, due to the sanctions, the energy sector has also suffered: the exchange of shares between Gazprom and the giant chemical company BASF, which had been in preparation since 2011, failed in December 2014."

"The annulment of direct investment in times of geopolitical uncertainty is a normal phenomenon," says Petronevich. However, in Petronevich's words, nothing has changed in Russia from the viewpoint of fundamental factors. "The market is still big, the workforce from the perspective of the dollar has become even cheaper than in China and electricity is still inexpensive, which is why I think that there are enough incentives to continue the development of production in Russia."