So much for the afterglow: Why Sochi’s economic boost failed to materialize 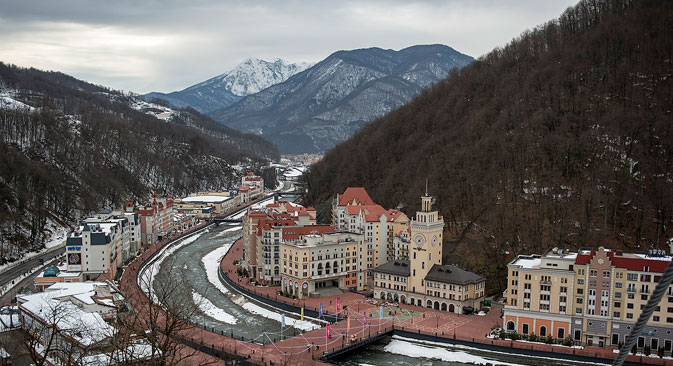 The Winter Olympic Games in Sochi were supposed to give an impetus to the development of the Russian economy, with the Central Bank anticipating that Russia’s GDP would grow by 1.8 percent in 2014, partly as a result of the Olympics. However, observers say that sanctions and the drop in oil prices have annulled the Sochi effect, with the main legacy of the Olympics so far being an increase in the number of tourists visiting the Black Sea city.

One year ago, Russia was basking in a wave of euphoria and national pride as the curtain rose on its showpiece Winter Olympics in the Black Sea resort of Sochi, in the southern Krasnodar Territory. The city underwent large-scale redevelopment as part of the country’s ambitious plan to make their edition of the Games the most impressive in history, with the overall cost of hosting the event eventually rising to an unprecedented $51 billion.

This year more than 13 million tourists visited the Krasnodar Territory, the Russian news agency TASS has reported, citing the regional administration. According to the officials, the popularity of Sochi has soared due to the "Olympic effect."

The Olympics in Sochi have added about 0.3 percent to the country’s GDP, said Timur Nigmatullin, a financial analyst at the Finam investment holding. "Hence, the project has proved to be successful enough, regarding the efficiency of state investments," he said.

According to Nigmatullin, the number of tourists who visited Sochi in 2014 increased by 31 percent to 5 million, about 10 percent of which were foreigners. However, the main effect of the Olympic Games has since been nullified by sanctions; the Russian authorities had initially counted on a more impressive result.

The main effect of the Olympics was intended to be a growth in GDP. Specifically, GDP was projected to grow by 1.5-1.8 percent, according to the expectations of the Russian Central Bank.

Furthermore, according to early forecasts by Bank of America Merrill Lynch, the Olympic Games could have become a catalyst for structural reforms needed to accelerate economic growth in Russia, as well as to improve the quality of government regulation.

"First and foremost, the 2014 Winter Olympics were a political project, so no one seriously expected them to recoup the investment in full from the very start," said Sergei Bespalov, senior researcher at the Russian Presidential Academy of National Economy and Public Administration's Social Sciences Institute.

According to Bespalov, most of the budget was spent not directly on the construction of the Olympic site, but on developing the infrastructure of Sochi, Russia's main resort. "However, after Crimea became part of Russia, a large number of tourists reoriented toward this destination, which was impossible to foresee even a year ago," he added.

According to Nigmatullin, the new infrastructure will significantly increase Sochi's income from the tourism industry for years to come, adding that the demand for domestic tourism is currently being driven by the weakening of the ruble.

"In the future, the attractiveness of Sochi for both foreign and Russian tourists will largely depend, in particular, on whether the Russian authorities will be able to ensure that Sochi hosts major international competitions, first and foremost stages of World Cups in winter sports,” Bespalov added.

Nevertheless, Nigmatullin believes that the Olympics will hardly be able to fully compensate for the effect of economic sanctions, especially those directed against the financial sector.

"Increased geopolitical tensions and anti-Russian sanctions are unlikely to allow the economic preconditions created by the Olympic Games to be fulfilled in the foreseeable future," Bespalov said.

At the same time, he said, "in the case that the situation is resolved, one can expect that major investors will take into account the positive experience of Sochi, when taking decisions regarding Russia."