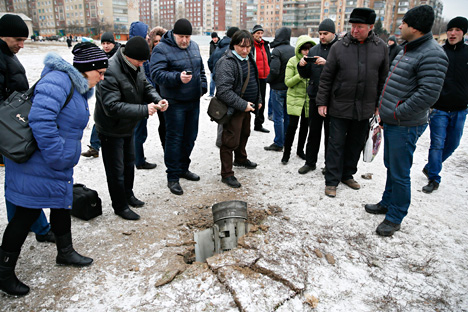 RBTH presents a selection of views from leading Russian media on international events, featuring analysis of the prospects of crucial talks in Minsk of achieving a breakthrough as fighting intensifies in eastern Ukraine, as well as a report on the divisions in the U.S. political elite over the question of whether to supply Kiev with lethal military aid.

Intensification of conflict in Donbass endangers chances of peace deal

The business daily Kommersant analyzes the situation on the eve of crucial four-way peace talks in Minsk between the leaders of Russia, France, Germany and Ukraine, aimed at attempting to resolve the deadlock between Russia and the West over Ukraine.

The newspaper writes that the prospects of the Minsk summit are still foggy, since the conflicting sides in the Donbass region of eastern Ukraine have shown no willingness to halt military activities. The leadership of the region’s self-proclaimed Donetsk and Lugansk people’s republics (DPR and LPR) has announced that rebel forces have surrounded the Ukrainian troops in the government-held pocket of Debaltsevo. The Ukrainian side, however, has not yet officially recognized this fact, reports Kommersant. There has also been news of an advance by Ukrainian forces on the coastal city of Novoazovsk, while Kiev has reported that the rebels fired rockets at the Ukrainian army’s HQ in Kramatorsk. Thus, on the eve of the summit Kiev has acquired yet another argument for its firm position on the unacceptability of any official talks with the DPR or LPR.

Press Digest: Obama and Merkel stake out position ahead of Minsk talks

According to Kommersant, the sharply intensified information war between Kiev and the self-proclaimed republics has reduced the chances of a breakthrough in Minsk, though the newspaper points out that the fact that the summit is even being held in a time of drastic military escalation is already a success.

The RBC daily tries to predict what we can expect from the meeting in Minsk.

The newspaper reports that on the eve of the meeting the West demonstrated that it is willing not to increase pressure on Russia if Moscow cooperates. Foreign ministers from the EU countries approved new sanctions against Russia on Feb. 9, but have postponed them pending the results of the talks. If the talks fail, however, Moscow will face new sanctions.

RBC remarks that Russia is willing to listen to constructive proposals from the West as well as advance its own. Russia wishes to create a demilitarized zone in the Donbass. Moreover, Moscow insists that Kiev recognize the representatives of the "people's republics" as full-fledged participants of the talks.

It is also unclear who will be responsible for monitoring the withdrawal of troops from the area: Moscow wants the OSCE to assume this role. But the international organization itself, with support from Berlin and Paris, wants Russia to take on the responsibility of regulating the conflict in Ukraine, writes RBC.

Disagreement on supply of arms to Ukraine is splitting American elite

The Vzglyad newspaper reports that the preliminary meeting between U.S. President Barack Obama and German Chancellor Angela Merkel in Washington on Feb. 9 did not yield the results that the U.S. Congress had been expecting: the American president did not respond to the question about supplies of lethal arms to Ukraine.

According to Vzglyad, the issue of supplying arms to Kiev has split American politicians into two camps. However, this is not the usual situation with the "Republicans against the Democrats." Opinions in the Democratic Party have divided its members between those supporting former Secretary of state Hillary Clinton and those supporting her opponents. On the other hand, the Republicans, who are the main advocates of supplying arms to Ukraine, are united in their position.

"Regarding the U.S. political leadership, everyone approves of supplying arms to Ukraine," Vzglyad quotes Vladimir Vasiliev, senior collaborator at the Russian Academy of Sciences’ Institute of U.S. and Canadian Studies, as saying. "First of all, this is the position of the Republicans in Congress. Vice President [Joe] Biden, Secretary of Defense nominee [Ashton] Carter and National Security Advisor [Condoleezza] Rice all have tough positions on the issue. Moreover, a series of democratic senators also believe the United States should supply Kiev with arms."

Boris Mezhuyev, a political analyst, America expert and co-editor of the Russian website Terra America, explained that Obama's rating increased when he said that Russia was America's main enemy. "It was very advantageous for him to use Russia as an enemy, without essentially undertaking any military action," says Mezhuyev. "But he could not continue this policy forever. That is why Obama will oscillate to the very end, not making any fatal decisions about the supply of arms."