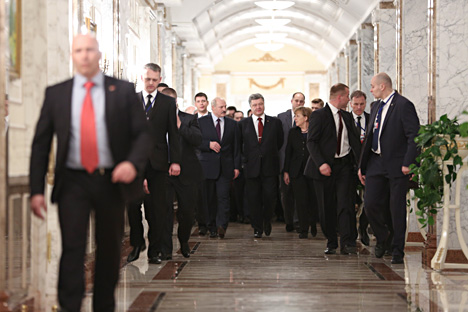 The four leaders meeting on Wednesday for peace talks in Belarus on the Ukraine crisis are planning to sign a joint declaration supporting Ukraine's territorial integrity and sovereignty, a Ukrainian delegation source said. Source: Reuters

RBTH presents a selection of views from leading Russian media on international events, featuring analysis of the new Minsk agreement on resolving the conflict in Ukraine, a report on the EU perspective on relations with Russia post-Minsk, and an update on the situation surrounding the delivery of French-built Mistral warships to Russia.

Unsurprisingly, the Minsk peace talks are the main topic of discussion in the Russian media, and business daily Vedomosti follows suit. "The most valuable thing about the Minsk Agreements is that they present a schedule of actions, rather than a collection of disjointed measures similar to the previous ones," writes the newspaper.

Citing a source close to the Russian delegation, Vedomosti writes that the biggest difficulties in the talks are represented by the points concerning the elections on the territories that Kiev does not control, as well as the lifting of the Ukrainian transportation and financial blockade on the rebel territories in the Donbass region of eastern Ukraine. The newspaper remarks that the leaders' declaration mentions these points separately, along with the promise that France and Germany will help restore the banking sector in these territories. According to Vedomosti, this means that if the ceasefire is a success, these countries may provide the Donbass with economic assistance, something that Ukraine refuses to do.

However, the newspaper fears that the agreements "may be sabotaged by the first serious mine" - the fate of the encircled Ukrainian troops in the Debaltsevo pocket. To avoid this, Russian President Vladimir Putin has agreed with his Ukrainian counterpart Petro Poroshenko on the creation of a group of military experts that will try to solve the problem.

Vedomosti quotes Fyodor Lukyanov, editor-in-chief of the Russia in Global Politics magazine, who says that the most important thing about the documents signed, in comparison to the Minsk agreements of September 2014, is without doubt the great extent of political participation and attention they have received. "The Kremlin's main achievement is a point in the document stating that Ukraine promises to adopt a new constitution," says Lukyanov.

EU in no hurry to normalize relations with Russia

The Kommersant business daily summarizes the informal summit held in Brussels between leaders of the EU countries on Feb. 12. The participants of the meeting welcomed the agreement signed in Minsk, but made it clear that it was not enough to normalize relations with Russia. Moreover, in case the peaceful solution fails, the EU is ready to continue strengthening sanctions and even freeze relations with Moscow. Kommersant writes that the opinions of European politicians are divided: German Chancellor Angela Merkel announced that "there is a glimmer of hope," adding, however, that "it is necessary that words are followed by deeds;" Lithuanian President Dalia Grybauskaitė told journalists that EU leaders will not discuss further sanctions against Russia and hope that the new Minsk agreements will be realized.

In the words of a Kommersant source in the EU, before deciding on the future of the sanctions, the EU must first be convinced of the stability of the ceasefire in the Donbas. One source in the EU leadership has said that the EU is willing to discuss a de-escalation in relations with Russia. Kommersant believes that the next step in the course of de-escalation may be the visit of Deputy Secretary General for the EU’s External Action Service Helga Schmid to Moscow on March 2.

The Moskovsky Komsomolets tabloid newspaper reports on French President Francois Hollande's announcement that the conditions for supplying the Mistral warships “are still not right." According to the French president, this will first of all depend on whether the ceasefire is followed and whether it will become effective. "In such a case the sanctions will gradually be removed," Moskovsky Komsomolets cites Hollande as saying. Hollande also suggested taking a best-case scenario approach: the EU may cancel a series of sanctions. In that case France, in Hollande's view, will join the process. 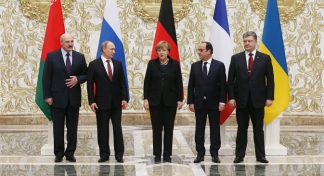 French Foreign Minister Laurent Fabius also spoke about this issue in his statement on Feb. 12. According to Fabius, the deal between Russia and France remains frozen, despite the positive results of the Minsk meetings. Meanwhile, the newspaper writes that a military and diplomatic source from  has said that France may make the decision to supply the Mistrals to Russia in the upcoming days and the ships could be ready for delivery in the first half of March.