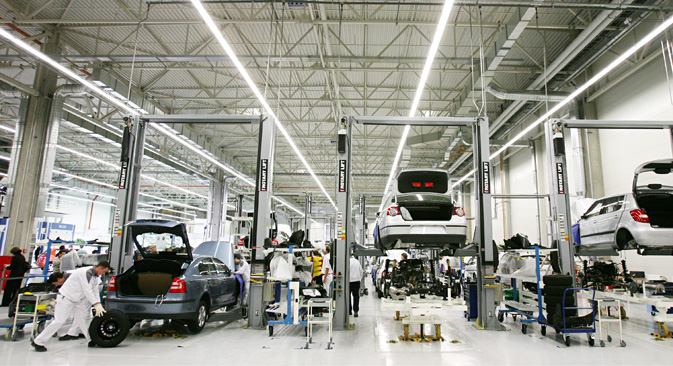 According to the Federal State Statistics Service (Rosstat), production of light cars in Russia in January 2015 decreased by 45 percent in comparison to December 2014. Source: DPA/Vostock-Photo

Results for 2014 show that Russia’s auto industry has been thrown into crisis by the devaluation of the ruble, with a drastic fall in car sales registered over the past year as Russians’ relative income has decreased and production costs have risen. According to observers, the situation is so critical that it is threatening the work of foreign producers in Russia, some of which have already announced a halt in production.

Russia’s car industry is facing drastic cuts in production as the devaluation of the ruble and inflation hit both consumers and manufacturers in the pocket, with statistics for 2014 showing a dramatic plunge in car sales against a backdrop of rising costs.

In turn, according to the Association of European Business, car sales in January 2015 also fell by about 25 percent in Russia.

Analysts for PricewaterhouseCoopers (PwC) say that in 2014 Russia's car market was determined by the complex macroeconomic situation in the country and the significant fall of the ruble. As a result, according to PwC statistics, sales of light cars in Russia (excluding LCVs) in 2014 declined by 10.1 percent to 2.3 million units.

Furthermore, the other BRICS countries (Brazil, Russia, India, China, South Africa) also experienced declines in car sales, except for China. At the same time, the developed markets in America, Europe and Japan showed a positive trend.

The fall in demand has already had an impact on producers. In the middle of February the Renault factory was closed for three weeks due to the lack of demand for cars.

In turn, the General Motors Corporation decided to suspend production at its plant in St. Petersburg from March 23 to May 15, even though in the beginning of October 2014 the enterprise had cut production to a single shift. Ford Sollers has also announced that it is ready to halt production in Russia.

"The situation in the car market is rather complicated, and in the near future we can expect a series of distributors to close," says Alexander Zilberman, project director at FinExpertise.

According to chief analyst at UFS IC Ilya Balakirev, right before the turn of the year a large number of customers made "panic" acquisitions in an attempt to preserve their ruble savings. A similar situation was observed in other durable goods segments, including real estate and home appliances, says Balakirev.

According to Balakirev, there was a moment when dealers started raising prices, but customers nevertheless continued buying. As a result, in 2015 people who can afford a car and would buy one have actually already bought it before the turn of the year. In turn, producers were forced to raise prices on new deliveries, since the cost of cars is, in one way or another, linked to major foreign currencies, which by the beginning of 2015 had nearly doubled against the ruble.

"Consequently, the market experienced a discrepancy: On the one hand, there were customers who had already bought a substantial part of the deferred demand, and on the other, there were producers who were forced to raise prices," says Balakirev.

The prospects of development

PwC predicts that the growth in car prices registered at the end of 2014 will continue in 2015, which will have a negative effect on market dynamics. "In these conditions car owners and future customers begin to pay more attention not only to the brand and the car's characteristics, but also to the costs of possessing it," say the company’s analysts.

Foreign affair: Which brands have captured the hearts of Russians?

The future of the world auto industry on display in Moscow

According to experts, the expected sales decline in 2015 could lead to many brands abandoning the Russian market. As of today practically all the large international car producers have readjusted production in Russia. Car producers with a relatively low volume of sales in Russia are the ones that are at risk.

"Car producers that have a high level of production localization in Russia, first of all Russian producers, are the ones who have found themselves in an advantageous position," say PwC representatives.

In 2014 net losses of Russia's largest auto producer, AvtoVaz, increased by 3.7 times to 25.4 billion rubles ($406 million). The company explains that one of the reasons was the devaluation of the ruble, since 20 percent of the production cost of its Lada models is spent on imported components.

"According to our estimates, if the government gives the car market sufficient support, the 2015 decline in car sales in Russia will be 20-25 percent, otherwise it will be about 35 percent," says director of auto industry consulting at PwC Russia Sergei Litvinenko.

In Ilya Balakirev's words, the market is expecting a very heavy collapse, the duration of which will depend on the general economic situation, the availability of credit and the willingness of producers to lower prices. Otherwise the demand will transfer to the used car segment, where the growth in prices is still rather unremarkable.