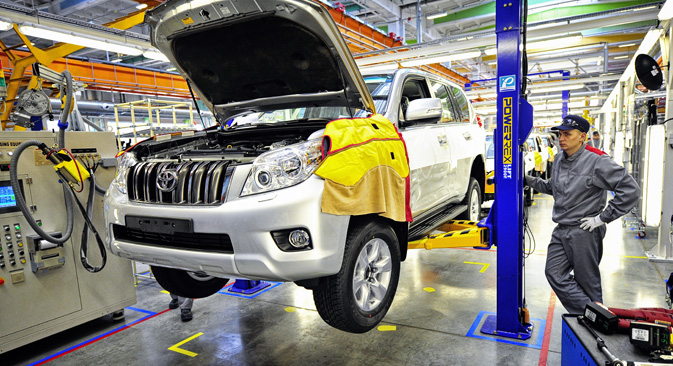 Toyota rose from eighth to sixth in the ranking of brands purchased by Russians in January. Source: Yuri Smityuk / TASS

Toyota will follow Nissan in expanding capacity of its plant outside St. Petersburg

Japanese carmaker Toyota confirmed last week that it plans to double the production capacity of its plant in St. Petersburg from the current 50,000 to 100,000 cars per year. The news is a rare positive for the auto industry in Russia, which has been hard-hit by the economic crisis.

As recently as 2013, Russia was projected to become one of Europe’s leading car markets. However, the devaluation of the ruble sharply reduced demand for cars among Russian consumers. Car sales declined more than 24 percent in January alone and analysts from Avtostat, which tracks the industry, is predicting a 40 percent decrease in sales this year.

The demand for Toyotas, however, is growing among Russians – the company rose from eighth to sixth in the ranking of brands purchased by Russians in January. Although the company’s overall sales decreased by 14 percent, according to data from the Association of European Businesses, sales of the company’s flagship Camry model are on the rise. Last year, sales of the car increased by 3.7 percent.

The Camry is the only Toyota model produced in Russia.

Azat Timerkhanov, an analyst with Avostat , said that while increased localization is a positive move, it isn’t a silver bullet. "Localization can help to increase market share, but at the same time the localization level must be high in order to be less dependent on the exchange rate,” Timerkhanov said. “The prices of foreign cars imported to the Russian Federation or the ones that are assembled in the country, but with a low level of localization of components, increase the most.”

In December, Nissan also doubled the capacity of its plant in St. Petersburg – up to 100,000 cars a year.

"Now the plant can produce five models simultaneously. At the moment these are Teana, Murano, Pathfinder and X-Trail. We have already announced that the plant in St. Petersburg will start production of Nissan Qashqai at the end of 2015,” Nissan spokesman Roman Skolzky told RBTH.

Nevertheless, Nissan's sales dropped by 18 percent in January, although it remained fourth in the ranking of Russian car sales by brand.

The Nissan plant is not currently working at capacity, but according to Skolzky, it regularly slows down its production activities in February.

"Layoffs and pay cuts are not planned. The current economic situation calls for optimization of costs and headcount, which involves the suspension of the recruitment of workers at the plant," Skolzky said.