US sanctions against Russia: A tale of two cities 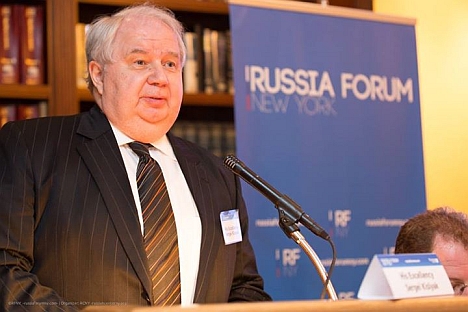 As Ambassador Alexander Kislyak noted in his opening remarks, Russia is still “open for business” and there’s no need to fear a return of the Cold War. Source: Russia Forum New York

At Russia Forum New York 2015, investors and business leaders weighed in on the ineffectiveness of Western sanctions against Russia, suggesting that they threatened to hurt the small businesses and entrepreneurial startups that are at the core of any future US-Russian relationship.

In many ways, New York and Washington couldn't be more different in how they view sanctions. While the Washington foreign policy elites are pushing to ramp up sanctions against Russia, arm Kiev and ostracize Russia on the world stage, it’s a completely different scene in New York, where multinational managers, venture capitalists and institutional investors are looking for ways to roll back sanctions, find new avenues for business cooperation and integrate Russia into the global economy.

At Russia Forum New York 2015, hosted at the Princeton Club in midtown Manhattan by Russian Center New York and sponsored by the Gorchakov Fund, Ethnomir and the Congress of Russian Americans, these differences between how the elites of Washington and New York view Russia came into stark contrast.

The event, which focused on the current Russian investment climate, consisted of a keynote by Russian Ambassador to the United States Sergey Kislyak and a set of three panels, each focusing on a different aspect of the U.S.-Russian business relationship: “Economic Cooperation,” “Commerce and Innovation” and “Media and Business.”

The Russia Forum New York followed the two-day World Russia Forum in Washington, which was organized by Edward Lozansky, president and founder of the American University in Moscow. This year’s World Russia Forum marks the 35th annual meeting of the US-Russia Forum, dedicated to constructive dialogue in the U.S.-Russia relationship.

As Ambassador Kislyak noted in his opening remarks, Russia is still “open for business” and there’s no need to fear a return of the Cold War even if the U.S. is attempting to isolate Russia both diplomatically and economically. The good news, Kislyak says, is that Russia is redoubling efforts at diversifying and modernizing its economy, including more emphasis on diversifying by geographic region.

As a result, the ruble has stabilized, the Russian economy is showing signs of positive growth in 2015 (even if it’s “miserably low”) and the feared credit crunch of February 2015 (when Russian companies were scheduled to pay back significant amounts of dollar-denominated debt) never materialized. In fact, Kislyak says, trade between the U.S. and Russia is still very much active, and actually increased by almost 5 percent in 2014, despite the U.S. economic sanctions against Russia.

And it’s not just that economic sanctions against Russia are not having their desired effect. The U.S. policy of isolating Russia on the world stage may end up boomeranging and hitting the very people it was not supposed to impact – multinational companies that have invested in Russia for the long-haul, smaller companies, entrepreneurs, and young Russians who have embraced both globalization and innovation.

This was a complaint voiced continually at the forum, as speakers such as James Min of Deutsche Post DHL, Cyril Geacintov of DRG International and Dmitry Akhanov of Rusnano USA explained how sanctions have impacted their own businesses directly and why sanctions are hurting U.S. small business owners and young Russian entrepreneurs far more than they are hurting Russia’s largest state-backed corporations.

Even some Russian foreign policy insiders in Washington are starting to make this point. The most eloquent case for re-thinking sanctions was recently made by Samuel Charap, senior fellow for Russia and Eurasia at the International Institute for Strategic Studies, andBernard Sucher in an op-ed for the New York Times: “Why Sanctions on Russia Will Backfire”. Similar to the viewpoints expressed at the Russia Forum New York, Charap and Sucher argue that sanctions are impacting the wrong people and that they unfairly punish Russia for integrating into the global economy and embracing the American-led global financial system.

So if sanctions against Russia don't make any sense, why pursue them?

The short answer is that sanctions are a form of low-hanging fruit for American politicians and diplomats, eager to show that that they are doing something – anything – to punish Russia for its annexation of Crimea and involvement in Eastern Ukraine.

In many ways, though, the logic for this strategy can be traced back to a fundamental problem – there’s simply not enough trade between Russia and the U.S. to make business incentives outweigh political incentives. Yes, trade between the U.S. and Russia may be growing, but total annual U.S.-Russian trade is estimated at only $40 billion by Russian Ambassador Sergey Kislyak. (By way of comparison, the Sochi Winter Olympics cost Russia $50 billion.) In terms of total annual U.S. trade, $40 billion is a drop in the bucket and a very easy way to punish Russia in a highly public manner.

In the end, though, trying to wreck Russia and bring about regime change by using the economy as a foreign policy lever may backfire. As Marcos Troyjo, director of BRICLab, pointed out during his presentation at Russia Forum New York, we may be on the cusp of a fundamental change in the global economy driven by factors outside of the control of either Russia or the United States. Ukraine, now viewed as a geostrategic crisis, might one day be viewed more properly as a geo-economic crisis brought on by changes in how the world thinks about “deep globalization.”

In 2015, the world is likely to see a robust period of “re-globalization” featuring entirely new trade blocs (including, perhaps, the Eurasian Economic Union and the BRICS), the growth of an even more powerful China, and a shift from “comparative advantage” to “competitive advantage.” As Troyjo noted, these factors could combine to create “new trade and investment geometries.”

The hope in New York investment circles, of course, is that these changing geometries of capital flows will lead to changing geometries of political thinking. In other words, in a global financial system no longer created, run and controlled by America, there might be need to reassess where Russia stands in the global economy. And, as Derek Norberg, executive director of the Russian-American Pacific Partnership (RAPP) suggested in his presentation, that might be reason enough to stop giving Russia “the silent treatment” when it comes to possible economic cooperation.

But it will take time for any of this political thinking to take hold. The Washington foreign policy elites are still all dialed into the triumphalism of the Cold War. None of the speakers at the Russia Forum New York seemed overly optimistic that a fundamental mindset change could happen during the current Obama administration - and maybe not even if Republicans win the presidency in 2016. What it might take is a new, non-interventionist candidate such as Rand Paul and an American electorate tired of endless wars in Afghanistan, Iraq and Syria (and now Yemen) for any attempt to rollback policies that punish Russia’s business leaders rather than Russia’s government elite.

At the end of the day, it’s up to America’s business leaders to change the narrative about Russia. Natalie Sabelnik, chair of the Coordinating Council of Russian Compatriots in the U.S., suggested at the Russia Forum New York that “this is the window of opportunity” for Russian and American business leaders. In short, we’ve had one year to see that sanctions have not been successful.

This potential mindset change, whether hopeful or real, is highly evocative of Charles Dickens and his famous opening lines of “The Tale of Two Cities.” How will leaders in New York and Washington choose to view Russia? When it comes to the U.S.-Russian relationship, are we currently experiencing “the worst of times” (as the Washington elite would suggest) or is it the “best of times” (as Russia’s investors, entrepreneurs and small business owners would suggest)? Is it the “age of foolishness” or the “age of wisdom”? And, most importantly, will the “winter of despair” be followed by a “spring of hope”?