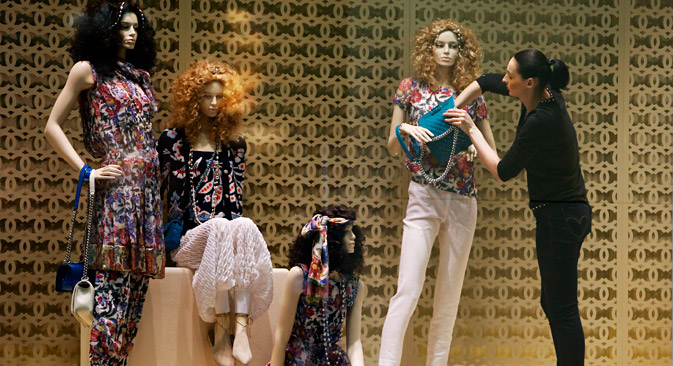 Russia's mid-price clothing segment is shrinking as international companies move out of the market. Source: Reuters

Eleven international clothing brands have abandoned Russia in the last year as the ongoing financial crisis forces the mid-price segment out of the market. Sensing an opportunity, budget labels are moving in to take its place. Online Asian stores, with which western players find it difficult to compete, have also embarked on an aggressive campaign.

Buffeted by the winds of the economic crisis sweeping the country, Russia’s clothing sector is undergoing a profound polarisation as international mid-range players abandon the market, leaving it dominated by the elite and low-price segments, the latter of which is moving to cash in on the decreased spending power of the average consumer.

For commercial networks operating in Russia, 2015 began with losses: Demand for clothes, footwear and accessories has fallen by 27 percent in the first three months of 2015. “This has forced international retailers to reduce their presence in Russia,” says Darya Yadernaya, General Director of Y Consulting.

In response, Germany’s Adidas Group, due to the worsening financial indicators, is closing 200 low-profit retail shops - almost 20 percent of the total number of the brand's stores in Russia. The Finnish department store Stockmann has announced that it will close three out of eight stores in Russia by the end of the year and that it will completely liquidate its network of shops belonging to the Lindex fashion chain.

The cheaper, the more popular

According to CBRE, 11 international brands have abandoned the Russian market in the entire period of 2014-2015. The mid-priced companies that have already headed for the exit include Chevignon, Gerry Webber, and Sepalla, as well as representatives of the cheap mass-market segment – Esprit, New Look, OVS, River Island and Wendy’s.

Yelena Klyucharova, a consultant from CBRE's research department, stresses that the phenomenon concerns small companies – which in total represent less than two percent of the international brands present in Russia. The small scale of these networks makes it impossible to keep financial indicators at a stable level, which is why even cheap brands, those that are now becoming popular among Russians, were not saved from the crisis.

On the contrary, larger companies working in the affordable segment are now entering the Russian market. "Mid-priced segment customers will orient towards the mass market during a crisis," remarks Klyucharova, "and now the niche for affordable, recognizable brands in Russia is open for new players."

Among the new arrivals that have announced their entry into the Russian market by the end of 2015 are budget brands such as Cortefiel, Superdry and Violetta by Mango. Meanwhile, H&M, Monki, Uniqlo and Forever 21 have said that they are expanding their business in Russia due to the relative decrease of rent prices in dollar terms, and continue to announce the opening of new retail outlets.

However, no matter how affordable the prices of the European and American mass-market segment are, they find it difficult competing with Asian stores, which are expanding their online presence in Russia. A dress that costs from $2 to $10 in China will cost from 20 to 50 euros in a European online store. As a result, the unprecedented low prices guarantee the Asian sellers a growth in demand.

In 2014 alone the popularity of online orders from Asia, primarily from China, increased three times over, says Klyucharova. Seeing the growing demand in Russia, Asian online retailers are now willing to enter the Russian market by themselves and are investing in their business there. An example is AliExpress, the largest Chinese online retailer, which built its logistics structure in Russia with the help of local operators. Currently, according to TNS Global, the number of individual AliExpress site users in Russia is 17.5 million a month.

Vasily Lazuka, General Director of RealWeb, which promotes online resources, confirms this trend: "The amount of requests coming from Asian resources wanting to develop in Russia has drastically increased: There was a peak in their activity toward the end of last year," he says.

According to RealWeb, vast Chinese online retailers such as TalBao, Light In The Box and TinyDeal are also planning to move into the Russian market. They offer clothes, footwear, accessories, gadgets, jewelry, mobile telephones, athletic goods and toys.