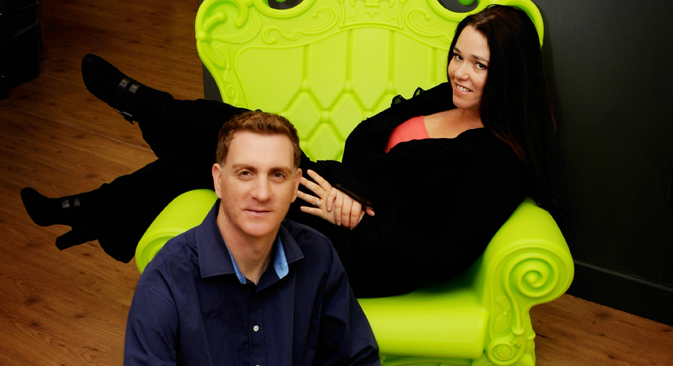 Houzz, the American online company which provides services in design and home improvements, is entering the Russian market, backed by investment from Mail.Ru founder Yury Milner’s DST Global. Market insiders consider this to be a timely decision: The growing Russian home & decor market is set to spill over onto the internet.

Houzz CEO Adi Tatarko (right): "Now is a good time to start thinking about such things as your home." Source: Press Photo

American home decoration platform Houzz is set to capitalize on the growing market for home improvements in Russia. The online company opened an office in Russia at the beginning of the year, and released its Russian language version of the site at the end of March.

A source close to Houzz, said that the company, which opened offices in Germany, Australia, the UK and France in 2014, spent $100,000 on the opening of their office in Russia, based on the estimated market worth $20 billion.

Speaking about the opening of the business in Russia, co-owner and Houzz CEO Adi Tatarko said that there were firm grounds to believe the project would be a success: "Before we decided to come to Russia, even before the official launch of the platform, we had more than 3,000 specialists working in Russian,” said Tatarko.

According to Houzz’s own research, in Russia 68 percent of those who intend to renovate their houses over the next two years plan on hiring a professional. Houzz estimates the market for home improvements and renovations, without taking into account furniture, to be worth $20 billion. For comparison: The American market is evaluated by the company as being worth $300 billion.

“I mean, architects, designers, builders and others. All of them cooperated with more than 100,000 users – homeowners or tenants.

“This is a very good start. The economic downturn does not scare me at all – on the contrary, now is a good time to start thinking about such things as your home, because there are many options for renovation on a limited budget, and many goods are cheaper during crises."

At present, Russia can hardly be said to be one of the most active users of Houzz, with the site getting – as Tatarko noted – about 100,000 visits each month from Russian IP addresses. The web counter SimilarWeb indicates that 62.3 percent of traffic to the site comes from the U.S., 6.8 percent from Canada, 4.3 percent from the UK, 3.8 percent from India, and 2.2 percent from Australia. The company believes that by releasing a localized version, the Russian audience will increase by a factor of 10 over the next few years.

To make money from the Russian market, the service will use models that have been successfully applied to other markets. Houzz.com makes profits from advertising, premium accounts for professionals and commissions from sales on its sales platform. The sales platform is used not only by internet stores but also by independent designers.

According to Inmyroom.ru founder Ivan Khmelevsky, not only does the Russian market have huge potential, it also has its own peculiarities: "The number of new developments is growing and will grow – this will lead to an entire home and décor industry which will unavoidably end up on the internet,” says Khmelevsky.

Based on materials from Kommersant and RBC Daily.