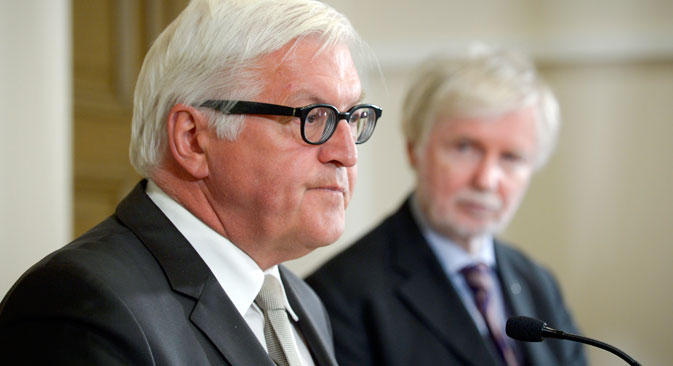 German Foreign Minister Frank-Walter Steinmeier: G7 countries would like to see Russia as part of G8 again, but it's currently not possible. Source: EPA

RBTH presents a selection of views from leading Russian media on international events, featuring a report on how the fate of the nuclear deal with Iran depends on the U.S. Congress, news of Germany’s support for Russia’s re-inclusion in the G7, as well as reaction to the news that U.S. President Barack Obama intends to exclude Cuba from Washington’s list of state sponsors of terrorism.

German foreign minister: It is useless to discuss global conflicts without Russia

Nezavisimaya Gazeta reviews the meeting of foreign ministers from the G7 group of industrialized nations in the German city of Lübeck on April 14. According to the newspaper, the words of German Foreign Minister Frank-Walter Steinmeier, who expressed his conviction that the G7 would benefit from the return of Russia, have become an important signal. Nezavisimaya Gazeta notes that the forum participants acknowledged that the lifting of sanctions against Russia is possible with the full implementation of the Minsk agreements.

In comments made to Nezavisimaya Gazeta, Institute of Europe Deputy Director Vladislav Belov pointed out that for several months Germany, represented by Steinmeier, has been drawing the attention of Western nations to the fact that, despite sanctions, Russia remains a major player on which the security system in Europe and the world as a whole depends, and that there can be no progress in reforming this system without Moscow's participation.

However, “consensus regarding the return of Russia to the G7 will not be reached soon,” said Belov. “This issue is being discussed in the context of the easing of the pressure of sanctions,” he said, arguing that Moscow has long put forward constructive initiatives that were read by the West as disguised attempts to exclusively promote Moscow’s own interests. “Had the dialogue started earlier, it would have been quite possible to avoid the Ukrainian events of November 2013 – February 2014,” said Belov.

New obstacles have emerged to the resolution of the Iran nuclear crisis, the business daily Kommersant reports. A U.S. Congress committee has approved a bill requiring President Barack Obama to present the agreement with Tehran for consideration by legislators after its signing. At the same time, Congress has reserved the right not to approve the deal with Iran in a month's time and delay the lifting of unilateral sanctions against Tehran.

The president will have 12 days to impose a possible veto on the decision of the legislators, the newspaper adds. However, if at least 67 senators vote against the deal with Iran, Barack Obama will not be able to wield a veto. Kommersant notes that Obama, who is set to make the agreement with Iran his key foreign policy legacy, has chosen not to engage in a tough clinch with Congress.

The White House made it clear that Obama will sign the bill, though he is far from delighted by the Congress initiative. In response, the Iranian leadership has put forward an ultimatum to the United States: The sanctions should be lifted on the day of the signing of the agreement, and any subsequent verification by Congress is out of the question, the newspaper reports.

"There have been instances in the history of the negotiations on the Iranian nuclear program when the agreements were broken at the last moment," PIR Center expert Andrei Baklitsky said in comments to Kommersant. "The current situation looks better, since all the major players are interested in a diplomatic solution to the issue."

At the same time the slowing down of the negotiation process may have some positive effect on the Russian economy, as it means Iranian hydrocarbons will reach the world market later, says Baklitsky.

Will Cuba be removed from U.S. list of countries sponsoring terrorism?

U.S. President Barack Obama has sent a message to the U.S. Congress calling for the removal of Cuba from the State Sponsors of Terrorism List, the tabloid daily Moskovsky Komsomolets reports.

"The result of Obama's message to the U.S. parliament on this issue is not yet clear, due to great anti-Obama sentiment in Congress, which is controlled by Republicans in opposition to the Democrats," the editor-in-chief of the Latinskaya Amerika magazine, Vladimir Travkin, told the newspaper. "The American president's message will cause strong debates and criticism that will impede the adoption of the act by Congress."

According to Travkin, 50 years of sanctions, embargos, and struggle against the Cuban communist regime have failed to yield a result, so Barack Obama has made a proposal to start talks on restoring diplomatic relations with Havana.

"The Americans are interested in restoring relations with Cuba; there are many Cubans in the States," Travkin said. "American entrepreneurs are interested in trade with Cuba. Three states have already officially started trading with the Cubans, and their number will increase."