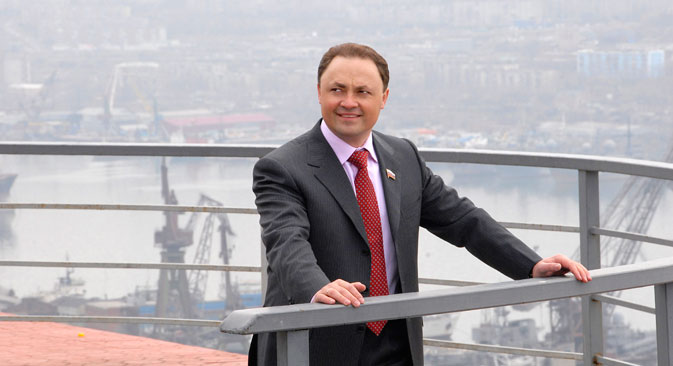 Vladivostok, the main city of the Russian region of Primorye, may obtain free port status this summer. In early April, Russian President Vladimir Putin urged officials to speed up the work on the free trade zone bill so that the law could be accepted in a few months. In an interview with Ogonyok magazine, the mayor of Vladivostok Igor Pushkarev reveals how it feels to wait for a miracle.

Ogonyok: How do you think the creation of a free port will affect Vladivostok?

Igor Pushkarev: By our preliminary – and very conservative – estimates, if the free port bill passes, by 2025 the city will lose 31 billion rubles [$580 million] and gain about 97 billion [$1.8 billion]. The losses will be a natural consequence of the incentives that are to be introduced. But the general growth of the region, stimulated by the arrival of new companies, will more than make up for this. For instance, we estimate that by 2034 the expenditures will be around 35 billion rubles while the revenues will exceed 500 billion rubles. According to our projections, the free port status will help the city to create more than 50,000 new jobs during the first five years.

Ogonyok: How will foreign businesses respond to the new status, in your opinion?

I.P.: We have held a special free port law hearing for foreigners. Among the visitors were the consuls general of China, India, Vietnam, South Korea, Japan and the United States. More than 40 of the participants were representing various companies – international, Korean, Chinese and Japanese.

As for the general mood, I would say they were interested – we've heard a lot of very specific questions and suggestions. For example, the audience got quite excited once we mentioned the project of a free port uniform tax to be paid by residents, amounting to 10 per cent of the difference between revenues and expenditures. The news about our plans to scrap visas for foreigners has also sparked interest.

Having communicated with foreigners a lot, I am aware that one of the major factors hampering the arrival of foreign companies to the city is our labor legislation. “With holidays and vacations combined, the Russians take a day off once every three days on the average,” the Japanese consul told me. “Besides, the payroll deductions are incredibly high – aside from the 13 percent income tax, 30 percent of the payroll is given away as various deductions.” But there is the catch: The residents of the free port will pay 7.6 percent in payroll deductions instead of 30 percent! This is a very significant outreach effort.

Ogonyok: You have made a very unusual suggestion: Invite the leading international clinics to become a part of the new free port. Where is the connection – a free port and foreign hospitals?

I.P.: Yes, we consider that a very important detail. You see, at the moment most of the money our citizens spend on healthcare leaves the country – they prefer to visit South Korea or Singapore if they need to undergo complicated treatment. In Primorye alone, 7.000 people sought treatment in South Korea in 2014. If we open the city's doors to state-of-the-art medical technology, we will not just halve the medical costs for those people by excluding the flight and accommodation expenses. We can give our people choice: get cheap healthcare conforming to the Russian medical standards, or pay much more to get help from South Korean doctors.

Since the decision will be made by people anyway, we think we will not do any harm to our healthcare system. On the contrary, this way we will be able to create the conditions for technological exchange, and our doctors will get the chance to improve their skills. And people will have the opportunity to save some money – there will be no need to go abroad; all the clinics will be here.

First published in Russian at Ogonyok.