Eurasian Union would make a good partner for ASEAN 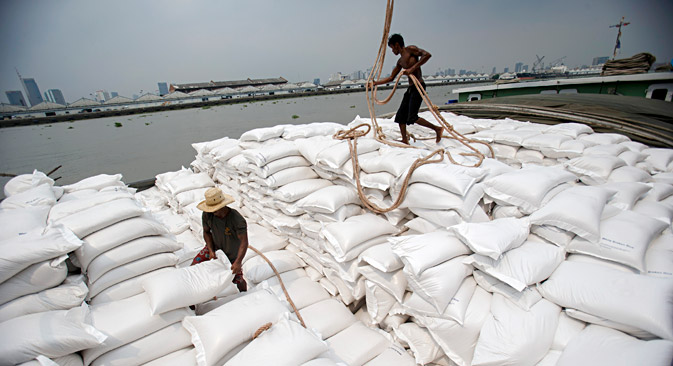 ASEAN countries would have a large market for their products in the Eurasian Union. Source: Reuters

The early completion of a free trade agreement between Vietnam and the Eurasian Economic Union could pave the way for greater economic engagement between the union and the ASEAN Economic Community.

Over the last few years, Russia has been proposing a common economic space between Lisbon and Vladivostok that would include the European Union and the Eurasian Economic Union (which comprises of Russia, Belarus, Armenia and Kazakhstan and came into effect on January 1, 2015). Geopolitical tensions in Ukraine have, however, thrown a spanner in the works and ensured that such a space is unlikely to become a reality anytime in the near future. However another large trading partner, the ASEAN Economic Community (AEC), which also comes into effect this year, could prove to be a long-term partner for the Eurasian Economic Union.

“The AEC’s blueprint calls for transforming ‘ASEAN into a region with free movement of goods, services, investment, skilled labour, and freer flow of capital,’ and this is similar to Vladimir Putin’s vision for the Eurasian Union,” says Alina Jorayeva, a business consultant from Kazakhstan working in Kuala Lumpur. “The two new economic blocs could even work on a long-term roadmap for a free trade area, if you look at the complementarities.”

She adds that the on-going negotiations between Vietnam and the Eurasian Economic Union are crucial in this respect. “Of course, negotiators from the Eurasian Union would be wary of products from the AEC making a backdoor entry through Vietnam,” Jorayeva says, adding that this could actually be slowing down the negotiations that began in the first quarter of 2013.

Vietnam is eager to finalize the negotiations with the Eurasian Union as it looks to increase its bilateral trade turnover with Russia, which stands at $2.7 billion.  At the 17th meeting of the Vietnam – Russia Intergovernmental Committee on Economic-Trade, Scientific-Technological Cooperation in August in Vladivostok, the sides agreed to conclude the talks for a free trade agreement by early 2015. Talks however could not be concluded to coincide with Russian Prime Minister Dmitry Medvedev’s visit to Vietnam this month.

“A pact between Vietnam and the Eurasian Union would open the doors for ASEAN,” Jorayeva says, adding that the blueprint would also have to be studied by AEC members to similarly ensure that products from the union do not escape existing ASEAN duties.

The idea of a free trade pact between AEC and the Eurasian Economic Union looks feasible considering that the members of the two areas are hardly competing in any areas.  The Eurasian Union is in a position to supply the AEC with oil and gas, automotives and spare parts, transport equipment and coal.

ASEAN countries are better placed to supply agricultural products and seafood.  Food supplies assume primary importance given the current standoff between Russia and the West that had led the former to ban various food products from countries that placed sanctions on Moscow over its alleged role in the Ukraine crisis. The AEC would also be able to export electronics, furniture and consumer durables to the Eurasian Economic Union.

“A free trade agreement in the future is very much possible between the AEC and the Eurasian Union but then ASEAN members may insist on an investment and services pact that would create conditions for easier labour movement,” says Ketan Jumani, a Manila-based labour consultant. “Countries like the Philippines have insisted on this provision in the agreement with Australia and New Zealand and resisted it with China and India, which are potential competitors,” he adds.

Jorayeva argues that a free trade agreement is workable even without a services and investment pact. “The market for food items, electronics and consumer durables is so large that this benefits ASEAN in a huge way,” she says. “There is also a strong possibility of Kyrgyzstan and Uzbekistan joining the Eurasian Union and this may be an obstacle to a services agreement since the labour force from these countries directly compete with people from poorer ASEAN countries.”

Even as it at the moment, the Eurasian Economic Union comprises of 20 million square kilometres of territory, a population of around 170 million and a total GDP of about $2.2 trillion. This presents a huge market for the AEC.

ASEAN already has free trade agreements in place with India, China, Japan, South Korea, Australia and New Zealand.  Besides Vietnam, the Eurasian Economic Union is looking at pacts with India and New Zealand, with a study group in place with the former for a potential agreement.  The first step for the Eurasian Union to have a free trade agreement with ASEAN would be to enter talks as a trade partner.

Analysts believe the Russian Far East could potentially become a major logistics and trans-shipment hub for products from the AEC destined for Central Russia and Europe. “It works both ways,” says Jumani. “Ports like Vladivostok could deliver LNG and oil from Siberia to ASEAN’s booming economies, and at the same time take in products that could be sent by rail to Europe.” This was in fact one of the main ideas behind Russia’s decision to host the 2012 APEC Summit in Vladivostok.

There is also the China factor, with the country being a direct competitor to ASEAN in many products such as consumer durables and electronics.   Since a free trade agreement between China and the Eurasian Economic Union is not on the cards at the moment, over resistance from Kazakhstan, preferential treatment for AEC products would undercut Beijing. “A sharp reduction in duties on the same items that China supplies and this cuts into their markets,” Jumani says.

There are areas of convergence for the Eurasian Economic Union, China and AEC, with infrastructure development standing out.  According to the Asian Development Bank, by 2020, ASEAN will need about $583 billion worth of investment in various forms for its infrastructure.  As China finance and builds some of the bridges, roads and power plants in the region, the Eurasian Union could ensure energy security for the AEC.

A partnership between the Eurasian Economic Union and the ASEAN Economic Community would bring Russia closer to its goal of reducing its dependence on Europe and integrating its economy with the emerging powerhouses of Asia.  A free trade area that stretches from Indonesia to St Petersburg would be unparalleled in size and dwarf any other such area both in size and population.