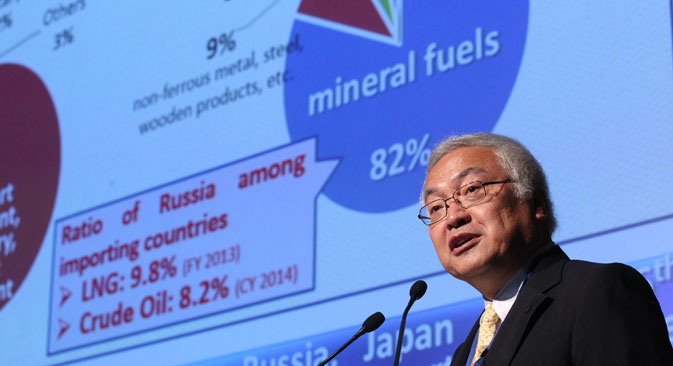 New opportunities for bilateral investment were the main theme of the third annual Russian–Japanese Forum on Cooperation in Business, Technology and Culture in Tokyo on May 21. RBTH looks at the main ideas shared at the event.

According to Norio Sasaki, Chairman of the Federation of Economic Organizations of Japan (Nippon Keidanren), Japanese businesses are increasingly interested in the Russian Far East. 58 percent of companies in Japan described it as a promising region.  Over the last year, 91 percent of  the total direct investment from Japan to Russia (around $10 billion) went to the Far East. 140 Japanese companies are already operating in the region.

“Japanese companies still desire to invest in the Russian market,” Sasaki said, adding that there weren’t many Russian direct investments in Japan.  He believes one of the promising areas could be the development of R&D. “This is beneficial for many reasons, including the fact that Japan has some of the highest levels of protection of intellectual property,” Sasaki added.

“There are almost no Russian companies in Japan indeed,” said Vitaly Shvydko, head of Sector Section for Japanese Economics and Politics Studies of the Institute of World Economy and International Relations at the Russian Academy of Sciences. “About 90 percent of the investment is on the Japanese side. This is largely due to the structure of trade. Russia limits itself mostly to energy supplies. In addition, there is a complex regulatory environment in Japan.”

According to Dzmitry Tsetserukou, Director of Intelligent Space Robotics Laboratory, Skoltech, there are strong prospects for cooperation in science and technology. He believes robotics could become one of the areas of cooperation.

“Russian scientists, known for their developments in the field of artificial intelligence, could work with advanced robots created in Japan,” Tsetserukou said.

The idea of a special economic zone for Japanese investors who want to work in Russia, was also put forward, according to Sergei Kachayev, deputy head of the Ministry for the Development of the Russian Far East.

“We are considering a new format of cooperation, where foreign companies can serve as operators of priority development territories (PDT). This proposal is currently under discussion,” the ministry said in a press note.

Currently, three PDTs were approved in the Far East. Japanese companies are involved in two PDT projects in Khabarovsk. Sojitz will build an international terminal at the Khabarovsk airport and JGC is looking to create a greenhouse complex.

“The expansion of Japanese companies into the Russian agricultural industry is a new trend,” Vitaly Shvydko said. “Japan is very advanced when it comes to innovation in the field of agriculture. It is interesting for them to introduce the technology for more efficient and cheaper food in Russia."

Russia offers an untapped market for Japanese agricutural innovation, and there are opportunities for large-scale commerical farming,  according to Shvydko.

Urban infrastructure was named as another promising area for cooperation. Japanese companies have proposed to improve conditions in megacities such as Moscow, by fighting congestion, reducing greenhouse gas emissions and optimizing energy consumption.