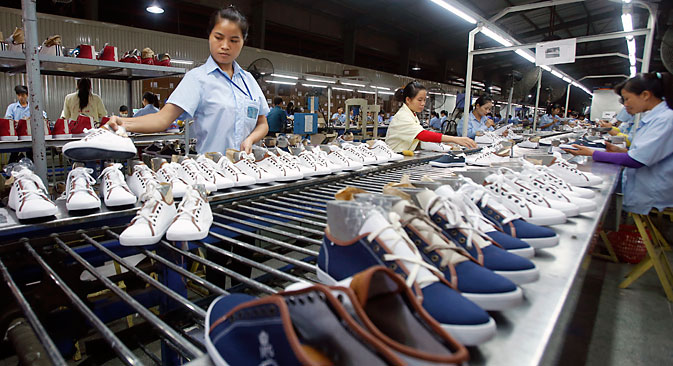 Bangladesh and Vietnam are on the list of seven largest apparel exporters to Russia. Source: Reuters

The Russian clothing and footwear market has been witnessing negative growth since 2014, forcing many European brands to close their stores and exit the market. This, along with China losing its position as the world’s leading garments manufacturer, opens Russia for exports from Vietnam, Bangladesh and other Asian countries.

Since 2014, many international clothing brands have left the Russian market, including Italy’s OVS, British New Look and River Island, and Germany and Hong Kong headquartered Esprit. Experts predict a new wave of exits in September-October.

The Asian garment manufacturing industry is undergoing a certain kind of segmentation, according to experts. China’s position as world’s number one destination for cheap textiles has been shaken by emerging Asian counties such as India, Bangladesh, Vietnam, Thailand, and Indonesia.

There are two major factors that make garment imports to Russia from these countries more competitive than from China, - the prices and the lower import duties imposed by the Russian government.

“Speaking of import growth in 2013-14, one may see an obvious trend. The negative dynamics of China, Italy and Turkey and growing figures for Vietnam, India and Bangladesh,” Anna Lebsak-Kleimans, CEO Fashion Consulting Group, says.

Bangladesh and Vietnam are on the list of seven largest apparel exporters to Russia, according to Consulting Group data. Although their shares are not as big as China’s, the growth is more impressive. In 2012-14, imports from Bangladesh grew at 25.59 percent and Vietnam at 16.96 per cent while imports from China fell by 4.48 percent.

Anna Lebsak-Kleimans notes that Asian countries, mainly China, account for about 75-80 percent of counterfeit garment and footwear imports in Russia (the so-called “grey import”). At the same time, the size of this segment has reduced significantly since 2000 when it was estimated at about 80 percent of total sales, Lebsak-Kleimans says. In 2014, it accounted for not more than 25 percent. The segment affected by counterfeit goods is mostly bags and accessories, sportswear and shoes (Adidas, Nike, and others).

Vietnam at the forefront

According to the Vietnam National Textile and Garment Group (Vinatex), the European Union will continue to be Vietnam’s major market in the coming years. However, with Moscow no longer levying high tariffs on Vietnamese apparel products, its exports to Russia will increase.

Last week, Vietnam signed a free trade agreement with the Eurasian Economic Union (EAEU) comprising Russia, Belarus, Armenia, Kazakhstan and Kyrgyzstan. This is likely to boost apparel exports from Vietnam to the EAEU.

“Implementation of the agreement will boost bilateral trade and promote trade and economic ties between its participants, it will also solve the problem of involving the EAEU in integration processes in the Asia-Pacific region,” a Russian government press statement said.

Russian authorities expect this agreement to become a model for Russia’s further integration with other members of the ASEAN trade bloc.

“Creating a free trade zone will benefit Vietnam whose export-oriented economy has been already showing good growth rates since 2011. It will provide Vietnam with some logistic advantages over its Asian peers, for example Bangladesh,” Anna Lebsak-Kleimans says. At the same time, she adds, the emergence of a new “low-cost” provider of finished garment products will further complicate the task of bringing industrial enterprises back from Asia to Russia.

“The share of imports in clothing, footwear and accessories segment is more than 80 percent. The fall in local garment manufacturing has been continuing for the last 20 years and it is very difficult to reverse it,” she says.

There are 653 large and medium enterprises and about 4,000 small companies in Russia engaged in the garments and textile industry, according to government statistics. The industry has been on a slow but steady path of revival since the crisis of 2009.

According to Souzlegprom (Russian Union of Entrepreneurs of Textile and Light Industry), domestic manufacturers benefit from Russia's Light Industry Development Strategy, which provides state support for textile and garments manufacturers, including modernization of technological base and enhancing their competitiveness, among other measures. Last year, the Russian government banned using imported textiles for manufacturing of military uniforms, leisurewear, underwear, bedclothes, hats, socks, pillows and shoes.

However, Anna Lebsak-Kleimans says, at present Russian manufacturers have only one advantage –geographic location. The government support reaches only large factories and is limited to placing government orders mostly for defense and industrial uniforms.

BTK Group, one of Russia’s largest producers of men’s apparel and uniforms, has a $1.5 billion contract with the Russian Ministry of Defense for army uniform manufacturing, and has been recently included in the list of 199 enterprises approved by the anti-crisis Commission of the Government of the Russian Federation.

BTK Group spokesperson believes that in the current economic environment, Russia can compete with Southeast Asian counties in terms of salaries in the garment sector. “The wages there have been increasing by 20 percent yearly since 2006 and reached $650 a month currently,” he says adding that Russia’s geographic proximity to CIS and Eastern Europe markets gives local manufacturers extra advantages.

At the same time, he adds, the high level of local manufacturers’ dependence on imported raw materials and machinery remains a major challenge.

Olga Strelnikova adds that although local manufacturers benefited from exchange rates fluctuations that made their prices extremely competitive, the lack of variety of materials and technologies, when compared to what Southeast Asian countries can offer, remains the main problem for Russian manufacturers.

Strelnikova says the ruble’s sharp drop against the dollar last year and the following period of recession and uncertainty caused many Russian brands to revise their manufacturing strategy. “Many companies prefer not taking any risks in binding themselves by external contracts implying payment in dollars because they could not predict the final price of the products since the manufacturing cycle is at least 6 months long, sometimes more.”

However, she adds, more Russian brands now opt for combined production. They purchase fabrics and accessories abroad and sew in Russia where the cost of sewing is cheaper. Strelnikova adds that since consumers value not only cheap prices, but also overall impression and quality of the apparel, factors like modern materials and new processing technologies become important. This is the area where Russian manufacturers cannot compete at the moment.