Gazprom eager to supply gas to China, Japan and India 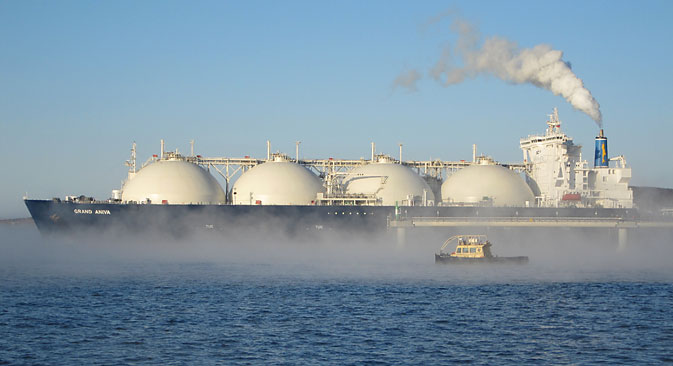 Japan may get more LNG from Sakhalin-2. Source: Alexander Semenov/TASS

Analysts say the Asia-Pacific region will remain the key market for liquefied natural gas over the next decade. The Russian gas major is eager to tap into the growing energy demand from Asia’s largest economies.

A senior Gazprom official said the gas major was exploring ways to increase supplies and shift its main focus to China, Japan and India.

Vice Chairman of the Board of Gazprom, Alexander Medvedev made several key statements during a press conference on June 16 suggesting a reorientation of supplies to markets in the Asia-Pacific region.

Gazprom's resource base is sufficient to meet Chinese gas demand, which is estimated to be around 100 billion cubic meters annually, Medvedev said at the press conference, according to Vedomosti. “That’s a conservative forecast,” he stressed.

Gazprom expects to sign the documents on the price of gas supplies to China via the Western Route, by which it plans to supply 30 billion cubic meters per year. Gazprom and CNPC signed an agreement on the supply via this route in May 2015. A year earlier, a 30-year contract was signed on gas supplies to China via the Eastern Line, through the Power of Siberia pipeline.

Medvedev said Asia’s third largest economy was also of great interest to the company. “We consider India as very promising,” Medvedev said. He added that Gazprom contracted volumes of LNG for deliveries to India, and the company sees great potential in this direction.

Earlier this month, Russian Energy Minister Alexander Novak spoke about the possibility of implementing a project to build a pipeline to supply gas to India.

According to Medvedev, Gazprom expects Japan to be one of the target markets for liquefied natural gas (LNG) supplies, RIA Novosti reports.

Gazprom is building today two plants in the Russian Far East, which geographically simplify the supply of LNG to the Asia-Pacific region (Vladivostok LNG and the third phase of the Sakhalin-2 plant), and considers the prospects for increasing exports to Japan.

Despite its positive plans for Asia, the Russian giant is going through difficult times. The company’s net profit fell by 11 percent in the first quarter of 2015, while exports to Europe fell by almost 20 percent in the same period, reaching the lowest level in the past six years, according to Kommersant.

Huge prospects in the Asia-Pacific region

Analysts say the Asia-Pacific region will remain the leader in the consumption of LNG for the next decade.

According to Ernst & Young estimates, the global demand for LNG will nearly double by 2030, reaching about 500 million tons a year, of which the Asian region will account for two-thirds.

If the main consumer is now developed Asia-Pacific countries, such as Japan and South Korea, it is countries like China, India, Pakistan and Vietnam that will ensure future growth.  Current LNG producers such as Indonesia and Malaysia will become gas importers in the near future, the Ernst & Young report said.

Gazprom: China starts building its part of the Power of Siberia pipeline