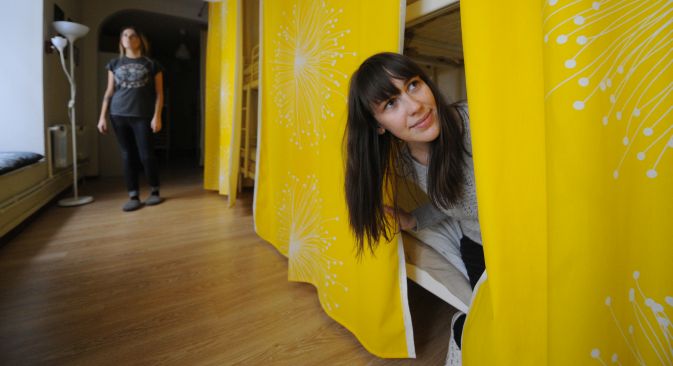 Hostels and high-end hotels alike are benefiting from the decline in the ruble, as Russians stay home and tourists from Asia move west. Source: Mudrats Alexandra / ITAR-TASS

Although traditionally business travelers made up most of the clientele in Russian hotels, today luxury chains and hostels alike are seeing a new kind of client.

While the geopolitical situation and sanctions banning firms in a number of industries from doing business in Russia have caused a precipitous drop in the number of business travelers, the dismal economic situation has actually helped fill hotel rooms on both the high and low ends of the market.

Traditionally, Russian hotels have filled most of their rooms with business travelers rather than tourists. Today, however, this market segment has almost completely disappeared. Businesspeople are being replaced with leisure travelers — primarily from Asia — who are taking advantage of the cheap ruble to visit Russia and domestic tourists for whom the value of the local currency has made a vacation abroad prohibitively expensive.

“Due to the decline in foreign business trips to Russia, Moscow hotels are turning today to tourist groups from China, Korea and India,” said David Jenkins, head of the hospitality department of the consulting company Jones Lang LaSalle.

Carlson Rezidor, Russia’s largest international hotel operator, which manages 31 hotels under the brands Radisson Blu and Park Inn by Radisson, confirms the shift of tourist flows to Asia, particularly China. “There is also a considerable interest on the part of tourists from Turkey and India. At the same time, some of our hotels maintain a sufficiently high proportion of tourists from Germany,” Carlson Rezidor P.R. and Communications regional manager Irina Zakharova said.

According to the Department of Tourism of the Primorsky Territory in Russia’s Far East, the number of tourists from China arriving in the regional capital Vladivostok increased by 140 percent in the first three months of 2015 compared to the same period last year.

The change in clientele is being felt in the luxury hotel segment as well as in hostels.

The P.R. department of the The Ritz-Carlton, Moscow, said: “We are seeing a slight drop in [the number of tourists from] Western Europe, the U.S. market declined more strongly, but there is the influx of visitors from China, India, the Middle East and Latin America.”

Anna Borovikova, the owner of two Moscow hostels, the 3 Penguins and Chocolate, estimates that the number of Chinese guests at her hostels has doubled in the past year while the number of Germans has dropped by almost 20 percent and the number of nights booked by French and American visitors fell by 25 and 30 percent, respectively.

Higher-end hotels in Russia are seeing their occupancy rates increase as visitors realize that their local currency goes farther in Russia. “Guests can now stop not at the Holiday Inn, but at Intercontinental, not at the Courtyard, but at Marriott, and so forth,” Jenkins said. International real estate consulting firm Cushman & Wakefield marked an increase in the return per room in luxury segment hotels in Russia of 10 percent in the first quarter of 2015.

Representatives of foreign hotel operators prefer not to comment on how the political and economic situation in Russia affects their plans for business development. Hilton Worldwide said it was acting with caution.

But Marina Smirnova, a partner with Cushman & Wakefield, said that hoteliers are moving ahead with plans to open properties in Russia’s regions. For example, a Hampton by Hilton hotel and a Hilton Garden Inn have both recently opened in the Urals city of Ufa. Smirnova attributed these projects to the increase in domestic tourism: “Foreign demand is relevant only for filling Moscow, St. Petersburg and Vladivostok, while the remaining 92–95 percent are supported by domestic tourism.”

Domestic tourists are also key to the growth of hostels in Russia, which charge as little as 500 rubles ($9) a night, even in the center of Moscow. “If two or three years ago about half of the guests were foreigners, today they make up no more than 10 percent,” said Andrei, the manager of the Columb Hostel in Moscow.

Hostel owners hope to benefit from increase in domestic tourism