Putin: Russian economy has stabilized, now time to focus on the future 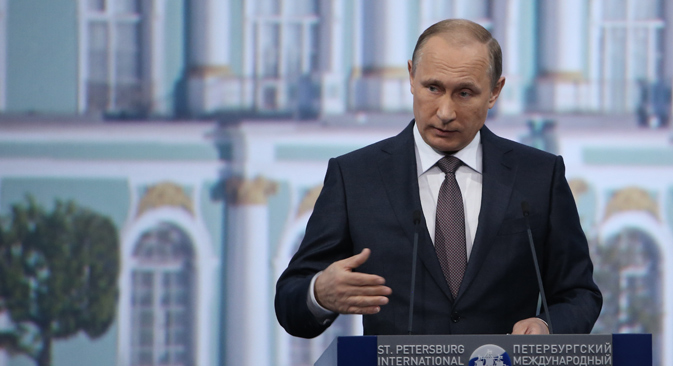 Russian President Vladimir Putin has said that Russia's economy has stabilized, despite the ongoing sanctions and low oil prices. In a speech at the St. Petersburg International Economic Forum, Putin identified the government’s primary focus for the future as collaboration with the Pacific Region countries and the creation of more competitive enterprises.

Russia's economy has stabilized despite ongoing sanctions and low oil prices, according to President Vladimir Putin. Speaking at the annual St. Petersburg International Economic Forum, the Russian leader was bullish about the country’s economic prospects.

"Back in 2014 everyone predicted we would have a deep crisis, but this didn’t happen,” said Putin. “We have stabilized the situation and are confidently traversing this difficult period."

According to Putin, the Russian economy has preserved its balance of strength: "We have a stable budget; our banking system has adapted to the new conditions; we have been able to stabilize the exchange rate and maintain our reserves,” he said.

Putin underlined that the government had chosen not to impose any restrictions on the movement of capital, just as in 2009, when the country was emerging from its previous economic crisis.

"We are responding to the external restrictions not with the closure of our economy but by increasing its openness," he said.

At the same time the holdings of sovereign funds have been maintained at practically the same level: The volume of the reserve fund is $76.25 billion and that of the national wealth fund is $75.86 billion.

Putin was keen to paint the sanctions in a positive light, saying that the economic restrictions had given the country the necessary impetus to develop domestic production.

"The introduction of the so-called sanctions has stimulated our import substitution work and this has enormous potential for the petrochemical, light and processing industries, as well as pharmaceuticals," he said.

He remarked that the essence of the import substitution program is not in closing Russia's market but in learning to produce quality products and to efficiently use opportunities for internal development.

"The map of global economic development is changing: The Pacific Rim and ASEAN countries already make up a fourth of the world economy and will constitute the biggest demand for goods and services," said Putin.

In his view, the strengthening of work with Pacific Rim governments is a necessary condition for developing the Far East, and already now the region is forming advanced development territories that have an entire complex of preferences, relying mainly on Asian investors.

However, Putin said that active interaction with new centers of global growth does not necessarily mean that Russia will pay less attention to its traditional partners.

"We wish to collaborate with anyone who is ready to work on equal terms. Russia is open to any interactivity, to any dialogue that responds to mutual interests," he said.

Putin said that the steps taken by the government to limit the damage to the economy over the last year had been a success and that the Kremlin was now looking to implement a longer-term strategy.

"The operational measures that supported the economy and the financial system have worked and now we will concentrate on the agenda of long-term development," he announced, adding that Russia has already fixed the tax rates for the next four years in order to enable this.

According to Putin, the Russian government will also increase the transparency of Russian companies, saying that in order to be competitive it was essential to “constantly move forward” and “understand how effectively the adopted measures are working.”

During his speech the Russian president listed several reforms that will be launched in Russia in the near future. First of all, one of Russia's largest universities will serve as a foundation for a center for the development of new management strategies.

Secondly, all Russian regions will have project offices that will be occupied with enhancing the conditions for the development of business. Thirdly, the Russian government will carry out a vast industrial expansion.

As part of this strategy, from 2019 onward firms will be obliged to introduce the best possible technologies. "As a result Russian companies will hold leading positions in sectors that will determine the future," said Putin.

VIDEO: How will the crisis affect the Russian economy?