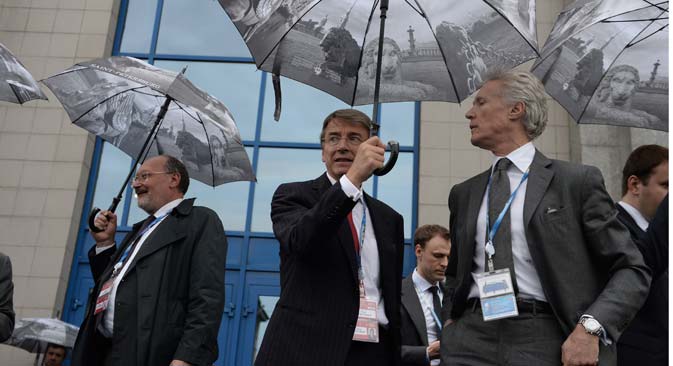 Russia's Asian Pivot is as much about economics as it is about politics. Although trade and investments between Russia and ASEAN countries are well below potential, there are several important projects in the pipeline.

The 15th St Petersburg International Economic Forum (SPIEF), which was held last week, had a strong Asian flavor. Analysts say this is a clear sign that businesses from the continent are reacting positively to Russia’s overtures. Addressing SPIEF delegates last week, Vladimir Putin noted that cooperation with China, Japan, South Korea and ASEAN countries is one of Russia's priorities.

Alexey Volostnov, Business Development Director, Russia, at Frost & Sullivan, says Russia is increasing its efforts in establishing meaningful cooperation with APEC countries, where investment potential is quite high. He believes Russia’s trade with members of the grouping may double in the next few years.

Analysts point out that while China, India, Japan and South Korea are already on Russia's investment map, ASEAN countries lag behind.

The fact that Myanmar Vice President U Nyan Tun was given a slot in the keynote plenary address at the SPIEF alongside President Putin surprised many visitors to the forum. Analysts say there were economic reasons behind such a move.

Victor Tarusin, executive director, Russia-ASEAN Business Council, says Myanmar, which is now deeply influenced by the United States, is a country to “be friends with.” There are several Russia-Myanmar joint projects in gold mining, while Russia’s Bashneft and Myanmar’s Nobel Oil have a project in oil and gas exploration.

According to the 2014 Global Investment Trends report by UNCTAD, FDI flows to Russia fell by 70 percent to an estimated $19 billion. Most FDI flows (both inwards and outwards) in Russia go through offshore financial centers, particularly Cyprus, the British Virgin Islands and Luxembourg.

Vietnam stands out among its Southeast Asian neighbors in terms of both trade volumes and mutual investments with Russia. The major investments are in the oil and gas sector, through joint ventures between Vietnam Oil and Gas Group (Petrovietnam) with Russia's Zarubezhneft and Gazpromneft.

Vladimir Mazirin, director of the Vietnam and ASEAN Center at the Russian Academy of Sciences, points out that investments in Russia are attractive for Vietnam today since they offer very high rates of return. “Vietnam is ready to expand its investment in the oil and gas sector as its economy is growing rapidly and its energy resources are not enough,” Mazirin says. He adds that currently oil and gas projects account for up to 90 percent of Vietnam's investments in Russia, while cooperation in other sectors as well as involvement of private business is negligible.

The first steps to diversify trade and investments have already been taken. A deal was signed between the Ho Chi Minh City and Moscow administrations in May to establish a Vietnamese industrial corridor in the Moscow region. Under this agreement, Vietnamese companies will process seafood, manufacture garments and set up other small scale units in the cluster and Russia will provide land, infrastructure, incentives and work permits.

Analysts say the free trade agreement between Vietnam and the Eurasian Economic Union will motivate investors and give rise to new preferential policies for important investment projects, although the real effect of it will only be seen in the distant future. Mazirin believes if all projects discussed between countries recently are realized, Vietnamese investments in Russia, currently estimated at $2.5 billion, will double in the next two years.

While Russian small investments in Thailand are limited mainly to tourism, jewelry manufacturing and IT, Thailand has been active in Russia's agriculture sector for a decade. Thai food manufacturer Charoen Pokphand Foods invested in various regions in Russia. In the Moscow Region, the group built a high-tech animal fodder mill. It also invested in a pork farm and other projects in food manufacturing and retail.

Indonesia is also increasing economic cooperation with Russia. Bilateral trade between Russia and Indonesia, which was estimated at about $3.4 billion in 2013, has increased by about 30 percent since then. Russia and Indonesia are implementing two joint investment projects: the construction of a special-purpose road that can be used for transporting coal and other cargoes in Eastern Kalimantan province and an aluminum refinery. Each project is valued at over $2 billion.

In Malaysia, apart from active cooperation in defense, there is activity in the gas sector, electronic appliances and equipment, and IT technologies. According to Malaysia's Ministry of International Trade and Industry, bilateral trade with Russia in 2014 touched $3.3 billion. A delegation of more than 30 businessmen from Russia headed by Russian Minister of Economic Development Aleksey Ulyukayev will visit Malaysia in August.

Russia's largest antivirus security software company Kaspersky Lab, today an international holding registered in the UK, operates across Southeast Asia with offices in Indonesia, Malaysia and Thailand. IT-security group InfoWatch managed by Natalya Kaspersky, co-founder of Kaspersky Lab and ex-wife of Eugene Kaspersky, is actively expanding in the Southeast Asian market starting with Malaysia and Vietnam where it works with local partners.

Analysts agree that two-way investment cooperation between Russia and the emerging economies of Asia will continue to grow over the next few years.

Putin: Russian economy has stabilized, now time to focus on the future

Eurasian Union would make a good partner for ASEAN