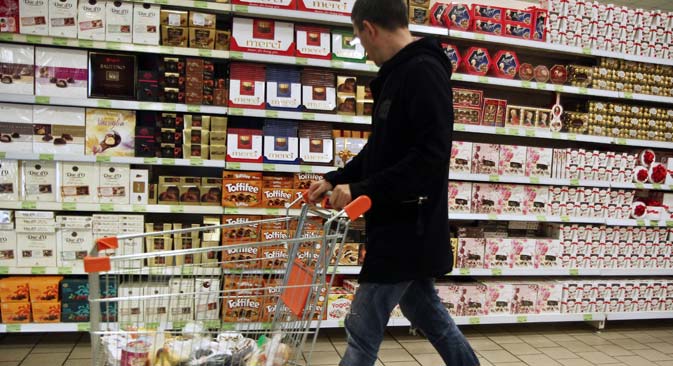 Despite Russian Minister of Agriculture Alexander Tkachev’s recent announcement that the ministry was introducing a ban on confectionery to Russia as part of the extension of the food embargo, these items do not feature on the list of banned goods. Source: AFP/East News

Just two days after European Council ministers agreed to extend sanctions against Russia over its role in the Ukraine crisis by six months, Moscow has declared that its retaliatory ban on Western food imports is to remain in place for another full year. Experts say that despite the damage to business, the sanctions are unlikely to be lifted until next year, and possibly even until 2017.

The crisis between Russia and the EU has deepened further with the announcement that Russian President Vladimir Putin has signed a decree extending the ban on Western food imports by a full year in response to the extension of European sanctions against Russia over its role in the Ukraine crisis.

“We are extending our retaliatory measures by one year beginning from today," news agency RIA Novosti reported Putin as saying on June 24. He added that he hoped the measures, which forbid the import of goods from the United States, the European Union, Canada, Australia and Norway, would contribute to the development of Russia’s agricultural and food industry.

Despite Russian Minister of Agriculture Alexander Tkachev’s recent announcement in an interview on the Rossiya 24 TV channel that the ministry was introducing a ban on confectionery to Russia and was proposing to review the possibility of banning the import of flowers to Russia as part of the extension of the food embargo, these items do not feature on the list of banned goods.

However, a number of new types of foods have been added to the list of agricultural products, raw material and food whose export to Russia is currently banned, including lactose-free dairy products, baby trout and oyster and mussel spat.

The move by the Kremlin comes in reply to the decision by European Council foreign ministerson June 22 to extend the period of economic sanctions against Russia "with the aim of fully implementing the Minsk agreements."

Shortly afterwards Russian Prime Minister Dmitry Medvedev appealed to President Vladimir Putin with a proposal to prolong Russia's countersanctions against the EU and ordered the preparation of government regulations with a list of banned goods.

Timur Nigmatullin, an analyst at investment holding Finam, said that the EU had decided to extend its sanctions for another half year as a result of the escalation in eastern Ukraine in the last months. According to Nigmatullin, Russia's extension of the food embargo was an expected measure, from both the political and the economic viewpoints.

Commenting on the influence that Russia's countersanctions have on the Russian economy, Nigmatullin remarked that, according to the Ministry of Economic Development, one of the main reasons for the high inflation in the recent quarters is the devaluation of the ruble and not the embargo. "Only about two percent of the inflation is the effect of Russia's countersanctions," he explained.

Konstantin Korischenko, deputy dean of the Stock Market and Finance Engineering department at the Russian Presidential Academy of National Economy and Public Administration, believes that the current situation is economically disadvantageous for both sides: "The sanctions substantially (sometimes by dozens of percent) reduce the EU's commodity turnover with Russia and prevent Europe from coming out of recession," he said.

The friction with the West, according to Korischenko, has also reduced the quality of the Russian citizen's consumer options, made it difficult to receive financing in western capital markets and limited Russia's access to high technology. "The negative effect can also be noticed in the growth of government participation in business," he added.

However, in Korischenko's view, the sanctions are also having a positive effect on the Russian economy: "Import substitution and the system of domestic refinancing are developing, as well as the reactivation of the 'eastern ties’,” he said.

No use waiting for cancelation of sanctions

There have also been calls for a differential approach toward European countries. "We must take into account the positions of countries such as Hungary, Greece and Cyprus, with which we have not only good trade and economic relations, but also good political relations," said Valentina Matviyenko, speaker of the Federation Council, Russia’s upper house of parliament. "These countries have actively spoken out against the sanctions. They must be supported."

According to Timur Nigmatullin, the depth of the geopolitical crisis provoked by the events in Ukraine makes it unlikely that the sanctions will be canceled in the foreseeable future and consequently prevents analysts from building any macroeconomic predictions.

Meanwhile, Konstantin Korischenko is convinced that, despite the economic repercussions, the sanctions will remain in effect at least until the end of 2016, and possibly until the middle of 2017.

"Presidential elections will take place in the U.S. in 2016 and parliamentary elections in Germany in 2017. It is clear that, with the negative image that the mass media is constantly assigning to Russia, hawkish candidates will end up in a more advantageous position than doves,” he said.“And it will be the new leaders of the U.S. and Germany that will have to figure out how to solve the problem." 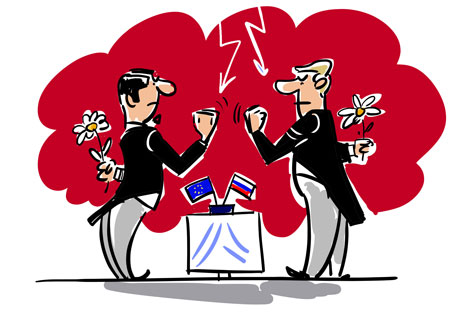