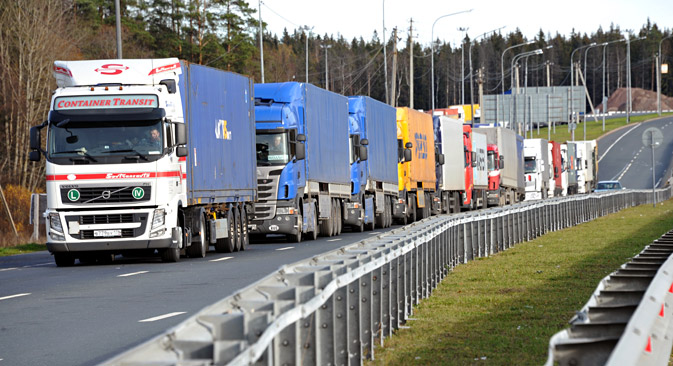 Russia is to introduce a new system for collecting tolls from heavy trucks, with the proceeds – some 50 billion rubles ($896 million) a year – to go toward vital road repairs. Payment will be controlled by special gates set up on major highways.

Help may be at hand for Russia’s long-suffering roads in the form of a new initiative that aims to offset the damage done by heavy trucks by charging hauliers a fee that will go toward maintaining major highways.

The new system, called Platon (derived from the Russian for “pay per ton”), will be launched in November 2015 and will levy charges on trucks over 12 tons.

Given the tariff set by the government, during the first year the new system is expected to raise 50 billion rubles ($896 million). The money will be transferred to the federal road fund to be used for road repairs.

According to Alexander Sovetnikov, the managing director of the company operating the new system, hauliers will be able to make payments via dedicated terminals, the system website (which has an English-language version) or by visiting the office.

Sovetnikov explained that in Russia, just as in the European Union, toll payment and routes will be controlled through special “gates” set up on federal highways (there are plans to install some 480 stationary gates and about 100 mobile ones), with operators monitoring truck movement with the use of dedicated onboard devices, two million of which will be distributed to drivers free of charge. .

“We have engaged Western consultants, for example the Sky Toll company, which launched a similar system in Slovakia,” said Sovetnikov.

At the same time, he added, in the Russian system the main emphasis was made on domestic industrial capabilities: For instance, the onboard device necessary to record payment was developed and manufactured in Russia.

A small price to pay

Despite the vast sums earned by Russia over the past 15 years from oil and gas exports, the country’s road network remains chronically underdeveloped, with even the road connecting Moscow and St. Petersburg still two-lane for much of its length. The poor quality of existing highways and a lack of investment mean that road surfaces quickly deteriorate under heavy usage from trucks.

According to the Russian federal agency operating motorways, Rosavtodor, up to 58 percent of damage done to the roads in the country is caused by trucks weighing over 12 tons. Given their total annual mileage on federal highways, the optimum tariff was calculated at 3.73 rubles ($0.068) per kilometer.

“This fee is about half of what is charged in other countries, so the economic effect on hauliers will be practically nil. At most, it will add 1 percent to the cost of the transported goods,” Rosavtodor head Roman Starovoyt told RBTH.

According to the federal road agency, the annual cargo traffic in Russia is about 5 billion tons, and the annual damage caused to the roads is estimated at 180 billion rubles ($3.16 billion).

Ivan Varlamov, director for strategic development of the PEK transport company, estimates that the introduction of the new payment may push hauliers’ costs up 10 percent, which will add 1-3 percent to the cost of transported goods.

However, Alexander Dyakonov, head of the Fresh division at the FM Logistic company, said that the moderate amount of the fee “will not have a big effect on the cost of transportation.”

“It is another thing if the tariffs are differentiated, as was done in Belarus, with different tariffs used for residents and non-residents,” he said.

The issue of transit

According to official figures, transit accounts for about 5 percent of road traffic in Russia, whereas in neighboring Belarus the figure is nearly 20 percent. Both in Russia and Belarus, the bulk of transit comes from EU countries.

“Of course, the new system will create a certain inconvenience for foreign hauliers. However, the final price of the issue is unlikely to be high enough for them to give up the transit route via Russian territory or to look for alternative routes,” said Alexei Kichatov, managing director of the City Express delivery company.