The extension of U.S. sanctions against Russia on July 30 will first and foremost lead to the strengthening of import substitution, say Russian analysts. However, with the blacklist now expanded to include branch companies of the country's main development institute, Vnesheconombank, and Russia's largest oil company, Rosneft, the realization of large infrastructure projects may seriously be affected.

The extension of U.S. sanctions against Russian companies and individuals will first and foremost lead to the strengthening of import substitution, say Russian experts.

The American government once again expanded the scope of the sanctions against Russia on July 30, imposing restrictive measures against 11 individuals and 15 legal entities supposedly involved in schemes aimed at bypassing the earlier sanctions, introduced gradually since March 2014 to punish Russia for its role in the Ukrainian crisis.

Rotenberg's son Roman has also been included on the list, along with the Finnish company Langvik Capital, whose properties include a small hotel near Helsinki called Langvik. According to Finnish media, this hotel is supposedly owned by the Rotenberg family.

Finnish businessman Kai Paananen also appears on the list "for his material support to Mr. Timchenko" and to a series of companies owned by the Russian.

American companies are forbidden from doing any kind of business with members of the blacklist, whose assets on U.S. territory will be frozen.

Konstantin Korischenko, deputy director of the Department of Capital Markets and Financial Engineering at the Russian Presidential Academy of National Economy and Public Administration, described the extension of the sanctions list as “more of a political move rather than economic,” speculating that the decision may be related to Russia’s recent blocking of a UN Security Council resolution on creating a tribunal to try those responsible for the shooting down of Malaysian Airlines Flight MH17 in July 2014.

The American government believes that the Russian companies that were earlier placed on the U.S. blacklist are using their subsidiaries to bypass the sanctions, so subsidiaries belonging to Rosneft and Vnesheconombank, including the bank’s VEB Capital subdivision, have been placed on the list.

VEB Capital is one of the investors in the construction of the Turkish Stream gas pipeline in Greece. The project presupposes the laying of a pipeline along the Black Sea seabed from Russia to a distribution hub in Turkey and then to the countries of southern Europe.

The list also includes the Russian Foundation of Direct Investments, an organization that actively sponsors the construction of infrastructure projects. Recently, the foundation signed an agreement with the Saudi Arabian General Investment Authority.

Russian experts believe that the blacklisted companies may experience problems with payments in American currency.

"The United States’ decision is a logical part of the latest events of the sanctions war being fought by the two countries, which is why we can't call it unexpected," said Anton Soroko, chief analyst at the Finam investment holding. "It should not have a big influence on the Russian economy."

According to Soroko, the introduction of new sanctions demonstrates the lack of improvement in bilateral relations, although it had already been taken into consideration by the market.

Furthermore, according to Konstantin Korischenko, the sanctions, which make western resources and technologies inaccessible for Russian companies and banks, "render a service" for Russia since they force the country to make difficult decisions.

"This means the 'pivot towards the east' and an active search for import substitution. These processes have a very negative effect on the current Russian economy, but in the mid-term they may serve to inspire the realization of structural reforms in the country," said Korischenko. 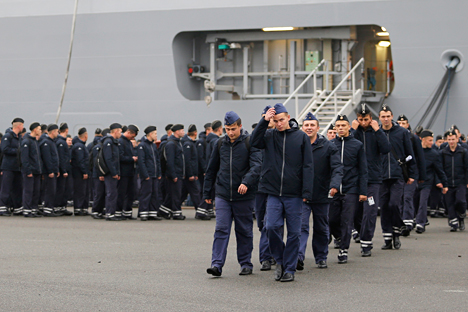