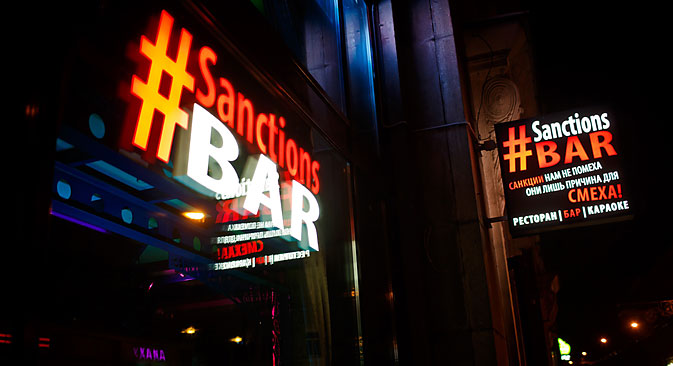 A Moscow bar called Sanctions is making the most of a bad situation. Source: PhotoXPress

Russia, already facing recession and falling oil prices, prepares for the possibility that Western sanctions may remain in place for years to come.

Russia is girding itself for the possibility of a long haul under Western economic sanctions, as officials in Moscow warn that they see no near-term end to the campaign of economic punishment that the International Monetary Fund has said could shave off almost a tenth of Russia’s economy.

A year and a half after the U.S. and European Union launched an effort to punish Russia over its role in the Ukrainian dispute, about 150 individuals have been targeted with travel bans and asset freezes, while dozens of Russia’s biggest banks and energy firms have been cut off from access to Western finance.

Russia has retaliated by banning imports of U.S. and European food products, a blow that fell especially hard on European farmers. Albert Jan Maat, president of the European farmers group Copa, told the Reuters news agency that sanctions against Russia had led to the loss of about 5.5 billion euros’ worth of agricultural exports last year.

Yet as the dispute drags on and the economic damage piles up, observers said there seems to be no end to the standoff in sight.

“It looks as though the country is gradually adjusting to a new old reality: life under permanent sanctions, as it was in the Soviet Union,” bemoaned economists at Russia’s largest savings bank, Sberbank, itself a target of sanctions, in an analysis published this month.

The E.U. and U.S. initially imposed measures against Russia in March 2014, following the annexation of the Ukrainian region of Crimea. Western countries also accuse Russia of continuing to support Ukrainian separatist militants, a charge Russia has repeatedly denied.

“We should proceed from the premise that sanctions will last for a long time,” Russian Deputy Foreign Minister Sergei Ryabkov told journalists during a visit to the Russian city of Nizhny Tagil on Sept. 9. “We, at least the Russian Foreign Ministry, are under no illusion that the sanctions may be lifted or alleviated in the near future.”

The U.S. added 29 people to the sanctions list on Sept. 2 in a move aimed at tightening restrictions already in place by extending the sanctions on people and entities that are already covered, such as Russian arms maker Kalashnikov.

On the European side, however, the damage looks to be far greater. Europe may lose a total of 100 billion euros due to sanctions, according to an independent study published by the Austrian Institute of Economic Research in Vienna this summer.

While trade levels between Russia and the U.S. were low even before sanctions kicked in, one of the highest-profile U.S. firms dealing with the fallout is America’s biggest oil company, ExxonMobil.

The Irving, Tex.-based firm said in a filing with the U.S. Securities and Exchange Committee that it lost a maximum of $1 billion due to U.S. sanctions on the Russian energy sector.

Exxon was forced to back away from a massive joint venture with Russia’s top oil producer, Rosneft. The two companies had planned to start drilling for oil in the far-northern Kara sea this year.

Sanctions also mean Exxon has been unable to collect revenues from its 30 percent ownership stake in the Sakhalin 1 oil and gas project on Russia’s Pacific coast.

“In compliance with the sanctions and all general and specific licenses, prohibited activities involving offshore Russia in the Black Sea, Arctic regions and onshore western Siberia have been wound down,” Exxon said in the 10-K filing with the SEC. Exxon’s “maximum exposure to loss from these joint ventures as of Dec. 31, 2014, is $1.0 billion.”

Nevertheless, Exxon has continued to quietly acquire new drilling rights in Russia, apparently with a view to expand its operations in Russia when, and if, sanctions are lifted.

Exxon boosted its total stake in Russia to 63.7 million acres last year from 11.4 million acres in 2013, the Bloomberg News agency reported, citing data from U.S. regulatory filings. While Exxon has been forced to halt operations in Russia, sanctions don’t prevent the firm from taking out rights to new fields for future development, according to Bloomberg.

For Russia, the impact of the sanctions has been magnified by the decline in the value of the country’s main export: crude oil.

Russia, a key global energy exporter that gets about half its state budget revenue from oil exports, entered recession this year after crude prices tumbled to about half their value compared to the previous year.

Economists broadly agree that both sanctions and oil prices are damaging Russia’s economy, but many say it’s hard to say which is having a greater impact.

“It is difficult to disentangle the impact of sanctions from the fall in oil prices,” the Washington, D.C.-based I.M.F. said in a statement in August.

The agency said current estimates indicate sanctions clipped Russia’s economy by about 1–1.5 percent in the early stages, and that “the cumulative output loss could amount to 9 percent of G.D.P. over the medium term.” 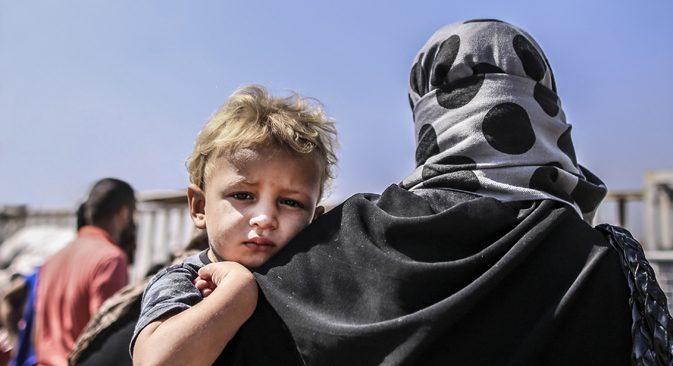 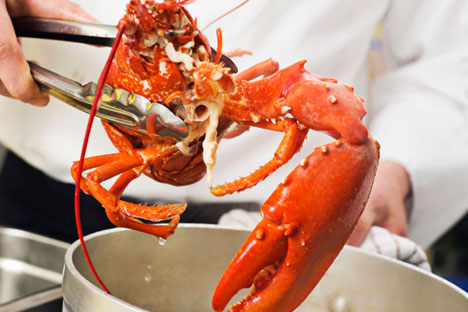