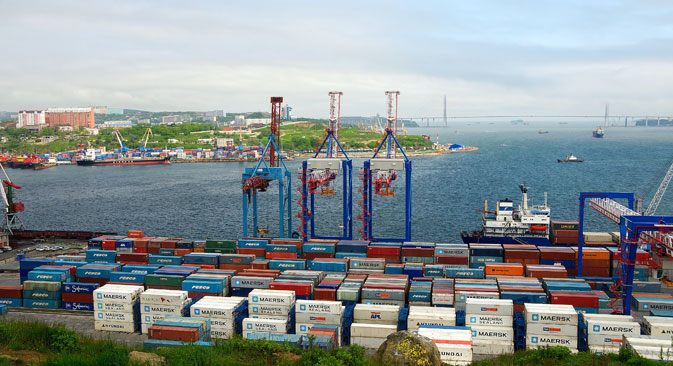 The container terminal in the commercial port of Vladivostok

Lori / Legion-Media
A Sino-Russian joint venture will invest $78.2 million in the construction of a five-star hotel. Russian officials expect a flurry of investments in the new free port zone.

The joint venture will invest 5 billion roubles  ($78.2 million) in the construction of the 182-room hotel.

"The investors are sure that the hotel will start operating in two years,” Russian Deputy Prime Minister Yuri Trutnev said. He added that a project for the construction of the Zarubino port has also been approved, but said the investor was still looking to obtain finances.

“But the investor (for the port project) has still not completely determined the financing sources, which is why the decision about the entity's status has still not been made,” Trutnev, who also heads of the free port’s observation committee said.

Vladimir Miklushevsky said the new hotel is the first step in a large-scale project to create a multimodal transportation-logistics complex and bunker hub in Slavyanka.

The Slavyanka Port is one of the pivots of the Primoriye-2 international transportation corridor running from the Chinese city of Changchun to the Russian port of Zarubino, which will be designated as a territory of accelerated development.

Miklushevsky said fiscal and customs benefits in the free port will reduce the costs of projects by 30 to 40 percent.

“A large South Korean company also stated that it would like to create a fish processing plant in the zone,” Miklushevsky said.  The First Deputy President of Dubai Port World, one of the largest port operators in the world, visited Vladivostok, and said that the company intends to invest in the development of Primorye's transportation infrastructure.

A law on the Vladivostok Free Port went into effect on October 12, 2015, introducing special rules on doing business in the region, including the establishment of duty-free import of goods and tax holidays on property and land.

The overall size of the territory that the free port regime covers is 28,400 square kilometers, which includes a population of 1.4 million people.